What are the buttons on the x carve controller for?

in all of the instructions and on line information i cant seem to find anything on the three white buttons on the controller box. Anyone help??

Search the forums. I put a detailed post about it somewhere…I’ll try to find it.

The three buttons, from left to right: 1) Feed Hold/Pause: this issues a hardware feed hold command (aka pause) to GRBL. By default on the Xcontroller, it will turn off the spindle output, turn off the M7/M8 outputs and raise the spindle to just below the machine zero position. Press the resume button to start again. 2) Resume: resumes the current program. It clears the feed hold condition. It will lower the spindle down to safety height or work zero (can't remember which), turn on the spindle…

Note: Easel can also do these things too. 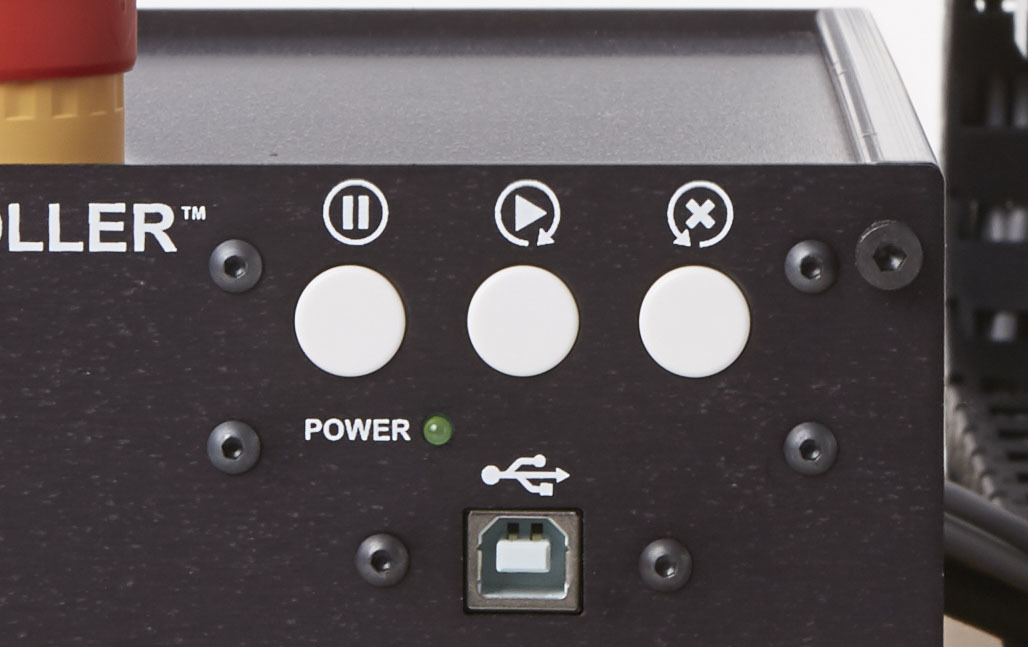 along the same lines. I paused my machine 80 percent of the way through a two stage cut this weekend. I used easel to pause it.
at the same time my wifi lost connection. so easel thought I finished carving…make sense?
would I have been able to restart where I left off?

It depends. If Easel needs to reconnect to the X-Controller Grbl will reboot and the current position is lost. We originally used stock Arduino Uno boards for controllers. They reset when you connect. We wanted the X-Controller to be 100% compatible with all those controllers, so we kept that functionality.

With that said, if you have limit switches your old zero should be saved in non volatile memory on the X-Controller. Just tell Easel you want to use the last zero position in the Carve walk through dialogs.

In general, Easel does not need the network to send a job. It needs the network to load, retrieve and save jobs. It sends the entire job to the local sender and should not care if the network is lost.

That’s weird. Because when I hit pause. The router moved back to zero, and easel asked me the finish questions. If it looks good, etc.

Basically, when I hit pause the controller and the cut thought they were finished.

We originally used stock Arduino Uno boards for controllers. They reset when you connect.

I apologize if I have jumped into the middle of the thread, but I think this is a little bit of a misconception. An Arduino board itself is not the deciding factor on rebooting when a serial connection is made. It is actually the application that is connecting to the Arduino board that is setting the DTR (Data Terminal Ready) line to a low state and thus causing the reset pin on the Arduino to pulse low and reset the board.

In my experience, if the application you are running/ connecting to an Arduino board has the ability to Disable DTR (Windows) then you should be able to connect serially to the board without interrupting the board and it will continue on and start communicating serially if everything is set up correctly. There are also hardware methods and I do believe the newer boards come with a dedicated jumper between two solder pads for cutting/ re-soldering the connection between the DTR line and the Arduino’s Reset line. That being said, I just stick with the software method.

Note that I have not tried this with an Arduino running GRBL as I currently have no need to roll my own gcode sender (Gotta LOVE Easel!!!), but who knows maybe down the rode I will play around with it.

@BrandonR_Parker … thanks for adding that

Having designed the X-Controller I am pretty familiar with this

We actually had some discussion about it and decided it was better to have the same behavior as the Arduino. The main reason this is done on the Arduino is that it allows the Arduino IDE to cause the reboot and trigger the bootloader so you can program the board.

When designing the Carvey controller I requested that we break from this tradition and not reboot at connection. The Carvey has some nice fade on lighting. It would not look nice to have that blinking on and off with every connection. This meant we had to solve the bootloader programming problem. I actually rewrote the the bootloader. It was a bit of an intimidating task to attempt, but it was not too bad and works fine.

When going through the carve setup procedure i am shown the arrows to move the head along x,y,and .z axix. My question is… Is there a way to be able to call those arrows up so you could move the router around manually especially after it finished a project! It goes home but i have to shut the controller off to manually move the head out of the way to get at the work piece!

@TimothyByrne Try clicking “Carve” to get those arrows, use them, but cancel out before running the job.