What could have gone wrong here?

The machine was zeroed correctly. The only issue I can think of is that this file was exported from illustrator first as a DWG file and then to an SVG file. I did this in order to preserve the open U shape cut. 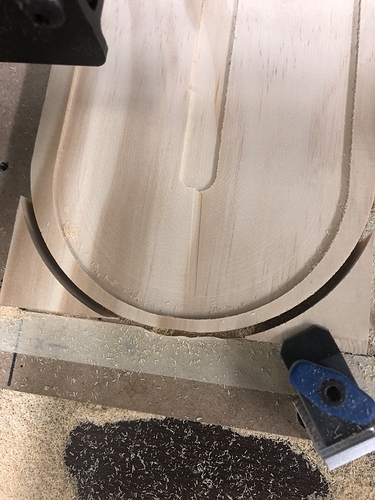 If you have a dust boot could it have got caught or pushed against the clamp?

I don’t think it was a mechanical problem, because the cut was too smooth. EDIT: I don’t have a dust boot.

I don’t think it was a mechanical problem

If you share the project, it’ll help with any gcode issues, but it doesn’t look like an issue with the toolpaths.
Loose collet?
Work being pulled up by the cutter? It’s only clamped on the corner.

The board didn’t shift position; it’s very firmly clamped down off camera. The collet also wasn’t loose (I made that mistake exactly once.)

Also, I MIGHT have originally converted the file to .dxf, not .dwg in case that makes a difference.

Here’s the link to the project. http://easel.inventables.com/projects/Xhox2Ydxj7BWZ6jbZn735g

I’m going to try it again tomorrow without any intermediate file conversions.

The board didn’t shift position; it’s very firmly clamped down off camera

I’m taking about it being pulled up in the middle, but I’m not as convinced now that I see your stock is 3/4".

The board did not change position at all. It’s clamped securely and there’s a 30 lb lead brick holding it flat. I’ve done this same cut several times before and never had this issue.

I can tell you it’s not the gcode.
I would say it’s mechanical (possibly electrical affecting mechanical), but you’re sure it isn’t.
Have you checked the pully on your Z-axis motor?

@BillBlades While I agree with you, the OP said he’s carved this same carve several times before and the gcode does not show what he’s seeing.
@JosephStevens You’re cutting that profile before you carve the pocket. I know you said the material is secure, but that clamp won’t do much when the profile is cut. And, if your tabs stay intact, being 1mm thick, they are on that left side where there is no clamp. 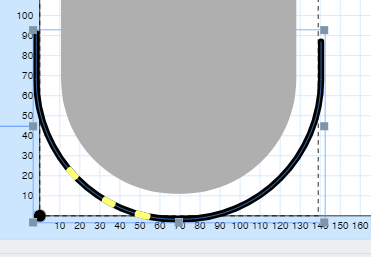 I’m sorry, I should have been more clear. I’ve done this cut before, but this is the first time I did the cut from an exported file.

That doesn’t really change that the gcode shows toolpaths that would cut what the preview in Easel shows.
I think the file is ok.

Further evidence of a shift is the pocket cut around the radius. Compare the pocket to the profile. The cut narrows and the project calls for it to be concentric. Looking at your last picture the uncut portion is thinner at the bottom of the picture (6 o’clock) than it is at the sides (3 and 9 o’clock). EDIT: Sorry Neil, I don’t know why it replied to you. I meant it to go to @JosephStevens