What in the world is this issue?

Sorry if people have posted about this before but I dont know what to call this so I couldn’t search for it. However, it appears when I mill something that has flat surfaces like a very wide pocket or just surfacing something, easel seems to make the x-carve do strange things on the z-axis. I’ve noticed it before but never thought much of it until I noticed it becoming really obvious. Its almost like easel tells the z-axis to step down a few thou when its supposed to be milling a perfectly flat region, and leaves strange carving artifacts where parts are raised and lower than others. Take a look: 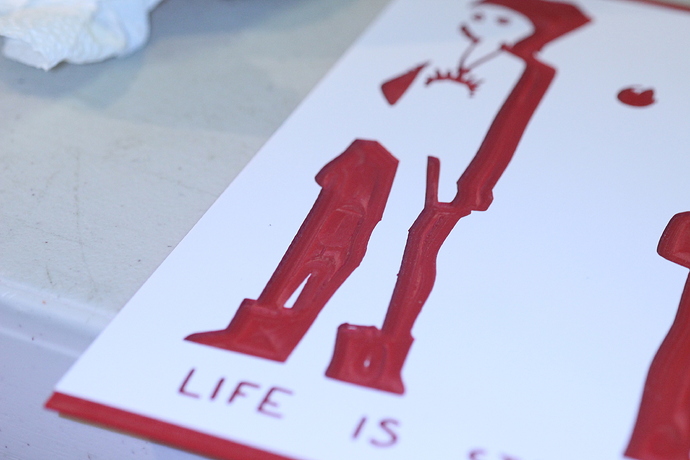 Also, it seems to be more noticeable when milling at high speeds, this was done at 100 ipm. Maybe easle can’t handle HSM well?

Could it possibly be electrical noise from your AC cable on the Makita sending feedback and causing erratic Z movement?

I ask because usually cutting tool paths in Easel only have an X and Y component. You could looks at some exported g-code to verify that it isn’t telling the machine to make Z movements during those flat areas.

If that is the case, then you know it is hardware related and not software.

Ah! Didn’t think of that, that could certainly be an issue, considering my makitas power cable was zip tied to the stepper cables… So I rerouted the makita cable away from them and I tried the file again. It still seems to be a problem though

The z axis and y axis motors are still tied together, should those wires be kept separate as well? All I rerouted was the makita mains cable. Also, I opened the G-code .nc file easel gave me, and I have no idea where to start to tell if easel is doing it, Its like an entire novel of screen filling letters and numbers, and I’m not entirely sure where to start.

My guess would be that something is loose. Either a motor wire, a pulley set screw, a V-wheel, or the Z axis belt.

I have all of my stepper motor wires in the drag chain without problems.

Yep, that is what I was going to suggest next. Go over all pulleys and check you set screws especially the Z-axis pulleys. Also look t see if there is any play in the up/down movement of your Z. Check V-wheels and all that stuff…

That was happening to me too, it was the z pulley. It wasn’t all the way down. There was about 1/16 gap maybe less and it was causing an uneven surface. Just loosen up your set screws and push it all the way down. That might fix your problem. At least it did it for me.

Hmmm, I went over everything, and the v-wheels are all nice and tight on every axis, belts are tensioned, and the set screws aren’t slipping

Definitely not sure at this point. maybe faulty g-sheild? Also, my motor wires are together in the drag chain, but that is the shielded section of the wire, so no interference. I tied the unshielded excess x-carriage motor and z-axis wiring together.

Might be the unshielded wire tied together. Can you post a pic so we can get a visual on exactly what you mean? 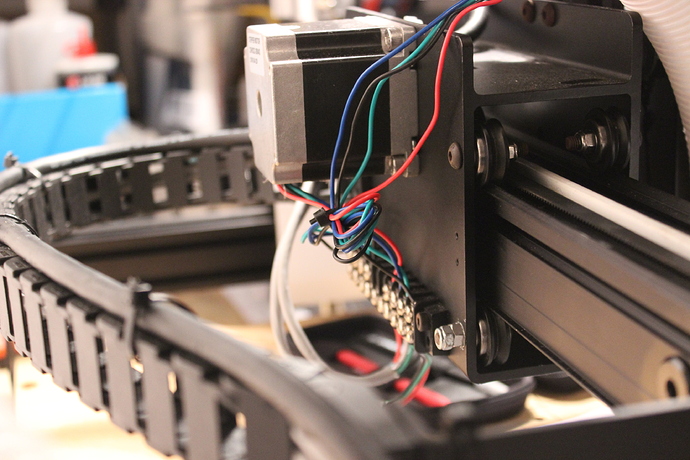 Yep, I would definitely unwrap those… while you are at it you may want to put some heat shrink on the Z-axis just as an extra added precaution. Then give it another go.

I don’t know if this will solve the issue, but it seems like it could be caused by it.

My set screws were nice and tight with no slipping too, move your spindle up and down from the top nut and see if you have any movement going up and down. The tiniest movement will cause that.

I do have a bit of movement, but it appears to be the axial play of the ball bearing, as the nuts that tighten the threaded rod are very tight against both sides of the bearing surfaces. I would say it barely bumps upward when i push the z towards the ceiling.

That could do it as well… you can help this by loosening your set screw on the pulley at the top of the ACME rod and then pushing down on the pulley until there is no movement and then retightening the set screw. Then tighten the nut down on top of it some more (it should now move some)… you can hold the pulley or ACME rod still with a wrench with a towel in it’s teeth so you don’t mar anything.

Ah, I should have noted I have the M8 rod. Either way, I have tightened the nuts on either side of the M8 rod but the bearing still has a small amount of lateral play, but nothing much, just a very slight bump that I think has always been there since I first assembled the machine.

If you are using the low cost spindle, it may be an EMC issue. I had strange moves in y-direction. Have a look at Chatter Issue and scroll down to the bottom.

Did you ever get those stepper wires isolated from each other?

Well, apparently it was just a a faulty firmware issue, inventables had new firmware and now it cuts perfectly level!