What is going on here... Help

So recently took most stuff apart squared the Z access and surfaced my spoilboard. Then I placed this piece of Hard maple wood and surfaced it too. But I am getting these high spots inside of my carvings (middle of letters and hollowed out part of Raiders logo)… I figured my 1/8 bit could be dull, so I jumped over to a 1/4 bit… It shaved some off but not all. What could be the problem now? 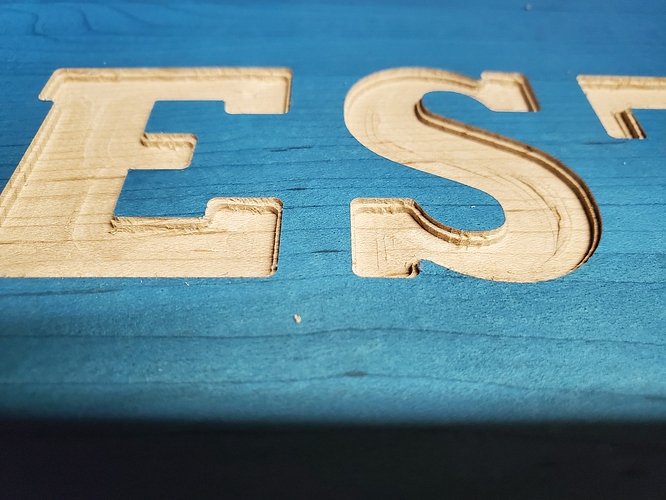 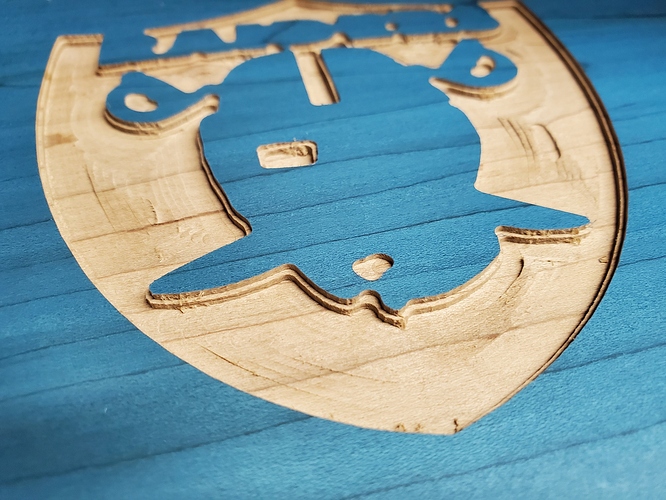 So you reran the same job on the same workpiece and it didn’t clean it up?

Do you have a dust shoe? If so, make sure it isn’t making contact with the workpiece…leave a few mm gap.

Yes re ran the job but changed the actual bit both physicaly and in easel. The 1/4 bit ran the same paths. Like if I had designed those ridges in the flat spots.

I’ve had lines that sometimes would be left behind until I started leveling and surfacing. This almost feels like 3d round overs.

I’ll try the boot thing. Should I try a different cut style? I think I am running Raster

You’ve got some flex somewhere.
Does your Z have any up/down play in it?

No movement. Had just retightened everything. Guess I’ll do it again

Did you try without the dust boot? Or with it raised?
Depending on your system, there could be enough flex caused by the dust collection.

Is your 1/4" bit actually 1/4" and the same question for your 1/8" bit. Check them with your calipers. Which of the two paths was cut with with each bit upper and lower?

Both ran same paths and missed same spots. Which is wierd since I surfaced the board prior with no problem. Leading me to believe it is a z axis problem. Starting to get annoyed, but it is what it is.

Purchased a Onefinity because of belts, wheels and z axis problems that keep coming up. I’ll keep the xcarve as a secondary/backup and love easel pro but I am disappointed about these problems that keep coming up. Only have about 12 projects run through the machine with lots of down time,(due to torn belts" and or moving my zero during tool changes) keep spare belts…

Thanks for the help.

It would be really nice of you if once you get your Onefinity machine you could post your thoughts on it. I have seen several videos of the machine and it looks very nice and sturdy. Now that you have both it would be great to hear what you think and how it compares with the X-Carve.

. However I won’t receive until Dec.

We’ll be waiting. Hope you will enjoy it.