Comrades, any suggestions as to what is causing the spindle to shift would be gratefully received. I have a XC1,000 running the standard 300w spindle, belts have been heat shrinked and I checked all wheels, screws etc before starting this carve. Things started ok until about 40% through the carve when the spindle cut a couple of deeper holes (visible on the left hand side) and then started carving the pattern two inches away from where it had cut previously. When I cancelled the carve the spindle returned to the home position but was exactly two inches north of the actual starting home position.

To date because of recurring issues I have been restricted to test cuts so the spindle has not been overworked but it now needs a flick to get started (I have been offered a replacement but am considering switching to a Dewalt/bosch and this will be the subject of another question shortly).

Any ideas? I have not yet played with the pots.

I think my belts are ok if anyone has a XC1000 I would be interested to know how much play they have in the belts in the middle of the rails if the carriage is pushed to one end. I find references to “guitar string” almost meaningless because I could tighten them to play a high note or a bass note…the difference in tension is huge. 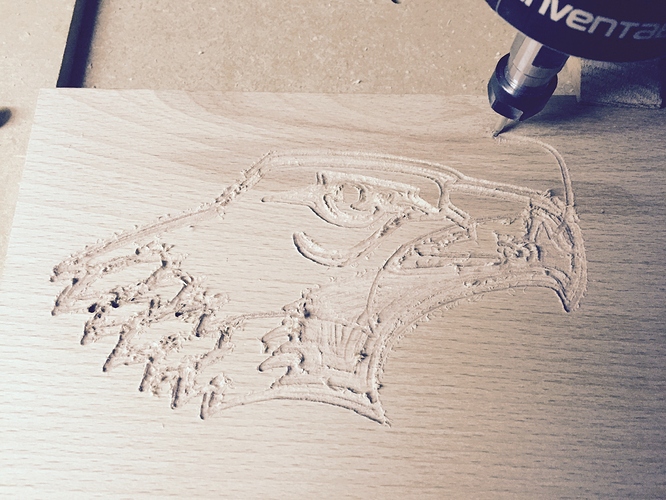 The spindle is probably failing. The “flick to start” is the primary symptom. As it fails it generates more RF interference that causes the stepper motors to have extra moves. Hence the “Drift”.

If you already own a Dremel you should be able to put that in the stock spindle mount.
That will let you test and adjust you machine while you are waiting for whatever replacement you decide on.

Thanks Aaron, I’ll try that.
Loose belts has also been put forward as a possible cause. The way I have my belts tightened at the moment is that with the gantry at one end in the midpoint between the gantry and the other end the belt lifts by about a fingers width…is that too loose/too tight?

Sounds about like how I have my belts tightened, and they have given no trouble at all. I’d strongly suspect a dying spindle, myself. That offset is awful precise to be slipping belts.

EDIT: Just switch to the router, man! It makes the XCarve into a totally different machine. The improvement is darn near unbelievable.

Dan,
I have come to the conclusion that I need to change to a router , the question is which one?
I have searched the tool suppliers in the UK and I suspect that the Dewalt 611 and 660 are US machines as I cannot find a UK shop that sells them. Ditto Bosch Colt.

From what I have heard, you are correct. They ARE available, but they have a different model number. Probably ROHS issue or something like that.

EDIT: Just confirmed that with a Google search.

I kept “plucking” mine until the tightening made it change tone.

You are not the first person in the Uk having difficulty sourcing a router. I think there are UK equivalents but they may have different part #s? Some have used Makita.

Dan
The Dewalt D26200 looks like a fixed base machine, I’ll look to see if they do a demountable version.

The Dewalt D26200 looks like a fixed base machine

That looks like the right one. “Fixed Base” as opposed to “Plunge Router”
It is the same motor unit just different housings, which you won’t be using anyway.
In theory you should be able to just get the motor assembly without any kind of housing for a little less. (I picked up a fixed base version at my local hardware store, the theoretical savings was not worth tracking it down and special ordering it.)

Aaron is correct, the “fixed base” just means the base can’t plunge. It is still removable, for bit changes, etc. That is precisely the same base my 611 has.

almost guarantee baring some weird mechanical issue youve missed that it is electrical noise interference from your spindle. i think you are on the right track by switching to a trim router.

It’s 100% definitely a failed spindle. No question about it. It’s not failing…it has failed. As soon as you have to push start it, and have noticed your steppers drifting, it’s already gone. Go for the DeWalt upgrade - the only regret you’ll have is that you didn’t start off with a trim router installed in the first place.

TimothyHanson,
I am going down the Dewalt road.
Inventable’s customer service have been v supportive and will ship out the mounting

I will spend the time while it crosses the Atlantic researching VCarve and PhotoVCarve (and the best way of transmitting the code to the XC) because I think they will be the next upgrades.