I’ve read thru the forums, but don’t see this issue. I have just set up my x-carve and the x axis seems to be working fine.

However, the z-axis “slips” on the calibration test. The ACME screw spins but the motor seems to get stuck - the spindle with the belt on it doesn’t move.

On the y-axis, the wheels “catch” - even when i unplug the machine and gently move the x carriage up and down on the rails. I’ve checked square of x to y and adjusted all the offset washered-wheels to all the way loose and all the way tight and 873 versions in between.

Really frustrated as I have already screwed up my first g-shield by soldering the pins on upside down - so i got a new g-shield installed. Just mentioning this in case it has any bearing (although seems odd that it would). All the lights light up when things are powered on. The calibration test shows that the motors are connected and (trying desparately) to move in the correct directions.

I have uploaded videos so you can see (and hear) what’s going on (if you have the time to take a look).

I was so excited to get it actually running that I tried an initial carving - you can see the problems immediately impacted the y axis behavior on the e. 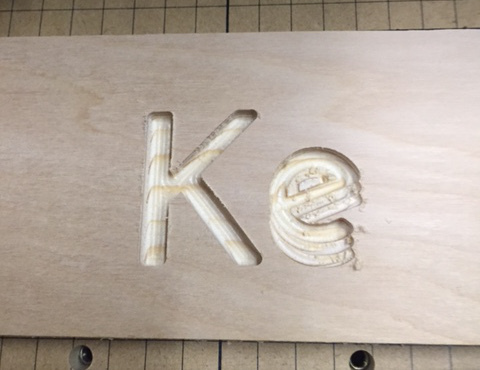 Any insights/suggestions would be most appreciated!

on the Z, are you sure the set screws aren’t loose and the motor shaft is moving but not the spindle?

Did you make sure the Z axis screw and nut moved freely?

Sounds like the belt might be binding on the Y, can you make sure the belt rides the middle of the spindle and not rubbing against the edge?

thanks -
i think you were right on the belts being too tight on the y axis - i fuddled with them and it seems much happier (less noisy, anyway).

on the x i double-checked the set screws - all tight. I also determined the the spindle and the wheels are not moving (rather than the wheels spinning on the shaft).

i tried another cut - reducing the depth to 1/8" overall just for a test (since the “stickiness” seems to happen at the top of the z axis. then this happened: 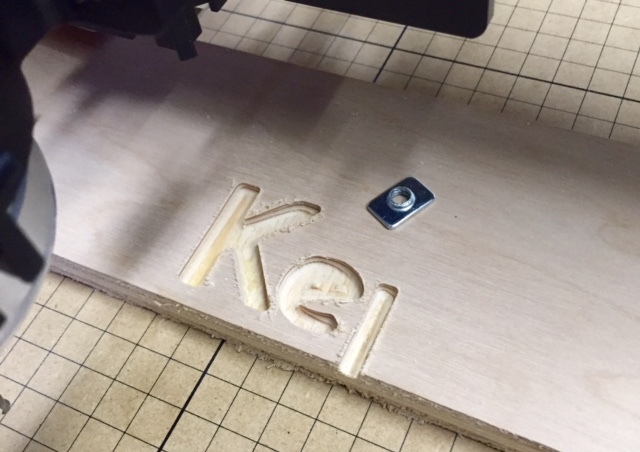 it looks like the entire “drawing” shifted down a half inch - the top of the “l” started 1/2" too low and machine was cutting in air for what was the bottom. . . sigh.

right now i’m back to step12 to figure out where that thing is supposed to go and re-look over my work in that step.