Where is the laser engraving category?

Just finished this Aztec Calendar with our Shapeoko 2 & 6W laser diode. We burned it hard and slow so it would cut into the Birch Ply at a slight depth. The original image was blurred slightly to smooth out the laser beam’s cutting paths. It’s 7.5" X 7.5" in size and it took 3:44:56 in time to engrave. 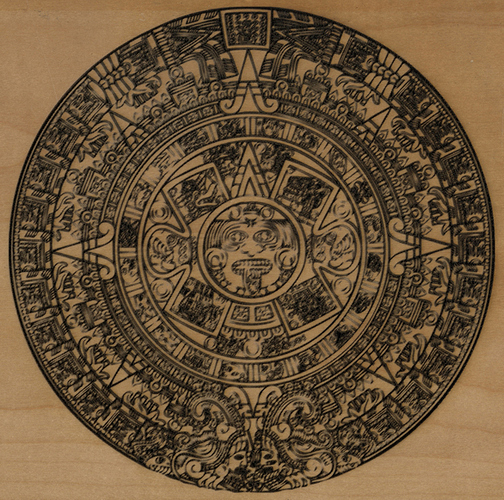 Here is the original image if you want to give it a try in the Inkscape plugin.

what do you think of the new 3.8w laser kit from J Tech?? This laser produces an amazing 4.2W of power at MFG recommended settings of 2.5amps! (this laser is the same as the older 3.8W, just improved output) Engrave on wood, leather, acrylics, and many other materials! Cut thin and non dense woods like...

We have not tried the 3.8W. The 6W unit on our Shapeoko 2 we built ourself. We only have used the 2.8W kit from J-Tech in the past and it does real good to engrave photos as seen in previous posts in this thread.

The problem with the higher wattage laser diodes is the divergence (beam size when focused) is larger and does not give as much detail when engraving photos. However they do cut materials easier/faster because of increased burning power. Like I said, we have not tried the 3.8W, but I do know the divergence is larger then the 2.8W, but is smaller then the 6W we are now using. We have tried to engrave shaded photos with the 6W, but the quality and detail was not to our quality standards.

We built this unit to mainly speed up the 3D engraving process shown in our thread here:

With our experience, the 2.8W is good overall for engraving photos and cutting if you plan to do both.

On my test calendar: 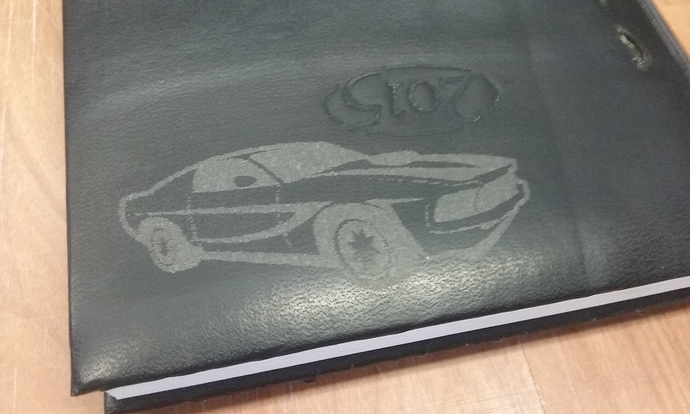 And another fast test on wood: 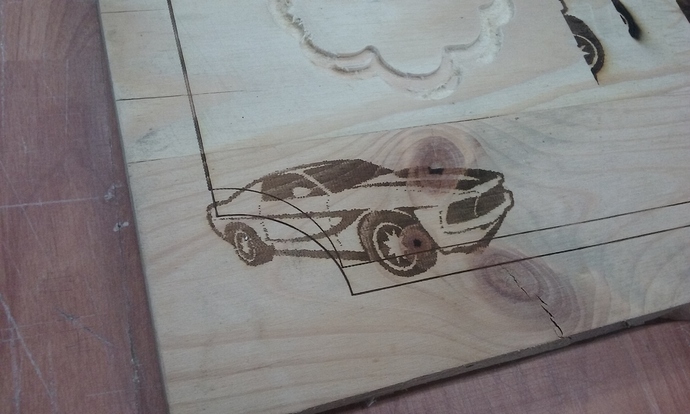 Looks good Hugo. Does your laser driver have PWM or TTL laser control? Try dithering your image first in inkscape and it may give you the illusions of shades by pulsing the laser instead.

Yes. My laser have PWM control. Good idea… ill try that in work 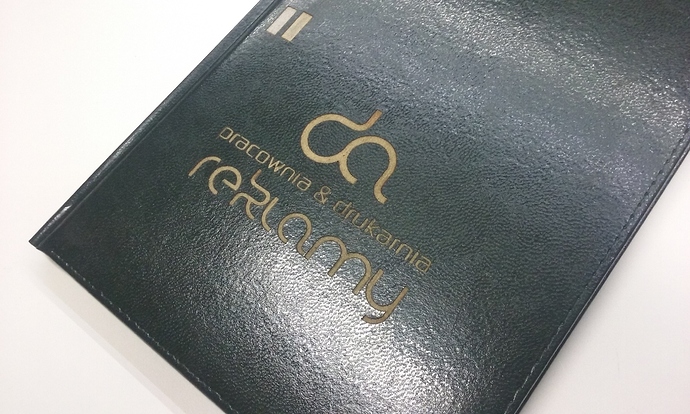 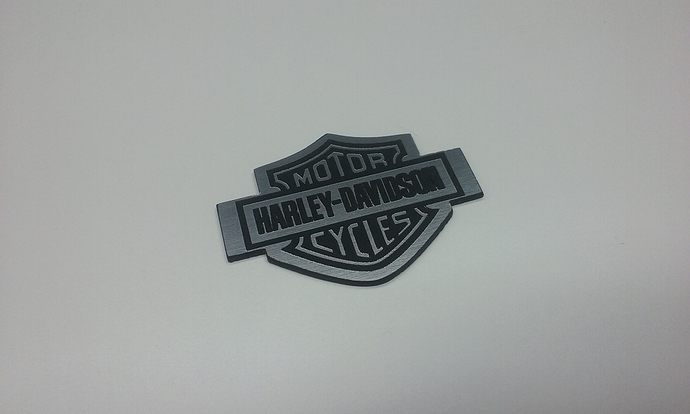 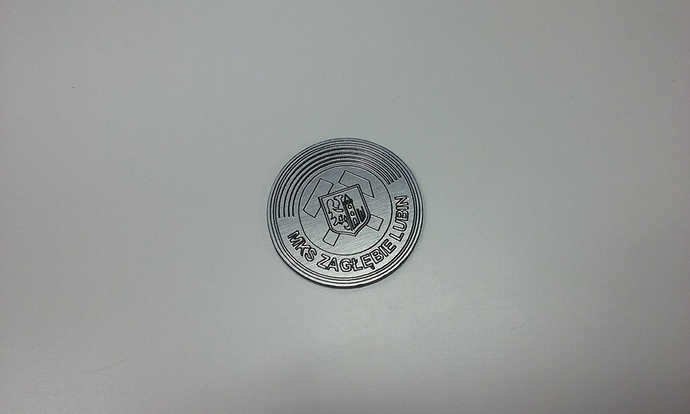 We have been doing some extensive testing with a pre-released version of PicSender. This was raster engraved on Birch Ply with our 6W 450nm laser diode on our Shapeoko 2. A variable feedrate was set between 200 IPM (white) and 150 IPM (black) using our Feed Rate Change feature in PicEngrave Pro 5. 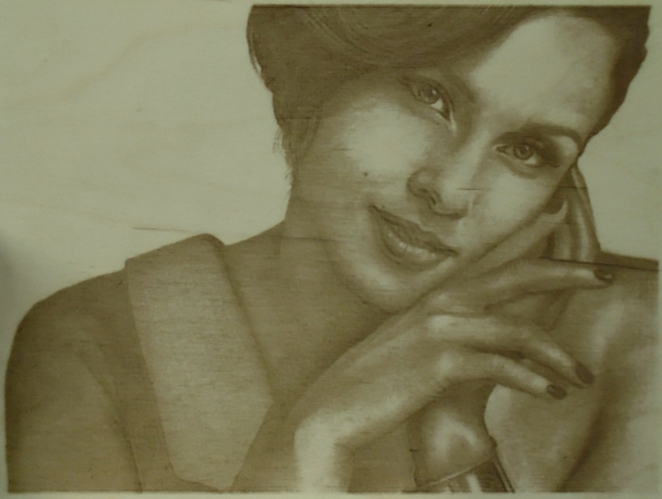 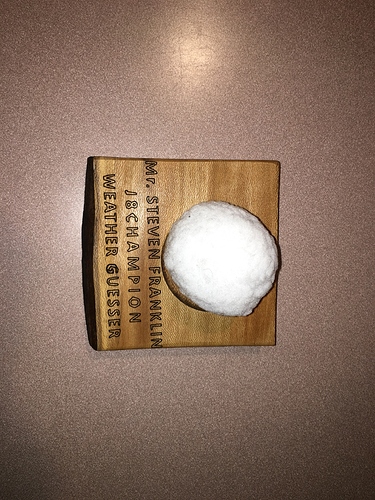 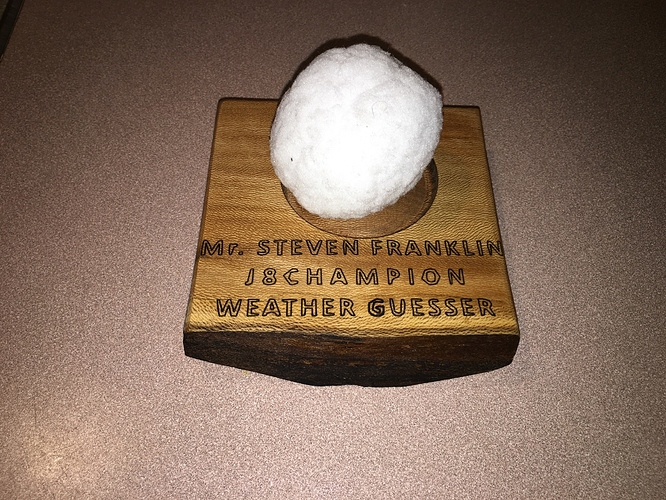 A real quick little project for the office. We had several predictions of how much snow we would have in the past two winter storms that came through the area (northern VA). The guy who ‘won’ didn’t realize I was going to make him a trophy so it turned out really well when I presented him with it. I think it may have been the first recognition he had in quite some time as a contractor. It made his day.

Made from a scrap 1" thick cherry piece of wood. The 3" diameter cut was from V-carve software and an 8mm bit (~10 mins). I used Inkscape jtech extension to create the grbl for the text. I find that I have to create the text in Powerpoint, save it as jpg, bring it into Inkscape and use the bitmap tracing feature in order for the jtech extension to recognize the path. I am likely doing it wrong but it works for now until I learn more about Inkscape. I used 200 IPM and full power (254) with the Inkcape settings (~10 mins). This is the first time I used the laser on cherry wood. It turned out really well. The snowball on top was from a bag of 8 ‘snowballs’ that Walmart was selling on their clearance rack for $2.50.

Here is a small sign that I made using the JTech 2.8W Laser mounted on my X-Carve. 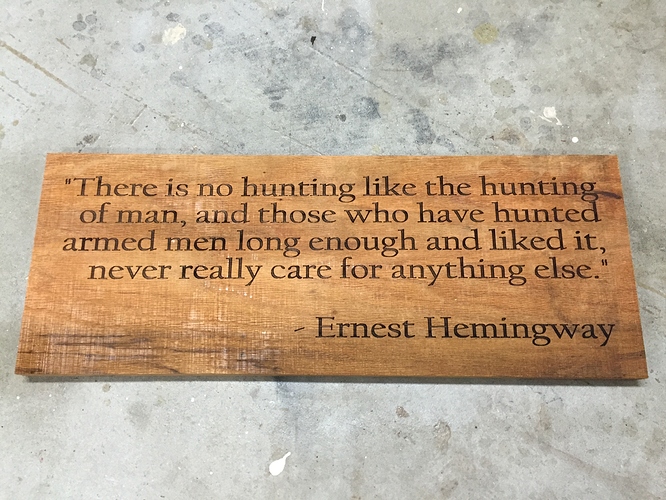 What software You use Mike?? you make some bitmap and send to pic engrave?

I am playing around with a couple software options right now. That one I used Aspire with the JTech Laser post processor. I have also had good results with Laser Etch. I am still trying to get good results doing picture engraving with laser using PicLaser Photo.

Awesome Mike. I haven’t been able to upgrade from the v-carve to aspire yet. I am jealous. I have grown accustomed to using the Picengrave tools so prefer them overall. I did try to use Vectric photo carve to make the litho once but found it took longer. I only tried once so I don’t have a lot of data points to go from. Let us know how it goes with the different tools.

What version of grbl are you using with our PicEngrave Pro software?

I am using GRBL 0.9j and I know that JTech has said there might be issues with photo engraving but I think the issue is more the photos I have tried to engrave. One was an old B&W photo that turned out really dark. I am open to any suggestions you might have.

With the laser, wood type matters as far as darkness and speed of the laser moving across it. The Picengrave have been a very good source of info so I don’t want to take away any recommendations they have. I noticed cherry, pine, and plywood take the laser pretty quickly so darken up faster. I would increase your speed for the laser/CNC machine movement to reduce the darkness. It is challenging and perhaps time consuming but a quick practice run on the same wood you are using does help.

First, the standard GRBL 9j is not set with the proper PWM frequency for the J-Tech driver. It will require a higher S command value & PWM voltage before the laser will even come on. With this scenario, you are loosing the lower modulation & shade range, so your over all engraving will be darker.

Second, the GRBL 9j does not execute the S commands in real time. It has a slight dwell on every line of gcode. You can overcome some of this dwelling by increasing the accels for the X&Y, but it will still dwell and effect the outcome. By not being able to get up into the higher feedrate range because of the dwelling, it will cause your overall engraving to be darker too.

Vector cutting & engraving with Black & White images where there is only two laser power S command values or just M03/M05 for on/off in the file will work fine, but when there is varied S value commands on every line of gcode, it will not give you very good results no matter how good your original image is.

Have you tried the J-Tech LaserMode PWM GRBL yet? Some have reported it does not work with the X-Carve’s UNO, but I purchased one from inventables and I have not had any problems with it. It works flawlessly with the J-Tech GRBL. I used it with the last engraving I posted in this thread.

I know it is not desirable to switch back and forth to different versions of grbl, but with our PicSender & the XLoader it’s quick and easy. I got it down to 1 minute 15 seconds and that is even changing the grbl settings for the one I will be using at that time.

So the X-Carve functioned fine with the J-Tech GRBL? What spindle where you using? I may have to try this out and see what kind of results I have.