Where is the laser engraving category?

Thanks Rick for chiming in.

There are ways for improvements as Rick mentions. Pine is will engrave black & white without issue, but the image must be Dithered in the PEP5 image editor first. We always sand across the grains with fine sandpaper with any wood we laser engrave images on. Grayscale engraving is better achieved on less prominent grain woods such as Poplar so the burn/shades is more linear.

Looking at the original text, I can see some grayscale, but it may be because it was attached as an image here on the forum. The Threshold Dithering Algorithm works best for B&W logos or text providing the DPI of the image is not too low. A minimum of 100DPI is recommended and the PEP5 image editor will save at 100DPI. But, any image needs to be edited & resized and saved first before reopening it to Dither the image. If there is not just pure black & white in the image, there will be ramping of laser power on the edges which looks like what could be happening. Look in your gcode file and see if there is any S PWM values other then S0 & S255. If there are, the image is not pure 1bit B&W.

The focal point size (.006"-.007"), focusing height (3"), beam orientation (parallel with the engraving angle) and the engraving angle itself is important. As Rick stated, a 45D angle works best for motion smoothness when raster engraving running in grbl and because 45D brings the burn lines slightly closer together. On post 85? in this thread, I have some recommended grbl settings changes.

The Un’-burnt line almost looks like a PWM connection was lost on that pass, but it’s hard to really tell what actually happened there.

When raster laser engraving with grbl , the Analog/PWM engraving profile is recommended as it has the most features. Select Skip White when using B&W Dithered Logos or text as it will cut down on engraving time. Also the Feed Rate Change feature will speed up the feedrate in white areas and slow to burn in the black areas. You can start out with a feedrate at 150IPM? and use a FRC of 40%?. You can experiment with these values to get the best engraving results and cut down on your engraving time too.

To supplement what Jeff posted above about the minimum recommended DPI:
Looking at the original image, I am pretty sure that the “jagged” edges of the letters are being reflected in the laser engraved image’s “jagged” edges. This can also be caused by excessively enlarging a small image into a larger size for engraving. I often redraw (trace) a smaller image to a larger size using an image editor such as Inkscape to eliminate the jagged edges.
John
www.picengrave.com

What You need to know ?

I posted this in another topic, but hasn’t gotten any traction (and I’m not the most patient

Just got the JTech 2.8w laser, and trying to figure out good starting points in terms of feed rate and number of passes to cut various materials. Any references for this sort of thing? Know it’s going to differ per person, but need a starting point otherwise I’ll waste a bunch of material guessing.

Any help is much appreciated.

Thanks @RickPeterson @picengravertoo @JohnChamplain for the quick help. I have some poplar so I’ll give it another try this weekend and see the difference. I will try some of the settings you mentioned and 45 deg also for direction. The missing line is a separate issue I am already resolving. My lens is quite wobbly relative to the laser body so as the machine starts and stops it can shift enough to miss a line. The recommendation I got from the JTech crew was to use teflon tape on the threads. I am going to look at that as well as find a little stiffer spring.

The image I used for this was actually mostly grayscale (it’s an ultrasound). The text however was black.

@picengravertoo I had already updated the settings to your #86 post. I had also had the laser focused at only 1" which is what the Jtech stuff said. I will change to 3" when I redo as well.
@JohnChamplain I actually made this in Inkscape. What format do you find to export gives the best results?

Here is a full picture. From further away it doesn’t look terrible but I know it can be much better. 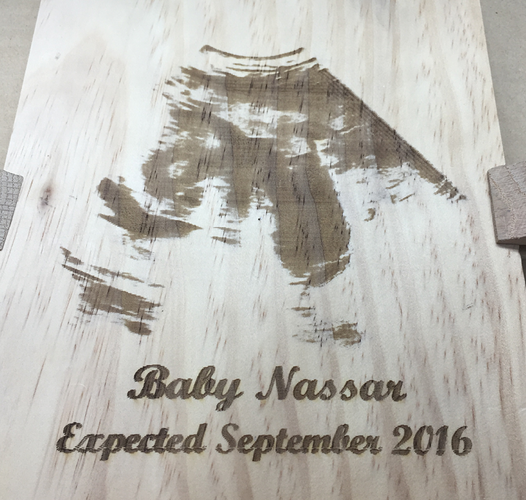 I was not aware there was an image with your text. The Atkinson dithering algorithm should work better then Threshold when lasering on Pine. It’s adjustable.

Ok so to start I didn’t flash my Arduino because i’m not excellent with computers and don’t wanna tamper too much. Easel suits me very well.
So far i like Inkscape and mainly want to do logo’s mainly. To start my laser I press M03S1200 but as soon as I sent a file to Gcode it moves but doesn’t turn the laser on. If i enter M03S1200 it only flashes the laser on for a second so I end up turning it on Manually. NOT ideal. Any help is greatly appreciated. Do I have to flash. Will that mess up Easel?

I advise against teflon tape. I found it messed up my lens because I put too much on (which isn’t hard to do) I now use hot glue. One ball on each side holds great and it is very easy to remove if you need too. This tip came from Jeff and was a lifesaver with my new lenses.

What are the standard X-Carve GRBL settings (for when we need to switch back to GRBL 0.9j)?

I know the JTECH Settings are here: http://jtechphotonics.com/Downloads/Xcarve/x%20carve%20settings%202.txt

I've been helping folks get their X-carve machines up and running. I've learned a lot. One of the things that I have noticed is that the grbl parameters seem to be inconsistent, especially when the Arduino has to be re-flashed. Long story short I wanted to find out exactly what the defaults should be. I took a new Arduino and used the EEPROM clear example program to clear the contents of the EEPROM (1024 locations), compiled the source code for Grbl 0.9j, downloaded to the Arduino, then ask …

Not all of those settings are correct for the J-Tech PWM firmware to raster laser engrave images/logos.

Not all of those settings are correct for the J-Tech PWM firmware to raster laser engrave images/logos.

That J-Tech article with the grbl settings relates to grbl 9g which was the standard firmware version for the Shapeoko. The X-Carves grbl 9j does not even have $14=1 in the settings. I believe it’s more of a reference of standard settings when flashing the J-Tech PWM firmware like the axis steps/mm. Except the Z axis steps/mm may not be correct depending on what pitch screw the user has.

As you know, I have referenced what performance changes that is recommended to the settings for the J-Tech PWM grbl 9g firmware in this thread for raster laser engraving images/logos.

Hi all, I’m not sure if this is the right place to post this as I’m new to the forum and new to X-carve/laser.
Honesty first, I’m lost in a sea of information.
I have a 1M x 1M x-crave, dealt router and the Jtech 3.8kw laser, I’m trying to run the laser from a Macbook Pro, however I am terrible at understanding the software side of things. hence reaching out to you/anyone for advice here.
All I need my laser to do at this stage is basic etching of text and cutting of 1.5mm ply for my business cards, however I can’t find a step by step on how to set up my Macbook Pro to use the laser.
I’ve tried using Inkscape but I’m having no joy at all, it keeps saying it can’t find the directory?? can anyone suggest an ‘idiots guide’ to set up for mac please?
Thanks in advance, Jamie

hi jamie,
I’m also new on this forum. I’ve just buy an x-carve 1000 and a 3.8w laser. last night I light up the laser.
I connect control signal from laser driver to 24v dc spindle control from power source (its about 2 pins green connector) and from easel I choose automatic spindle control and 24v dc for spindle type. to start carving you need to give a depth even is not useful for laser engraving.
I’ve not tested yet, but if you give a value for rpm you could control the power for laser. who is older here can confirm. or not. with easel don’t have too much options for laser, but could be enough for some.
how I already said, I’m pretty new and sorry if I give wrong information.
don’t forget to use glasses to protect your eyes, most important.

Hi Lulian, thanks for your reply, I’ve managed to get everything working, but don’t ask me how, I think it was luck.
Still a lot to learn but reading posts on the forum is helping.
Have fun with the Xcarve. 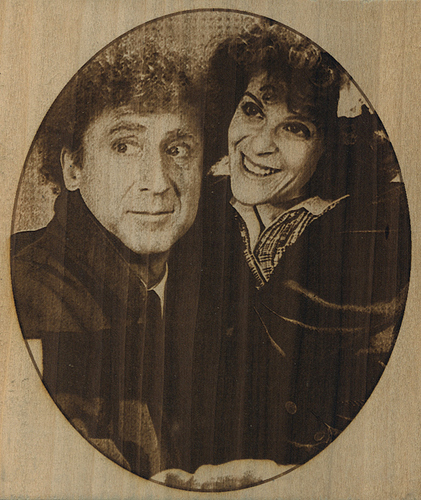 Laser engraved on 12"X12"X.125" piece of Birch Ply with our 6W Shapeoko 2 using Larry’s MultiMode grbl 1.0c that can be downloaded from here…

The 1,237,164 lines of gcode was generated with PicEngrave Pro 5 and streamed with PicSender. After the engraving was finished, I used the Manual Move menu in PicSender to cut it out with the laser. 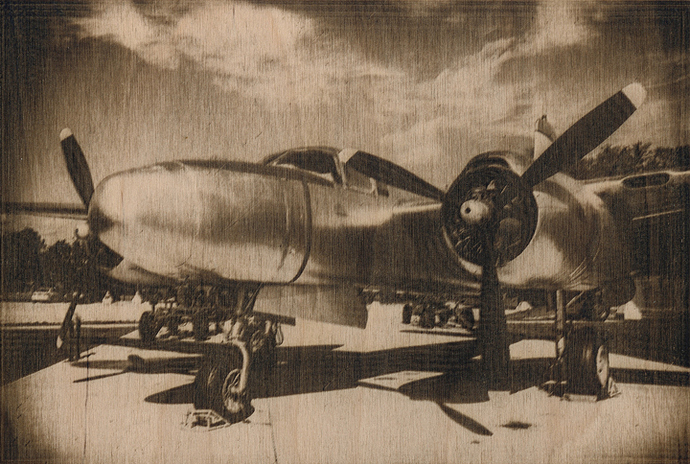 Jeff, do you recommend this update for the folks using the 2.8w laser?