I started carving the passive phone amplifier in projects and after several passes it is leaving this ring in the center of the cone… Any ideas why??? Tool paths isn’t showing it doing this. 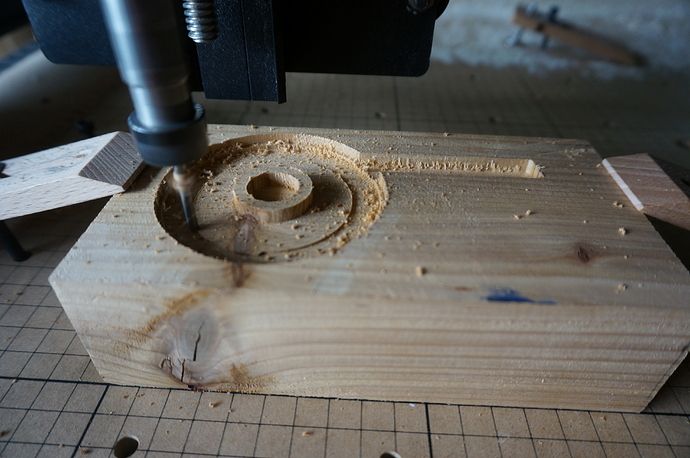 Hi
Could you upload your project file here ?

woops,you already did,I got to start wearing my glasses

yeah the toolpaths dont show it doing that did you complete the carving? how did it turn out i know sometimes easel does some werid stuff with the tool paths did it go back and cut that ring?

@WorkinWoods… I didn’t let it complete the carve being that I needed the depth cut there to provide clearance for the collet… It goes down into the carve if it cuts it correctly. Didn’t want to crash and break something. All the circles are cut as an outline on path. I made a copy of the file and modified it to cut each as a fill, but I think it increased the cut time quite a bit.

I had the exact same problem… it left a tall pillar in the middle of my cone shape… as if it were going to save the deepest cut for the very end. This ended up screwing up my entire project. I had paused the job and cut down the “pillar” manually with some cutters, thinking it would be ok… wrong.

I left the machine and came back to a random chunk taken out of the project and all the lettering significantly off set.

Has anyone figured out why it has left this "pillar in the middle? I’d like to cut another sound amplifier, but I am worried it will have the same problem…