Why the the X-Carve drift wildly all of a sudden?

Here’s a picture of my most-recent cut. This behavior has happened before but I have been dealing with other issues until now. Basically the cut is perfect until the that last arc curving up through the middle of the piece. That arc should have been lined up with the arc immediately to the right on the other side of the big hole. For some reason the router just turned upward half way to the edge of the piece.

Every other feature was spot on before this happened. I turned the machine off when it happened so it does not continue but I imagine it would have started cutting about 2 inches to the left from there on out.

How do I fix this? Anyone know what went wrong? I was watching it most of the time. I cannot confidently say it did not pause for a moment. But I am fairly certain it did not crash into anything since I was there and it did several passes on that same outer line before going haywire. 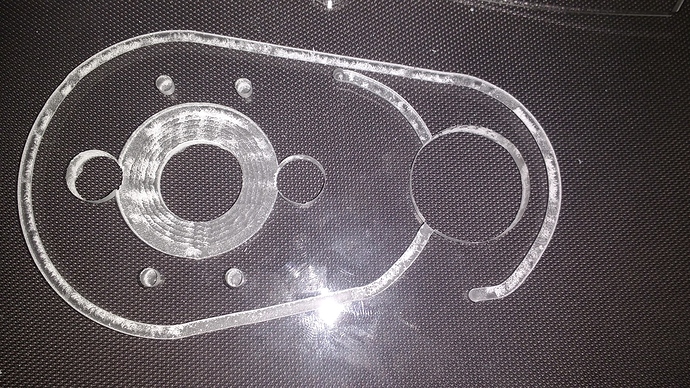 Try checking the set screw on the pulley for the x-axis motor to make sure it is tight.

I would also turn up the current on the x-axis: https://github.com/synthetos/grblShield/wiki/Using-grblShield#setting-motor-current11 …look for section about 3/4 of the way down titled Setting Motor Current. More info is located on this post: Adjusting motor current/voltage

I had that happen when my computer got an update from the web in the middle of a cut. The machine was doing just fine, and all of a sudden the bit went off into cyberspace. The computer was automatically getting a download at the time. I’ve since learned to shut off the web and disable any automatic updates on the computer when I’m cutting anything.

The problem started before the arc. Notice how the angle of the line doesn’t point toward the point where it would meet the first pass. Your X-axis slowed way down, but the Y-axis carried on at normal speed. I would suspect the motor drive overheating, the setting of the drive current pots, or the pulley set screws slipping.

EDIT: Looking at the first pass arc, it looks like the X-axis was already having difficulty there. It looks fine for a bit, then goes almost diagonally toward the apex (unless your arc was drawn that way). It seems to get better, when it reverses direction, but after the second arc, it slows down by 1/3rd or so. 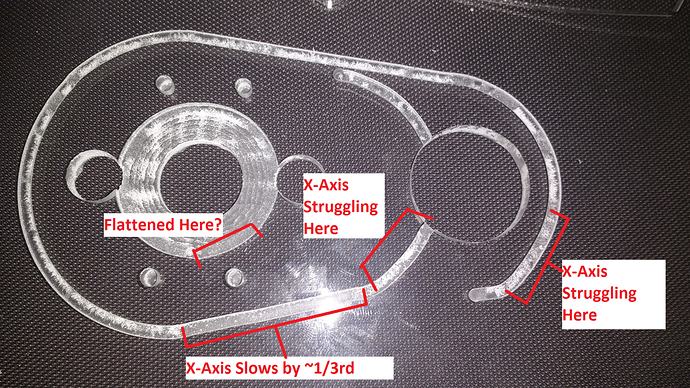 I think your analysis is spot on here, StevenFels. I should probably double check to make sure that everything is tip top with my X-axis pulleys and belt. The belt is definitely fine but I haven’t checked the pulley just yet.