Just spent an hour reading post about belt and pulley replacement but still can’t find my answer. I have a year old what I guess is called a 2nd generation X Carve with the NEMA 23 Steppers. Pulleys are pressed on - no set screw. Broke a belt today and am considering the 9mm upgrade. Most post seem to refer to the older setups and state I need to replace the idlers AND the pulleys.

But when I measure the pulleys installed on my steppers the space between the flanges measures 9.6mm. The idlers are only like 7.5mm but the pulleys are more than 9mm. Is this not enough clearance to accommodate the 9mm belts or do I indeed need to replace them too.

I was thinking if the existing pulleys would work I would just go to GT2 9mm belt. I know that is not as beefy as the GT3 but I wouldn’t have to messing with pulling pulleys. I believe it still should offer a gain over the std 6mm. Just not sure if 9.6mm is wide enough.

I am using the 9mm GT2 belts and they are plenty strong.

i too am trying to follow those threads as someone who ordered sunday and am trying really really hard to just build the stock unit before messing with anything to see what I actually don’t like (if anything). But, temptation is already there to do otherwise… esp in the 3+ week lead times right now.

If you change the belt pitch, you need a new pulley no matter what the width. I thought the stock pulley can support a 9mm belt but can’t find the drawing to support that so I am retracting that.

I changed to 2GT3 belts and they feel stronger than the 2GT2 belts and didn’t have to change idlers or pulleys.

I had to change Idlers, pulleys and belt clips. My pulleys from the original X-Carve would not hold a 9mm belt.

OK, now I am even MORE confused! Went to google to see what I could fine and it appears 9mm pulleys can measure about what mine are. If that is the case I guess I don’t have to replace them (see diagram below). and my X-Carve came with 9mm pulleys.

BUT are we saying that GT2 belt and GT3 belt will both fit on the stock pulleys of all X-Carves IF they are 6mm or less wide? I had the impression that GT3 required a change. Maybe I was just over reading what was being said and the pulley change was to accommodate the wider belt. Am I see this right now? 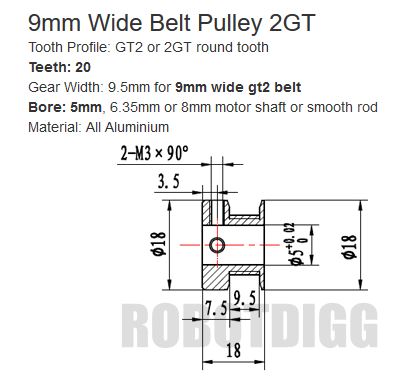 According to my understanding (I’ve never actually put it to the test) 2GT2 and 2GT3 belts can be used interchangeably because they are both 2mm pitch, and use the GT profile. They should both work on a 2GT pulley

I have put it to the test and it absolutely works. The 2GT3 belts are a little thicker due to the different construction but they work and I at least feel like they work better.

They just feel stronger too.

I think it is all starting to sink in but I have to say until this thread I was totally confused. Really appreciate the information. I have to say I was hesitant about starting a new thread about this because there are already so many about belts. But they all seem to assume everyone understand the basic belt differences/specs. I didn’t and couldn’t seem to sort it out. This sure helped me and I hope others in the future,

Thanks again! Now I just have to decide which way to go…