I’m a bit neurotic about getting this thing looking perfect before I even get a chance to power it up. (still awaiting backordered XController)

Chopped the DeWalt 611 cord and replaced it with a male IEC adapter. This will allow me to remove it and use it as a trim router when needed. Replaced the remaining cord with a 10’ long IEC cable in the tray.

Extended the cable tray so I wouldn’t have to zip-tie wires across the X Axis.(that zip-tie method looks terrible). I’d prefer to just hide them all. Got more cable track on order for the Y-Axis. 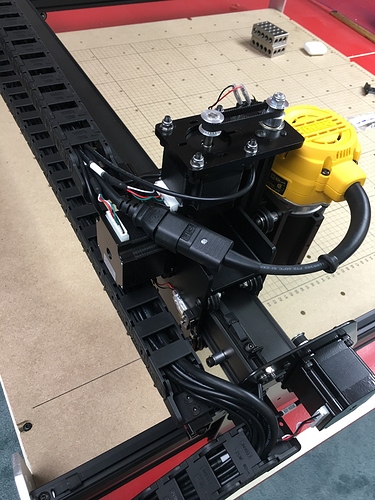 Where did you buy them from?

10’ IEC cable. Same gauge as the DeWalt OEM cord that came attached to the router. This one is nice and flexible just like the stock cable so it flexes very well through the cable tray. 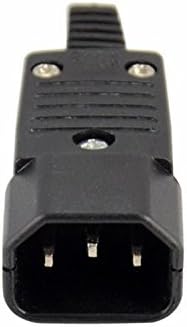 Just make sure you attach the white wire from the router to the ‘right’ side of the connector.

That’s not any different than the original spec outlined in the ‘assembly guide’, to run the power cord through the cable tray. Mine just has an adapter spliced in the middle. Not to worry though, I plan on wrapping it all in tin foil anyway. ;).

I’ll watch for noise, if I see any of that, I’ll change whatever’s needed.

Nope, it’s just bigger and has the snapover covers on each link so you can easily run cables through it without having to slip them through end-to-end.

I’m a bit neurotic about getting this thing looking perfect

Don’t forget that the primary purpose of an XCarve is to turn wood into (ideally) chips and (less ideally) dust, and then spray the results everywhere.

As a side effect, sometimes the wood that’s left over has a pleasing or useful form. But don’t kid yourself; the dust is what XCarves live for.

I also have my power cord running with all of the other wires in the chain and have had no problems so far.

I also have my AC router power wired in the drag chain and have not had any noise issues.

I was thinking of getting some of this Flexo Shield from Techflex to isolate the power cord then run it all in the drag chain. https://www.techflex.com/prod_fsn.asp.

Hi Traxxtar, how much extra drag chain did you have to purchase for the X axis and did you purchase it from Invemtables?

The kit comes with 2 sections of 18x25mm chain; about 22 links I think. I used both sections and all but 5 links for the X axis. I ordered another section from Inventables and will use almost all of that for the Y axis along the side of the machine rails. Looks MUCH better when the entire cable length is encased in drag chain vs having half of it all zip-tied to the rail behind the gantry.

Hwy hoping ylu can help me out. I landed up needing to order some parts from inventables and landed up getting the extra drag chain to extend it because I also hated the zip tied wires. I’m wondering what you did with the right side x axis motor wire? The one that was supposed to be zip tied on its own? I don’t think I can put it in the drag chain since it moves away from the cord. Here is a picture thst should hopefully help explain

+2 on running it through the makerslide 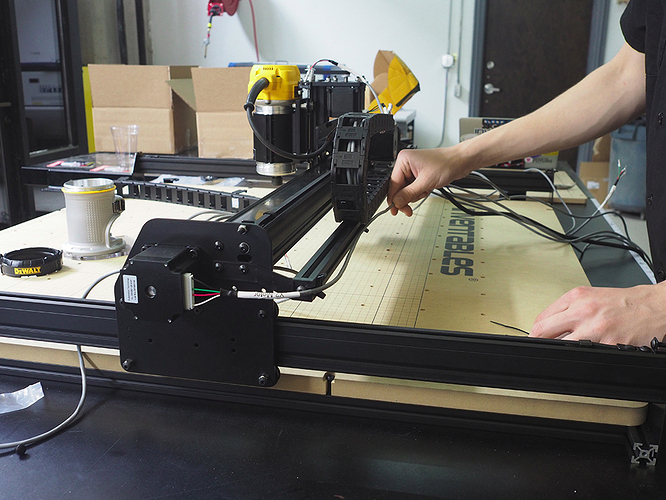 That pic above just looks horrible. ALL of my wires were carefully laid out and hidden as much as possible. I hate seeing those. When I received the XC, I thought that little hole in the side plates were created just so the wire could run through there, then I saw the assembly instructions and laughed. Really…zip tie it to the backside like that? Nope.