Hey folks. This is my favorite topic on this forum, so I’m starting a Wish List of things I want to build. In my world, it’s already time to start thinking about Halloween. A few years ago, I made an Iron Man armor from craft foam. Would be an interesting concept to try to cut something like that out with the XC.

Anyway, back to the subject at hand. Another thing on my list is Wolverine claws! Since several of you guys have successfully carved aluminum, I think this project is totally doable.

I’m working on creating an Easel file, but in the mean time, here’s what I’m starting with: 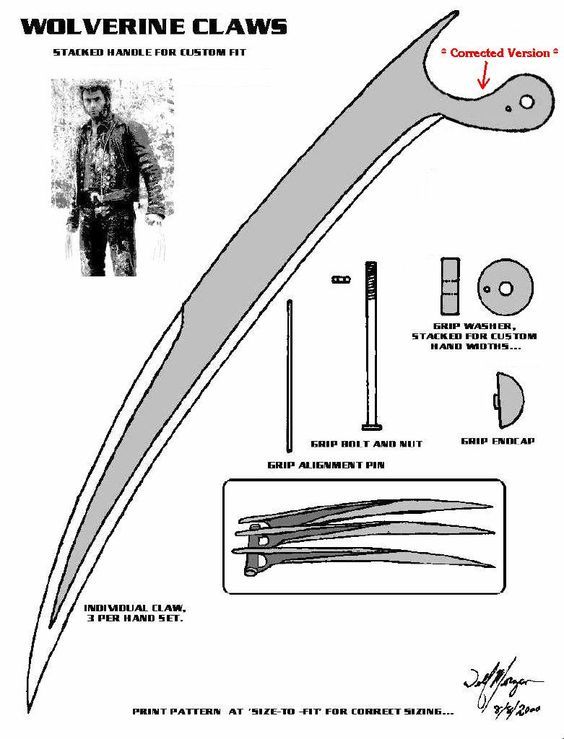 What happened to the Vectorizer app? It’s not in my library anymore. I’m having trouble with image trace. I can get the claw into Easel, but when I select Outside, it cuts both Inside and Outside. What am I doing wrong?

i’ll draw it up if you can scale it

I’ve not set up anything in this file other than import the svg. The edge of the blade is a separate shape, so set to zero if you don’t want to cut it.

EDIT. should be fixed

Dude, that’s awesome! How did you do that so quickly?

I’ve located the tabs so hopefully it’ll be easier to cut out. I left the edge treatment there but it’s only a few thousandths deep for reference when filing. You can set those to zero if you want.

This is pretty freaking cool!

because I am a cheapskate when it comes to materials…

the middle one would need the edge cut in a second stage to keep them all on the same side. I’d cut the edge on both sides anyways, so either way.

Yeah, on the prop forums, they take this stuff seriously. Different blade shapes/grinds for different movies, etc. I just want two legit sets for a quick and dirty costume if needed.

Nice job nesting them. I thought about that too. Well played, sir…