I have a bunch of CAD layer files I have created in Rhino 3D, which I’d like to send to illustrator as .DXF’s, so I can convert them there to .SVG files for Easel.

I’m having trouble with my line thickness settings in Illustrator. Because some of the lines denote inside carves, some outside, some fills, I’d like for all of my lines that I export from Illustrator to be paths with no line weight. Does anyone know how to do this?

Also, if there is a simpler workflow than the one I’m using, I’d love to hear your suggestions.

you can export from rhino straight to .ai format. From there you can easily make an svg if you want.

btw if you use rhino, you might want to look into rhinocam. I use it and I’m happy with it. But it’s not cheap although there are ways. Anyway it means no more exporting to ai, svg or easel, which takes quite a few steps out of the workflow.

I was worried about stroke thickness because when I previewed my file in Easel, the lines were huge thick blobs. I’ll try it again now with the preview upgrade and see how it looks.

I did look at Rhinocam, but I’m kinda overwhelmed with all the different apps needed to do what I want already (I’m trying to avoid learning Fusion 360 CAM which I also have). Thanks again for your input.

Would you have any idea why my object would get resized between Rhino/Illustrator/Easel? It imported great, and I was able to set all of my inside/outside cuts etc, but for some reason the whole thing has been scaled down by a few cm’s?

Here’s a link to the file, if that helps…

I have no experience with Easel. Never used it. I always made gcode elsewhere and used a freeware gcode sender before I switched to mach3

so sorry with easel issues I can’t help

When you export .ai from Rhino, a scale box should appear asking if you want to retain the scale or a snapshot. You want to keep the scale.

What are you units set to?

My units are set to mm “1.00 mm = 1.00 mm”, and the "Preserve mode; scale option is clicked. Is it some issue between Illustrator’s resolution being 72 dpi, and Easel not processing that info properly?

DPI should have no influence on the results, but you do want to make sure your units are consistent through the whole workflow. The issue you are describing is often cause by mismatched units.

Once you find the cause, you will be all set. I use Rhino->Illustrator->Easel almost every day and never have issues.

I export .ai straight from Rhino, save as .svg from Illustrator.

Fixed it! When using the save as SVG in Illustrator, under more options in the SVG save dialog, uncheck “responsive”. That was throwing off the file between Easel and Illustrator, making Easel scale it inappropriately.

So, for anyone with the same question, the workflow is this:

Export your Rhino .3Ds file as .AI.
Open in Illustrator (I change all the stroke widths to zero, but that’s just me), and export as .SVG. Uncheck SVG save dialog option “Responsive” box, and make sure all your paths are connected/closed and are vectors not pixels. 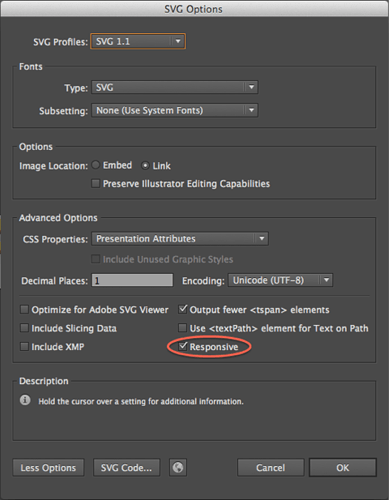 make sure you change your decimal places to 3 or 4.

What does that do? Mine is set to 1, and it seems to do the trick anyway.

That is the number of decimals places it will save a measurement. It will round to the nearest place. You want at least 3.

That makes good sense. I use metric, so maybe that’s why I haven’t noticed.

where are u from then?

I simply save the part as a svg file in rhino and open in easel, you will need to move each layer to a point to see what it is as you will have a lot of useless layers but the finished product is perfect.

Thank you so much! I just ran into this sizing issue myself, coming from Illustrator, and you all saved me a lot of headache.