I would like to know if the Hitachi M12VC 2-1/4-Horsepower Variable-Speed Router can be used on the x-carve.

I’ve got a feeling that it may be a bit heavy but I need someone with a bit more knowledge than myself to make that call.

The reason for asking is that I was planning on building the Joe 4x4 hybrid and this is the router that came with it.

All help will be greatly appreciated.

Do you know what the diameter of the body is if you take off the plastic handles? From the picture on Amazon it looks similar to the Dewalt 611 but they don’t give dimensions for the body.

I’ll measure it ASAP and let U know. But the weight is almost double of the Dewalt.

I know it is a variable speed router but will that have to be done manually or can it be set-up do be run by Easel. I think i’ve seen something like that on the forum but I am a newbie.

And may I say the forum updates, Ideas and the people like yourself behind the scenes are inspiring as hell.

Too heavy. Too large a diameter. Too powerful.

If you actually managed to engage the endmill for a full-power cut you’d bend the Makerslide.

Hi @EbenStrydom according to the Amazon listing the weight of this is actually less than the Dewalt 611 so in terms of weight I think you would be OK. We had the Dewalt running flawlessly at Inventables.

The diameter is 80mm and the mount we made for the 611 is 68mm so it wouldn’t fit inside for me to test it for you.

Would you be making your own mount?

@JoeMeyer You are correct I was looking at the DEWALT DWP611PK 1.25 HP Max Torque Variable Speed Compact Router Combo Kit with LED’s which is listed at 8lbs.

I already have a mount that came with the package when ordered. So drilling more holes to make it fit would not be a problem. It makes me a bit worried what @WillAdams is saying about it being to powerful.
My original plan was to build a Joe 4X4 Hybrid (http://www.joescnc.com/kitsplans.php), mainly because of the size but the amount of parts and all the soldering for the electronics just became to much.

I think the best is to save up, order the 1000 X-Carve, get it running and then I can start to fiddle with things.

In about +/- 6 Months U are going to send a package to South Africa.

Keep up the great work.

@EbenStrydom I’m a bit confused you can’t drill a hole to expand from 68mm to 80mm you would need a brand new bracket.

Regarding the power @WillAdams have you tried this model on your machine?

If not I was wondering if we could have a bracket made to test this one out. 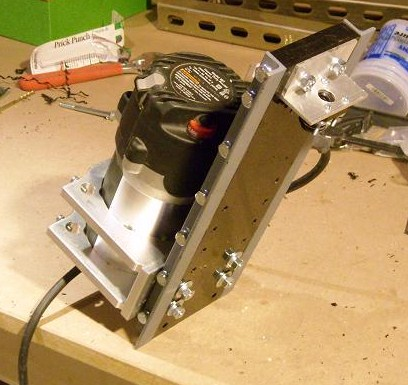 @Zach_Kaplan Sorry for any confusion. I have an aluminium bracket that was supplied with the router for the purpose to be used as the spindle for a cnc machine. What I meant, I could probably modify the mounting holes to fit on the Z-Axis of the X-carve.

Oh! Well that makes more sense. Where did you buy it? Did that come in the box from Amazon? Can I buy that bracket too?

@Zach_Kaplan It use to be sold on www.k2cnc.com

But I think the new bracket is sold here.
http://www.cncrouterparts.com/hitachi-m12vc-router-mount-p-156.html

Has anyone one given any thought to using a Rotozip for a spindle? I received my X-Carve in May but have been too busy with jobs to get it completed. I noticed the spindle looks a little wimpy. Maybe cause I’m used to seeing regular routers. I was thinking I have one of the original Rotozips that I’ve hardly ever used. It’s 120v 4a at 30000 rpms. How does this or the DeWalt 660 compare to the 300 watt 24vdc spindle.

A couple of people have used a Rotozip on a Shapeoko: http://www.shapeoko.com/wiki/index.php/Spindle_Options#100_to_999_Watts

If the spindle you would like to use has an over eating problem and weighs more than a standard gantry will handle you may want to look at doing this mod.
It is a major mod in that it will take making the parts on a milling machine and maybe a surface grinder.
I have attached a PDF of what the mod will look like.
The mod
sandwich a 5mm plate between the makerslides with dowel pins to locate the plate and 5mm bolts that clamp the whole thing together.
The spacer washers for the V wheels will need to be thinned to increase the gap between the MS to 5mm.
You will also need to shorten the bolt that hold the idler rollers and move the rollers closer to the carrage.

I have applied the mod similar to @DavidSohlstrom 's PDF. I have ordered a mount for the Hitachi (it was only $35 and I have the Hitachi sitting on a shelf). My 110v spindle seems to be working well but I sure do miss the power of the Hitachi. I also have custom low runout collets for the Hitachi so I can’t resist trying it out. If the mount actually arrives, I will try it out and report back. BTW - the z-axis has WAY more than enough power to hoist this thing with the acme lead screw.

Here is a link to the $35 mount: http://www.zenbotcnc.com/mounts/hitachi-m12vc

By upgrading to 110v spindle, would you be able to use the logic to run it or would it need to be a manual process?