Wow I feel so dumb

Been reading a lot of these topics. Feel so dumb. Looking up stuff like ugs and g code and other terminology. Still am dumb. Lol. New to this. Even though I do not know anything still love my x carve. Wish there were somewhere I could go to do hands on stuff or ask a pro or 2. For now have to depend on this forum, google, and youtube. Actually have 2 questions. Looked through the forum but can’t find the answers. If someone can point me to the right one or explain to me in simple English I would really appreciate it. First Everytime I am going to cut and it says to setup the router in the corner To raise and turn on spindle. How can I set it so it always has the same height to setup. Seems I always have to measure and am off on the cut. Either too deep or too shallow. Also I wanted to cut a logo. FOP logo to be exact. The outside I wanted a different depth than the inside small lettering. Tried to seperate in inkscape. Had problems. When I did couldn’t really align the two. Sorry for long post.

You are not dumb, just inexperienced.
There is a learning curve to these things and it’s steeper for some folks than it is for others. A hands on approach to learning works best for me, possibly you as well. Tinker with the machine, make some dust or chips, and be ready to break a few bits (wear your safety glasses) I used the cheap ones from amazon,then my wallet didn’t have cramps when things went SNAP!

In time operating the xcarve will become second nature

Phil is giving good advice, and there is alot more of it here within the forums.

I dont personally use Easel but setting z zero is a routine thing that is done each time you put a new work piece in the machine. unless you are running multiples of the same thing with the same dimensions, and placement in the work space.

Awesome… Thanx for the info. Definitely gotta start doing more stuff. Learn. Made a Couple plaques already. Gona post a pic if I figure out how. Lol 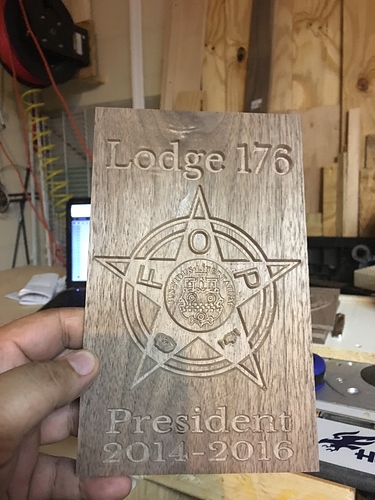 Made that for a guy in my lodge.

I was right! you aint dumb if you can do that!
Looks great!

Thanks. … still lost on g code and using other programs other than easel. Doing a lot of reading but I’m one of those people where I guess I’m visual and hands on. Thats the way I learn. Gotta find someone close to me who can teach me. Lol
thanks again.

Ok. I honestly don’t know what you mean by technique but I went to rockler which is about 45-60 minutes away. Spoke to a sales person for a bit and told him what I wanted to do. He sold me a set of bits. 2 of them were v bits. I can take a pic and send if you want. Also I downloaded the pic from Google then brought into inkscape. I really don’t know how I did it but managed to seperate the lettering in the circle. I then saved as a svg. I brought into easel. I printed all the outside first. Then took me like an hour to bring in the middle part and align it right. Was frustrating. The way I check to see if it’s aligned right is I put it to carve but higher where the bit doesn’t touch the wood. I use a pencil to mark it. I then stop and adjust accordingly until I feel it’s close to where I want it. Sucks cause sometimes I have to go through the whole cycle to mark where it ends. Takes longer but the only way I know how to do it. With depth I kinda wing it. Start at like 2mm and stop and go until I see it’s cutting about as deep as I want.

I used the same v bit. I guess I could’ve used the 1/8 bit that came with the machine to do the star cuts. Then used the v bit for the middle. Like I said. Super rookie . In kindergarten when it comes to cnc.

Yes. Took a long time. And yes I put the bit was .1. Have to keep practicing. Eventually will learn a little. It’s actually fun to create something and carve it out. When it comes out right. Lol. I’m using Inkscape. What program do you recommend to use to make pics into svg and to use with the xcarve?

Yep you’re definitely doing it the hard way but on the other hand you can’t argue with results… That looks pretty darn good.

Look into a program called “F Engrave”. It’s free and really neat. It has a bit of a learning curve but once you figure out you should be able to set up and carve that same piece very easily in just one or two hours.

Check out those videos. I would recommend trying some easy, symbol shapes on scrap pieces and once you get the hang of it try more complicated things like that lodge plaque.

Thank you sir. Definitely have looked into it. Looks so complicated. Will give it a try.

Speaking for guys who are even greener than you, I wanted mention that you’re helping others by asking these “dumb” questions, too.

When I first downloaded it I had no idea what I was doing. It really made no sense to me at first but then I played around and tried a few small things.

This page also explains a bit what each setting does. If you have any questions just ask and someone will be able to help.

Phil the info you have given me is great and I thank you very much. Was looking at another post you commented on about sizes. I ordered the bits and the collet you recommended. Just have another question and apologies if I’m asking too much. I can bring the png file into fengrave. I understand that. And understand the gcode. But am embarrassed to ask what is UGS?

Once you have the gcode generated you need a way to get it to the x carve. UGS is used to jog the big into position, zero it, and then send the gcode for the carve. Easel can also be used to send the gcode. I haven’t used it yet but others have said it works very well.

Use the nightly build of UGS v2.0, it is much more stable.