X and Y coordinates keep changing on me

I am finally able to get some success carving. However, some elements in my Easel file draw in the correct location, some elements either draw in the wrong X, or wrong Y coordinates. This will happen in the same Easel file. My artwork is created in Adobe Illustrator and imported as individual SVG elements (importing as a single file also had problems). In the latest example, X and Z were correct, but Y was off by 4.5". That particular element was grouped in Illustrator before exporting. But this also seemed to draw correctly a few minutes earlier. My artwork is pretty basic, no more than 6 pieces per component. This particular one had three shapes. I have had the Y coordinate be off in both the positive and negative direction in different files.

I first did a dry-run, and everything drew in the correct X, Y, and Z coordinates.

Guesses as to what could be the problem:

Y axis may have excess friction, the motors are working accurately, but seem to have more stress than the x axis (more vibration when moving)
Not all drivers and firmware is updated?
I’m using Safari browser on a Mac/Yosemite.

I’ve tried trouble-shooting but not having any luck. Any suggestions?

Check the v-wheel/eccentric nut tightness, you shouldn’t have any vibrations when moving. Also you will probably want to increase the y-axis voltage slightly on your grbl shield by gently turning the tan potentiometer 45 degrees or so clockwise.

Thanks for the suggestions. One v-wheel was a little too tight. When I disconnect the stepper motor wires, the carriage moves smoothly. After connecting, it’s still smooth if I roll it slowly, but it will catch/stutter if I move it too fast, this could be normal.

What is the effect of adjusting the potentiometer?

I think these are good adjustments, but the X, Y positioning errors I think are a different issue. The coordinates change between drawing different elements. The bit will be raised, moved to a new position, then draw that piece correctly, just in the wrong location.

The axis is more likely to slip when doing fast moves. Which is why it will often carve fine then slip when moving to the next element / layer.

Adjusting the potentiometer will increase the current sent to the steppers. If the current is too low the stepper will ‘slip’ and miss steps. There is a noticeable “clunk” when this happens though you will not be able to hear it over the nose of the spindle. Because the Y axis is two motors driven by the same circuit it requires more current so it is more prone to this error. Too much current can cause over heat problems, so just turn it up a bit and see if that helps.

Loose belts and too loose / too tight V wheels are also sources of axis slip.

If your motors are not being supplied enough voltage, then you can experience “drift”, where the machine will attempt to move “n” units on an axis, but will only move some percentage of that, which could be causing the “wrong location” problem you’re seeing. Can you post a picture of your failed carve?

still smooth if I roll it slowly, but it will catch/stutter if I move it too fast

This is the stepper motor acting as generators and feeding power back into the system (electromagnetic breaking).
You will see the green stepper driver LEDs flickering when this happens.
We all assume this is bad for the gShiled so when moving by hand be sure to move the axis slowly with the controller off.

Here is an example of things drawing in the wrong locaton. I stopped the job before it started drawing off the board. 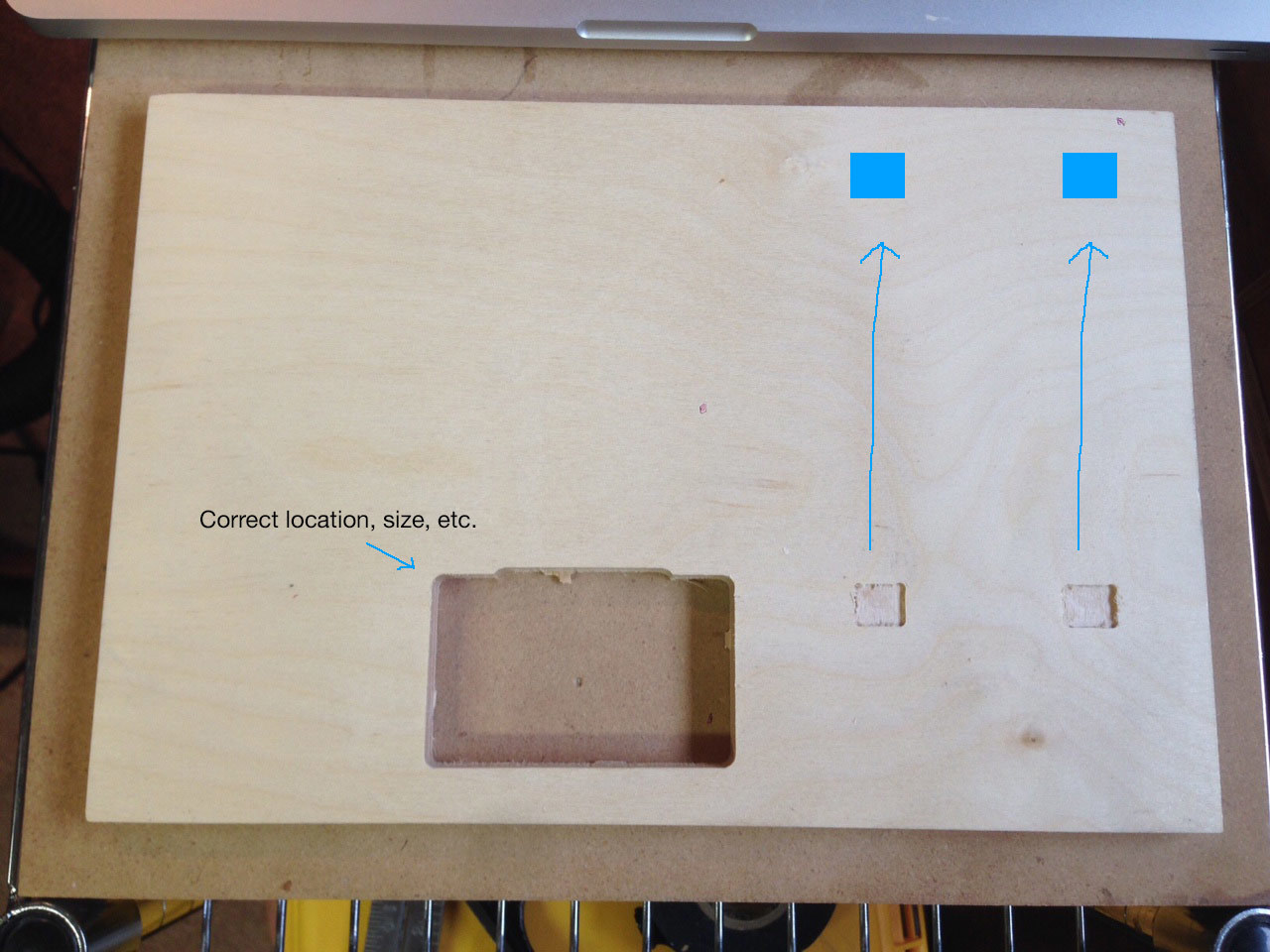 Hmm, that’s more significant than I would have expected if it was just the voltage being slightly off. When it’s running, do you notice it slipping or straining while moving in the Y direction? Also, if you have some time, could you try an “air run” (where you zero it an inch or so above the machine without a bit in the spindle, and the spindle not running), and see if it’s exhibiting the same behavior?

Thinkgs seem to be drawing in the right location, I did re-import the svg elements from Illustrator, but now Easel is breaking up a circle into four segments, that should be easy to fix.

Here is what my machine sounds like. When moving in just the X or just Y, it sounds smooth, but on arcs, it seems to have some strain.

Thanks Aaron and PJTX. My machine is running smoother, and files are running far more predictably. I don’t really know if there was one thing that fixed the alignment issues, but the potentiometer and v-wheel adjustment seemed to help.

For the SVG files I was exporting from Illustrator, I started over with new files, and used the SVG basic 1.1 export option.

Cool, glad to hear it. If you’re machine’s still pretty new, remember to check your belt tension in a week or so. I found that mine stretched a fair amount in the first week, then a tiny amount the second week, and have been fine after that.

Actually, I forgot to mention that I did adjust the y belt tension to match each other. I realized that’s one component that I’m not totally clear on. I re watched your belt assembly video http://x-carve-instructions.inventables.com/step06/. It would be great if you could add a small video showing more specifically what the tension should look and sound like. Or, even better, a way to measure it. I just read another forum topic “guitar tuning” that makes me think mine may be too tight. I try to match the y tension by listening for the same note when “strumming”. This note would be different based on where the x carriage is and whether it’s a 500 or 1000 rail. I guessed wrong on guitar tuning