X-axis makerslide not aligned with lines on wasteboard

On my X-Carve 1000, the X-axis makerslide is not well aligned to the lines on the wasteboard. To compensate for this, I now hold the X-Axis against the end brackets (both ends) with precision spacers when powering up. Once power is on, the spacers are removed and the Y-axis stepper motors should maintain the X-Y squareness. A photo of the spacer blocks and how they are positioned is attached.

Seems like this would be a common problem, but I haven’t seen it discussed here. Anyone else have a method for “tramming” in XY? 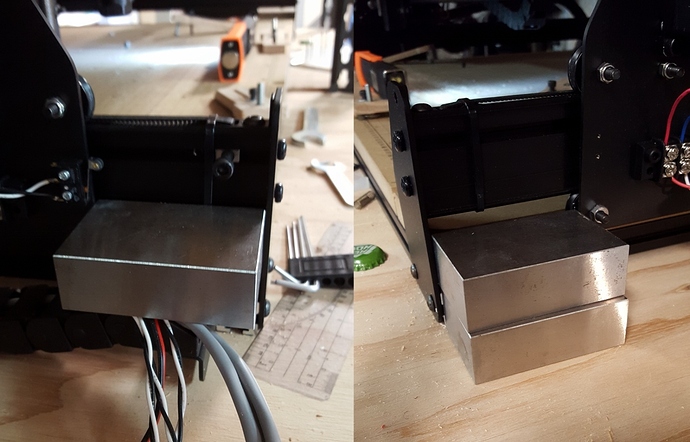 First, I can see on the picture, looks like one of your Maker slide screw is not all the way in. Second thought belt tensions must be same on both side to have even movement.

Good catch! I will tighten that screw, but that’s not the cause of this issue. The two Y-belts sound about the same when plucked. Tried to make make tensions the same on each side.

On your X-Carve, does the bit track lines on the wasteboard when moved end to end on the X-axis? On mine, the bit is about 1/4" off the line in Y when it gets to the far end of the X travel. At least it was before I used the spacers to lock both Y stepper motors to the same position at power on.

Honestly, I couldn’t square rails enough, ever. Some point I gave up, put four long pieces of wood as support beam around the rails, make sure it’s not going anywhere, put 60 degree V-Bit on it and run square on the waste board. That is my work space. After I get satisfied I surface level with 3/4" flat bit and add another 1/2" MDF on it, resurface again. Now all squared to me.

Even if the Y rails are perfectly square to eachother and to the wasteboard, the X rail can still be knocked out of square (with Y) just by bumping it when the power is off. Try it. Turn the power off, hold one end of the X rail fixed, and press on the other end of the X rail in the Y direction. The end of the X rail being pressed on will flex with surprisingly little force, leaving the Y stepper motors at different positions from one another.

It would be nice it the homing procedure matched the two Y motor positions somehow. Perhaps someone here has figured out how to do that.

Sorry if I’m being repetitive.

No, you’re not. If there is a problem, someone who is more careful about precision might answer this question. Just give it a little time then we can learn together.

Here in may be the problem. Because the standard machine runs a 3 axis stepper driver and you are running 2 stepper motors from one of the drivers for your Y axis. There is no way to put those stepper motors in sync with each another. So when you home or reference the machine it moves to the Y axis homing switch and says the Y axis is homed , but the gantry may still be out of square with the Y axis rails. If the Y axis rails are not an exact square but rather a parallelogram the belts for the Y axis will be off by the amount the rails are out of square.
The other thing that plays into this is because the wire distance to the 2 stepper motors are different they do not get the same timing for step and direction. It is a very small number but still different.

If you were running a 4 axis driver and slaving 2 axis together for your Y axis then both stepper motors will get the same step and direction timing. This of course means you have to run control software that will deal with 4 axis drivers and the ability to slave 2 drivers together.

What is the answer for the standard machine. I don’t know. Doing every thing you can to get the frame as square and parallel as possible. Having your belts as close to the same as possible and have your v wheel eccentrics all set to the same tension will help a ton.

Angus - Yes, I do use precision spacers to square the X-rail at power on. Seems to work.

I also sometimes intentionally slip one of the Y-motors a step or two after power on (by holding one Y-motor still and pushing carefully on the other Y-motor, can feel each step slip), to dial in X-rail squareness to the work-piece. That gets it really close.

I’ve been happy with my X-carve so far but I was only carving small pieces like 2" x 3" linoleum blocks. When I recently tried to carve a 5"W x 12"L sign for a friend I discovered that my X axis was misaligned with the lines on the wasteboard. So I read everthing I could find in the forums about the problem, made all the adjustments I could, and then found I still had the problem.

What I then discovered was that every time I pulled the X-axis rail against precision stops at the front of the machine, that the right side carriage rebounded just a bit along the right side Y rail. Apparently there was some sort of spring tension on the right Y-carriage that was causing that carriage to move a small amount in the +Y direction (and thereby put it out-of-sync with the left Y-carriage).

My first thought was that this was caused by a problem with belt tension. So I used the fishing gauge I had bought (as recommended by others in the forum) and made sure the belt tension was precisely the same on both belts. That didn’t fix the problem.

Then I simply released the belts on both Y rails so that there was no tension at all on them. Yet there was still that “rebound” tension on the right Y carriage. At that point I began to fear that I was just screwed thanks to some warp in one of the rails or plates that was creating the tension. But I kept investigating and realized that the tension had to be caused by something on the left-side of the machine. So I checked the X rail to see whether it was bent or warped in any way, tightened all the screws and still nothing.

So next I loosened all the v-wheels on the left Y-carriage and here I think I found the problem. My working theory for the moment (which I haven’t verified yet by trying a new cut) is that variations in the spacing between the v-wheels and the plate to which they are attached on the left Y carriage had caused the front of the left Y-carriage to be slightly misaligned (due to pressure) from the back of the left Y-carriage. And this slight misalignment here I believe is (due to the long lever arm of the X rail) the cause of the tension on, and thereby the rather larger misalignment of, the right Y-carriage. And this is why the X-carriage doesn’t track the lines on the wasteboard properly.

So I have now readjusted all the v-wheels on both left and right Y-carriages and I’m preparing to make a test cut on birch plywood to see if my theory is sound. But the question is, IF I’m right, how do I fix this permanently? What complicates this problem is that, as we all know, all the v-wheels, and particularly those held by the eccentric nuts, need to be adjusted rather finely to keep the carriages riding on the rails properly. So I suspect that making the adjustments to correct the X-Y alignment problem will cause other riding/tracking errors.

My thought is that using appropriately sized spacers between the v-wheels and the plates may prove to be a good solution. But I’d like to know what others think? @AlanDavis and @Zach_Kaplan?

I has a similar “rebounding issue” after my last upgrade. It turns out that my machine was not square causing the Y rails to not be properly parallel.

@AaronMatthews. What you did is where I started, that is, making sure that the Y-rails were perfectly parallel. I discovered the rebounding problem after I did that.

I do have an idea in mind for synchronizing the two Y-axis stepper motors to eliminate that as a source of misalignment and missed steps. Hope to have it figured out, working, and available as a shared project by the end of the year.

@PhilJohnson Already made the precision spacers and tried what you suggest. But it didn’t work because the tension on the X-axis rail would cause the machine to move away from aligned. The only fix to that is to find the source of the tension and remove it.

I do have the one-piece X-axis. And my machine is perfectly square and nothing is bent. As I tried to describe above, I believe the tension results from variations in spacing between the v-wheels and the plate on the left Y carriage.

Wish I could remember, or find, something in the forums that I saw some time back. It was a post about replacing the eccentric nuts with spacers of some kind. I suspect that might be related to, and possibly a fix for, the sort of problem I’m having.

Just wondering, if making your own wasteboard would it be “feasible” to either let the router carve a shallow grove to make the properly x/y orientation? Or even put a pen/marker on the mount?

making sure that the Y-rails were perfectly parallel

My rebounding problem was the Y rails not being perpendicular to the gantry, so one 1 end plate was farther “forward” than the other as far as the gantry was concerned. I had used a t square initially but somehow screwed it up. I found using the gantry itself to square things up eliminated my issue. (maybe I have a alignment issue with the gantry itself and by using it, the various misalignments cancel out?)