X-Axis Mising Steps (Yes Another One)

Hi everyone. I experienced an issue last night where I was running a facing operation on a piece of walnut and each time the machine came back to the right side to start the next cutting pass, it increased the distance of the start of the cut by about 1/8". I’ve successfully run two test pieces in pine that did not do this and those pieces came out great. One of those runs was right before I started my cuts in the walnut (I re-zeroed XYZ before starting).

I bought this machine only a couple months ago so it’s very new. I made sure to square the machine and set the homing switches, etc. before I even started my test pieces. I designed the piece in Fusion360 and adjusted the feeds/speeds for the material (pine vs. walnut) so don’t think I have an issue there.

I saw some other posts with folks that had similar issues and there was some discussion about voltage to the motors or potential overheating, etc. However, those were 4-5 year old posts with what I think were different controllers and stepper motors so not sure if any of that applies. I also have no idea how to adjust the voltage to the motors as that was not part of the setup for the machine when I put it together. Wouldn’t even know how to check it? My first thought is that my X-axis belt could be loose. It didn’t seem as tight as when i first setup the machine and it’s getting the most use so far. Just didn’t have time to adjust it last night as it was getting late.

Any help is appreciated!!

I also wanted to add, that the machine cut probably 7-8 passes before it started to miss the starting point.

Sounds like your losing steps. What is your Depth Per Pass and Speed?

I don’t see in your post that you calibrated the X, Y, & Z axis.
Did you do that?

For the walnut, the settings are:

Feedrate and speed were determined from an online calculator for the depth and stepover and seemed to be in the sweet spot for the RPM. I have the Pro version on my iPhone and used that since it had more detailed data for hardwood.

Not sure what you mean by calibrating them? That didn’t appear to be a step in the assembly instructions for the X-controller and the “Calibrate” section was mostly about setting the V wheels and squaring the Z axis, which I did both. I also squared the X/Y axis based on some other info I stumbled upon. It worked great.

Like I mentioned, it cut two test pieces great and several passes fine in the walnut then started overshooting the cut start point so I shut it down. About to go check the X axis belt tension and give it another go.

1/8" bit at 166 ipm at 0.15" deep is rather aggressive. Am surprised you are not breaking bits.
The general rule is depth of cut is 50% of the bit diameter.
Your step over is a little conservative but remember that first pass is full width of the bit in most cases.
I suggest you reduce both doc and feed rate by 50%.

I would imagine any decent calculator would factor in the physical limitations of a bit for the given cutting parameters? Just trying to understand the justification for using a depth of cut less than 50% of the bit diameter…maybe it’s just based on a limit of the ability of the X-Carve to push the bit through the material regardless of bit ability?

When carving in any HARD wood, I wouldn’t go deeper than .0625. At least not until you have run you machine for awhile. Remember the best Feed and Speed calculator is EXPERIENCE. Test some shapes in scrap wood. When done and your bit returns to zero, see if you’ve lost any steps. If you did lose steps, your too aggressive.
Remember, The X Carve is an entry level CNC machine. Take those Feed and Speed calculator as guides only. Test them first before diving into a nice work piece.

I would imagine any decent calculator would factor in the physical limitations of a bit for the given cutting parameters?

Most decent calculators assume a rigid machine (commercial grade) and any machine with lesser rigidity will have lower capacity.

That makes sense. Guess it will take some experimenting to see what an acceptable range is as far as the machines ability to push through a given material.

Last night I tightened the X axis belt and shortened the depth and increased the stepover. Don’t remember the exact values…I think it was something like 0.07 inch depth and 0.07 inch stepover with a modified feedrate. The machine no longer missed steps and maintained the path correctly. The finish was not what I was looking for so will need to adjust the stepover some to get a smoother look. My assumption at this point is that the belt system just couldn’t push through the material without missing. It may have even been stretching the belt which led to slipping and the eventual missteps.

I modified the Fusion360 toothpath last night to use the following settings which I’ll try tonight to see how it does: 16,000 rpm, 161 in/min feedrate, 0.03 inch depth, 0.03 inch stepover. That gives a 0.0034 inch chip load and hopefully a much smoother finish. This is with the same bit. Will take a run and report back how it did

On another note, while playing with variables in the feed/speed calculator I noticed the previous settings I was using were resulting in cutting forces greater than 5 lbs (according to the calculator) which seems like a lot. The settings above have a cutting force of 0.83 lbs so hopefully that won’t overload this machine.

Here’s the result this far. Bottom is silky smooth. Love it. The leading edge of the cut on the sides however shows tearout. In this photo it’s only at the bottom (last) cut since I guess it cut all the rest out on the edge each time it passed over u til it got to the bottom. I’m using the setting last mentioned above with climb cut method. This photo was taken from the back of the machine so from this perspective the bit was going right to left.

Any tips on eliminating this? Don’t want this showing up in my pocket if I can help it. 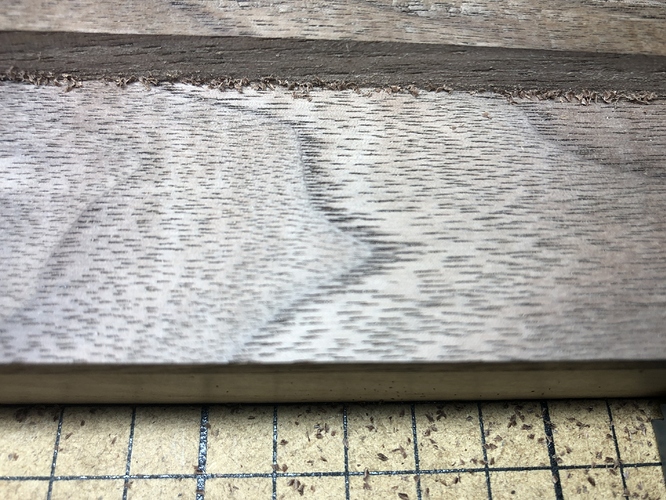 Here’s a quick vid showing the difference in cutting edge quality in climb vs conventional milling direction for this walnut piece. I expected climb to provide a better finish, but this looks like conventional does a better job. Is this to be expected for this material?