The V-Wheels on the X-axis keep loosening and I can’t seem to get them set to stay, even though I have followed instructions; open position, then turn to move Eccentric nuts till they are just to the point where the wheel won’t turn, but will just a bit, then tighten the bolts with the Allen key. Next thing I know the X-axis is skipping and stopping, and when I check the wheels they are starting to turn again

I added a little loc-tite around the eccentric nut itself, it seems to have worked fairly well. I still have to tweak it every once in a while, but it’s not a big issue.

Others around here have discussed replacing the M5 bolts with longer bolts and adding another nut past the eccentric nut, or using an eccentric spacer from the Shapeoko. I’m replacing my bolts with M5 hex head bolts that are the same size, but I’ve considered putting a locknut and a lockwasher onto the end nut end, and a lockwasher on the head end to really lock the eccentric nut in place relative to the bolt head.

I just finished tightening up 2 of the v-Wheels that were turning, and now the X-Axis won’t move freely. I can’t seem to get a happy medium and so it’s either too loose, and get’s a little off, or it’s too tight and barely moves. It’s constant tweeking with little results.

That’s why I am swapping to hex heads. I had to modify one of my allen wrenches to fit in the Z axis, and I’m afraid that either the wrench or the heads are going to strip out. It takes a bit of tweaking though, that’s normal.

You could try replacing the eccentric nuts with eccentric spacers and nyloc nuts.
That will take care of the wheels coming loose. 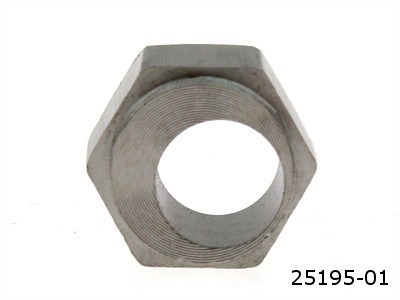 Has anyone tried turning the M5 bolt around? So the order would go from the outside-in: head of the bolt, then the eccentric nut, X-carriage, washer, v-wheel, then a lock nut.

The eccentric nut and the M5 bolt would be screwed and loctited together, and act as one piece. With the lock nut located on the inside it would be much easier to get at with a wrench to make an adjustment. Especially for those of us who have done the stiffening mod.

The description says:
Low Profile/Wide Head: A low profile spacer moves the carriage closer to the MakerSlide rail. This allows for a more compact design and can increase rigidity by placing the load closer to the support structure. There will be less space between the carriage and extrusion for belts and lead screws. This part also has features to allow it to work better with 3D printed and laser cut carriages. The wider head and longer boss makes the part less likely to dig in or bend in softer materials.

But I don’t see why it would change how the Vwheel is positioned.

I used low profile spacers as that’s what I had on hand (locally made). They look like 30277-01 but with a 5mm hole.
I did have to make an adjustment spanner as standard spanners were too thick to fit.

Well things went well adjusting the Eccentric nuts one the X-axis V Wheels tonight, and then doing test jogs worked well. I didn’t do test runs because I’m getting over the flu but this weekend will be a test weekend. After looking and the setup and thinking about the weight the Dealt 611 puts on the top front V-Wheels, and pulls at the bottom back V-Wheels it seems to make sense to 1. Loosen the eccentric nuts. 2. Tighten front Eccentric nuts of X-axis, 3. Tighten the Back Eccentric Nuts of X-axis. Seems to me that would distribute weight or pressure on V-Wheels by the router which would pull down on the front. Make Sense? Will see if this helps more.

I’m not sure how much of a difference it would make, but I’m interested to see what will happen. Make sure to let us know, please!

Yes. It does seem silly, but working in IT with Computers for 12 years makes you think of testing some odd things that surprisingly return results sometimes. We’ll see what happens

I agree with this method. I had noticed my old spindle (stock 300w) was a bit out of square, I readjusted my v-wheel in a similar manner and it seemed to do the trick! I’m upgrading to the Makita RT0700, so I’m sure I’ll be looking at this again soon.

Well I just don’t get it. I’ve gone through the whole loosening and tightening thing on the eccentric nuts for the X-axis countless times and test by jogging one time and it will work and then it skips. I loosen and tighten and jog test several times and its good. So I do a test carve, and 10% in it starts going off track and screws up the job. I think, is it not reading the gcode correct? But then when I test it by just jogging it things slip on occasion. Like I said I don’t know what to do. Any more ideas?

You might need to adjust your stepper
pots. Also check that your belt gears aren’t slipping on the stepper shaft.

I’m happy to report a successful test carve after a few adjustments; I checked and tightened the x axis belt gear (thanks Rusty) and I turned up the current a little more for the x axis, and I moved my wood 1 inch in on the x axis, zeroing an inch to the right because the far left seems a little tighter as the x axis travels there. Will tweak that when I need to. I hope to do a more complex carve tomorrow after checking things over, and we’ll see how that goes. Wow. Does it feel good to make some progress on this. Thanks for all the input from everyone

Your welcome! Glad to hear your making progress!

Here’s how I set up my eccentric-nutted V-wheels. I haven’t had to make a single adjustment to them since I’ve done this (almost 2 months ago!)

Basically I spun the eccentric nut down to the head of the bolt, then used a Nylock nut on the other end. So it would go:

The trick is to really crank down the nut against the bolt head. This locks the threads together and allows you to adjust it with an allen wrench. 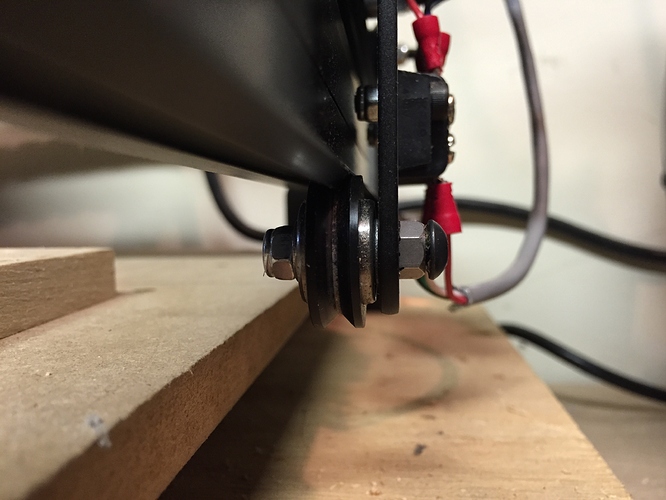 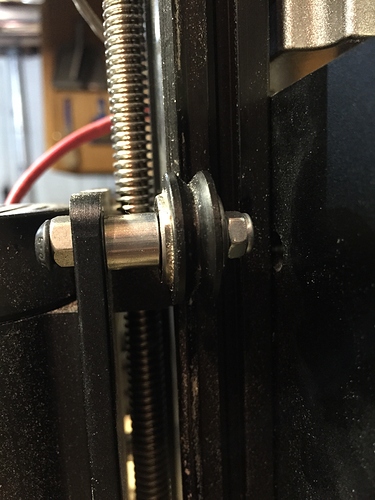 This has a bunch of advantages, notably that you gain much more precision with the position of the eccentric nut rotation. You loosen the nylock with a wrench, rotate the cap head to the right position, then tighten the nylock. Just like adjusting valve clearance or tappets in a car. It also made it much easier to work inside the spindle carriage. Trying to get an allen wrench in there was quite frustrating. It’s much easier to get a regular wrench in there though I’d recommend using a ratcheting wrench.

That is very clever solution.

How long are those M5 bolts? I like the idea, and ran across some 50mm M5’s at the hardware store today. They are hex head, which means I could use 2 wrenches instead of an allen key.

They are the standard bolts that came with the machine. Without going back in the instructions to see, or taking the machine apart to measure, I’m not sure. I believe all the gantry bolts were 25mm, but the Z axis ones were longer to accommodate the spacer.