I had noticed this not long after assembling my xcarve a little over a year ago but after checking everything I could think of I assumed it was due to the way I stiffened the X axis had caused it. It didn’t effect my work because very little of what I did was straight lines. I have just replaced the X axis with the new one piece design and I am getting the same problem. The only thing I can figure is that there is a bad v wheel in the X carriage. I have order all new wheels but wanted to see what everyone else thought while I was waiting. 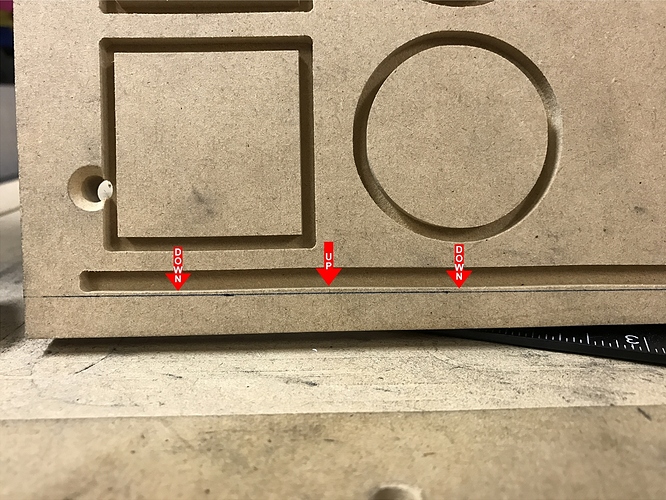 Stuart, whats the depth of cut, IPM and bit size you used for that cut?

Possibly belt tension on the low side? The circle also indicates the issue???

The belt tension was a little loose when I cut the circle but it was adjusted before the line was cut. It is also very consistent in the wobble. It’s hard to tell in the picture but the bottom of the square has the exact same wobble as the line below it.

I am not measuring the belt tension with a scale as many on here do. Still not sure what belt tension has to do with a wobble in the X axis.

I would check the lower Z and X gantry wheel tension. You should be able to barely turn the opposite wheel with your hands when tightening, Also check wheel play, there have been reports of the precision washer being too thin or mixed up with a normal washer during assembly. Put your bit in the low position and push it by hand back and forth, any play should show immediately.

I am ordering a scale today to measure the belt tension to rule that out.

I have just gone through every v wheel on the machine and they are all tight to the point that I can’t spin them with one finger but can barely spin them with two fingers. With the Z all the way down there is no play. I am going to try to set up my dial indicator on it later today so see what it says. The thing that makes me think its a bad wheel is that the wobble is very consistent.

I will try that this afternoon.

I would recommend moving the X and Y axis manual with the machine off. Looking for any “bump” in movement.
Then set up a cut file (say pocket cut a HUGE square) and air cut while just watching the machine. Just watching each wheel as it moves. You may be able to see the flex or bump happen and that will help you isolate the cause.

As it comes and goes it has to be something that bends and flexes back, you do not seem to miss any steps. What rpm do you use. Can you see the chips coming out in the rithm of the wobble, in that case the chips push the bit to one side untill the pressure is too big.

Have you tried cutting the same path going the other direction and observed the same wobble?

I’ve had wobble moving from right to left. Left to right is perfect for me.

I’ve not fully corrected my issue but I’ve improved it by tightening the X carriage V-wheels along with the Z axis V-wheels.

Also check the X axis rails to confirm they’re fastened snug at the ends. Mine was slightly loose.

I’ve had wobble moving from right to left. Left to right is perfect for me.

This difference is probably the difference in upcut or downcut where the cutting forces either makes the bit dig into the material or slide over it.

The belts all look fine. I will have new wheels here Monday so I will be checking all he hardware and holes when I replace them. I have tried watching the machine running but it such a small movement I can’t see it.

I noticed that to but it is there. I checked the slot it milled and it doesn’t vary more than .002 in width.

Have you tried cutting the same path going the other direction and observed the same wobble?

From past experience it doesn’t matter which direction it’s moving.

Was that a pocket slot where it moves slightly left and right and front and back to Mill that out? Or was it a single line multiple depths?

I set up a dial indicator this morning to see if I could see the movement on it. It’s not perfectly accurate but you can definitely see what it’s doing.

It seems that the wobble is a repeating movement. The avarage wheel diameter is 22mm which makes one turn 69mm, so if the movement happens approximately every 69mm you may look closely to your wheels.