I finished building my X-Carve yesterday. Everything went well, and I was able to complete setup and did a quick dry run with no bit. Later, when ready to do some real cutting, Easel could not find my machine. After lots of plugging/unplugging/restarting, it connected and worked great. I chalked it up to being a fluke.

Day 2, and I have yet to be able to connect for a second cut. I even tried a second computer, nothing changed.

When I turn on and plug in the X-carve, I get green lights on the gshield, and hear one click from the stepper motors. (The time where it worked, I believe there was two clicks with a pause in between). On Easel, the “Carve” button stays blue, not green.

I’m on Windows XP, and have a 1000mm machine. And am slowly losing my mind.

I attempted to follow the instructions for reflashing grbl to the Arduino, and was unable to clear the memory, the step before uploading the grbl file. 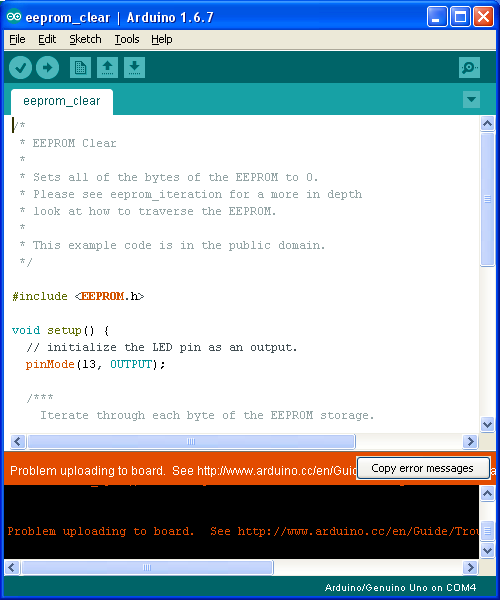 From the limited information here, it looks like the Arduino and grbl are probably working.

Also, it’s easy to overlook, but to reset things completely, you need to do all of the following:

Do you have a link to a powered usb hub? i found a cheap one at Walmart but I’m confused on how it would be used to connect computer with the arduino as its just a usb strip.

I don’t have any particular recommendation as I don’t use a hub with the X-carve.

USB hubs are just port expanders (lets you use more than one device on a single USB connection to your computer).

So, a powered hub would come with a power adapter which you plug into an AC outlet and a USB cable to hook to your computer on one end and the USB hub on the other. Then the remaining USB ports on the hub could be used to connect your X-carve to the hub with its USB cable.

I tried a powered USB hub this morning, and that did not fix the issue. If anything, it made things stranger. When plugged into the hub, I no longer saw the Arduino under the ports as COM4. Instead I now had a “unrecognized USB device” in the USB list.

I went back to the old way, following the reset steps listed by KellyHickel. Still not any success. I reinstalled the Arduino software, and at some random point of plug/unplug/reset, the X-Carve was recognized by Easel and I was able to run a homing sequence.

But on closing/opening the browser, it was again unable to find the X-Carve. (then I had to leave off and go to work).

Are you running straight XP, or do you have any of the service packs installed.

They got up to service pack 3.

I will double check tonight, but I believe that the laptop is fully up to date for XP.

Why would this adapter be needed? It isn’t described in the assembly instructions, and the jack on Arduino is covered up when installed, so you wouldn’t be able to connect it without modifying the enclosure.

I’m not denying it can be done, I just was surprised that the fix would be something that it seems like the majority of people aren’t doing.

Does providing power to the Arduino in that fashion conflict with the gshield board, or are they separate?

Ok, so if I wanted to add separate power for the Arduino, then all of the other wiring would remain the same? The main power supply voltage to the gshield is powering the stepper motors, and previously the Arduino was only receiving power via the USB, but now has a wall wart.

Sorry if these are simple concepts, I am very new to all this.

In the standard setup the Arduino and the logic circuits on the gShield are powered by the USB cable. The 24 volt power supply only supplies power for the blue LED on the gShield, the fan on the electronics controller, and the steppper motor voltage (and spindle if you have the original).

I personally don’t think that the power is the issue with connectivity problems, but rather that the USB implementation in a powered hub is maybe better than the implementation provided in computer ports. Pure speculation on my part.

You may have an added disadvantage by using Windows XP as USB came out after Windows XP, and therefore was an add on to the operating system and was a new technology at the time Windows XP was the current OS.

It may also have something to do with the USB implementation on the Arduino.

I really wish that I had the resources to track this down, however, I don’t.

Bottom line here is that we all just try to find an implementation that works and then stick with it.

You may have an added disadvantage by using Windows XP as USB came out after Windows XP, and therefore was an add on to the operating system and was a new technology at the time Windows XP was the current OS.

I have a USB on my Pentium 3 PC running Win98, so the USB have been around before WinXP. I use it to transfer large gcode files to my CNC machine with a USB thumbdrive.

Ok, my memory is not as good as it used to be, but the comment still applies. USB was not really native in Windows XP, certainly not in Win 98. You can add USB to any OS with the appropriate add on driver, even Win 3.1

USB was native on our P3 Win98 PC’s (we have 3 of them here still being used) and every WinXP we have ever owned has USB ports, which we still use many of those also.

This is really not that important, but you are missing the point. Just because the hardware that you are runing Windows 98 and Windows XP on have native USB ports on the motherboard doesn’t make USB support in the OS a built in feature.

The real point I was trying to make is that during that period USB technology was in development and many of the drivers in that era were somewhat lacking. Most of them were third party add-ons and depending on the expertise of the software developers you might get a good driver, or not.

The underlying support by Microsoft in later versions of the OS for USB made it much easier for even mediocre engineers to produce good USB drivers.

Enough said on my part - let’s see if we can get this person’s X-carve working for them.