X-Carve drifting and smashing itself into the wall?

Hello! I have recently setup my X-Carve in the past few months and attempted to run a job, however it drifts WAY off location to the point it begins to bash itself into the linear rail on the opposite side. Eventually after its done bashing the router into the side, it attempts to run the cut… Almost as if it thinks the object was placed far off into the distance and thinks it area is far larger than it actually is. This is not the first time this has occurred as it happened when I was attempting to run my first few jobs, but somehow magically fixed itself, then it started to do it again. I am running the latest Hex File on Easel via Chrome. This even occurs running the G-Code offline using Universal G-Code Sender. I am also using a genuine Arduino with a genuine GRBL shield.

The issue seems to occur regardless of the project. I checked the work area size and it is accurate. I also made sure I was placing the images within the work area inside Easel.

But maybe I am missing something

Do you have homing switches?

Eventually after its done bashing the router into the side, it attempts to run the cut…

I am most impressed that you actually let it carve after it played smash-em up derby with your rails. I would have been hitting the big red button 1/10th of second after it deviated from the carve outline…

How are you homing? Also is it going left into the rails or right?

I do not. I opted out of those however I am now getting the feeling I may want to invest in them.

Its hard watching your baby smash itself into the wall but it had to be done haha.

Not a bad idea actually.

Its going to right side. The axis are moving in the correct directions and it evens move back to zero if I stop it before it starts playing bumper cars. 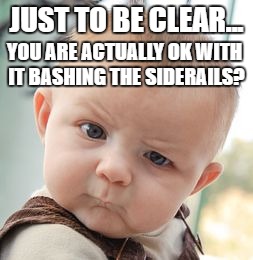 Where are you setting zero in relation to the right wall?

Are you using Easel? How are you setting your work zero?
Have you changed your steps/mm? Upgraded firmware? Messed with your microstepping?

Is your chassis grounded?

I am also using a genuine Arduino with a genuine GRBL shield.

Before anything else I would recalibrate the stepper current limit to match those of your motors.
The gshield require tuning to reach optimum current limit.

Yeah, linked project looks fine. Then the only reason it would want to go past the boundaries is if the machine lost steps. Being a gshield my prime suspect would be the current limiter set to low.

This video show the principle by measuring voltage between GND and Potmeter, multiply that with a scaling factor (not sure what it is for the Gshield) to calculate the current limit.

OP need first to test and verify his stepper current limit, under-limited the motors underperform, over-limited the driver will overheat and over-temp protection kicks in.
I think the main issue lies here.

I am also using a genuine Arduino with a genuine GRBL shield.

GRBL-shield with individual drivers. Either not driving the motors as hard as they could or overheating because of the limited, real-life, current handling capabilities

I think your steps/mm are wrong or don’t match the microstepping setup on the Gshield.