I am new to CNCing first of all so this may be a silly issue that I’'m just not seeing.

I’m doing all my CAD and CAM work in fusion360 and then exporting the g-code into easel for now.

Everything on my CAM simulation looks fine, and when I run the digital run-through on easel it looks fine. But when I cut my part something isn’t working correctly.

The part I’m cutting is basically an odd sized box. So it has an outside perimeter cut and then an interior cavity. the outside wall needs to be a particular dimension. When I go to cut through, one side of the wall is super thick and the other side of thins to nothing and the router bit actually just blows right through it. As if the interior cavity is on center but the exterior perimeter cut is off center. 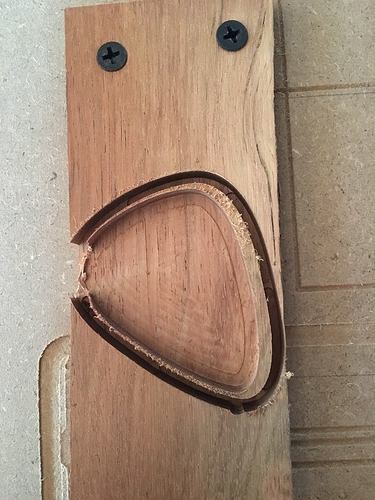 If the simulation looks good and the result dont match you either have a post processor / work zero issue or something mechanical is going on.

Are you changing the tool between the profile and the pocket cuts?

Also it is usually better to cut the interior pocket first and then cut the exterior profile. The wood can move around more than you think after you cut the profile,

The interior is being cut first. The exterior is the last path being executed. No tool change.

Is your profile cut set to cut on the outside of the vector?

When I zoom in, it appears your Z axis is moving around more than expected. I can see where it was deeper in some portion of the same pass. Are the belts and pulleys tight on the Z axis. Check your set screws to be sure they are nice and tight in the pulley. It is a good idea to draw a line across the top of the shaft and onto the pulley so you can quickly see if it slips.

It looks like one axis jumped teeth on the belt causing it’s X or Y to get out of alignment. I’d check the tension on them. I should really learn how to do this correctly myself, I just tightened them until they make a nice tone when snapped.

Also, have you properly adjusted your v-wheels and squared the z-axis? I just got my x-carve up and running this weekend and missed these steps which resulted in rougher cuts that look a lot like this. I was very disappointed until I realized I hadn’t even tuned up my machine.

how did you “tune up” the machine? I couldn’t find any advice on that before. I will try that before getting into any more invasive things.

Square the Z a axis to the waste board. Adjust each v-wheel until it and it’s paired wheel have decent friction on the track when turned by hand. Tighten belts until they twang when plucked.

Also I would go through and check every single bolt in the gantry for tightness just for good measure.

Keep in mind, I’m new to my xcarve as well, so still do some of your own research.

Also, check the Calibration page in the build instructions. It has info on most of this.

Maybe you plunged too deep and lost steps on the profile?
Can you share the Fusion file?

I think you are correct. I haven’t had time to get back to this problem yet but the last time I was trying to figure it out I noticed one of my Z-axis bearings was rolling freely. So clearly isn’t tight up against the rail. Thanks for your response.