So, it has been at least four weeks since I took apart my x-carve for upgrades. Now it is done, and it works!

First, I replaced the wasteboard with 250mm Misum t-slot extrusions, and bolted those down to 20x20 extrusions. Then I mounted the end plates on the Y rails to the edge of the Misumi extrusions instead of the original 20x20s. The end result is that it is a lot easier to get the frame square, and I get an extra 15mm or so of clearance, which cloud be handy if I want to put a vise on the bed. So far I have been using step clamps with the slots, and this works really well.

Next I pulled all of the original wiring and started over from scratch. I replaced all of my original cheap crimp lugs with nice shrink wrap, high quality lugs. I ran both y lines all the way to the controller, and replaced the limit cables with shielded cable. I stopped using any nylon braid in the drag chains, as there was just no room. As it was there was just enough room in the chain for the four stepper cables, and two shielded cables carrying the limit signals.

I screwed down all of the electronics onto a piece of plywood with terminal blocks for all the connections. This way the cables from the machine attach to the strong screw connections, and from there connect to the Arduino and G Shield. So we don’t have a lot of strain on the delicate PCB connections. Also as both Y motors are wired to the blocks, I had to do the cross over by adding some extra wires connecting the connections for each Y motor.

The limit switches are now normally closed, so they should stick on if the connector is removed or something. The wires for the switches are now in shielded cables, so hopefully I won’t have a problem with interference. All I need to do to support this config was set $5 to 1. The internal pullups on the pins are still active, so it works fine. I tested the switches and they work fine.

I also added a 24-12 DC converter so I could use the Spindle power from the PSU to power the cooling system for the VFD spindle. All this can now go on a shelf under the x carve because I added about 6 feet of slack. Although rotating the X Carve so the Y drag chain is on the back not the side makes the configuration work a lot better.

Finally, I add the 110V 800W water cooled spindle. This is pretty standard, using the 611 mount with some styrene to shim the spindle. The cooling was done with an all in one cooling system from Thermaltake that provides reservoir, pump, and radiator. It was designed to go in a PC, so I had to add some legs to make the airflow work, and it needed 12V DC power.

I am using the pot on the front panel of the VFD for speed control. Everything is running through a GFI outlet and heavy duty switch I installed on the workbench, so I can power everything down with one quick switch throw. I was planning on adding a digital current meter so I could watch the current draw at the same time the VFD display is showing RPM.

The spindle is really quiet when it isn’t cutting, even at full RPM. It is so quiet you will not notice it is on. This is actually dangerous, as I started unclamping a piece while the spindle was still running. I ended up buzzing my fingernail. (Scary, could have been a lot worse). So I have to make sure to check the VFD panel, or just shut down the whole system before putting my hands in there.

Here is a video of the updated machine making its first cut. I used F-Engrave to generate the G-Code, and

Sounds like you put a lot of work into your system! Very impressive! I wonder how hard it would be to wire in an LED in line with your spindle so you had a more visible indicator that it was running. I just watched the video and it was crazy quiet. Nice work!

Also finished the voltage/current meter for the whole setup. The new spindle makes quick work of Acrylic. I actually turned the RPM down to about 14000 so I wouldn’t melt the acrylic.

The readings from the meter are interesting. If you start the motor right after turning on the drive, it will report something like 8 or 12 Amps, and shut down with an over current protect. The current meter that is measurig the current for everything, (drive, gshield PSU, cooling), is only showing .4 Amp. If you let the drive warm up a bit, it works fine, but it still over reports the current, but more like .8 Amp while the meter show .6. I don’t think the little current meter is off by that much. I figure it is probably around +/- 10%. 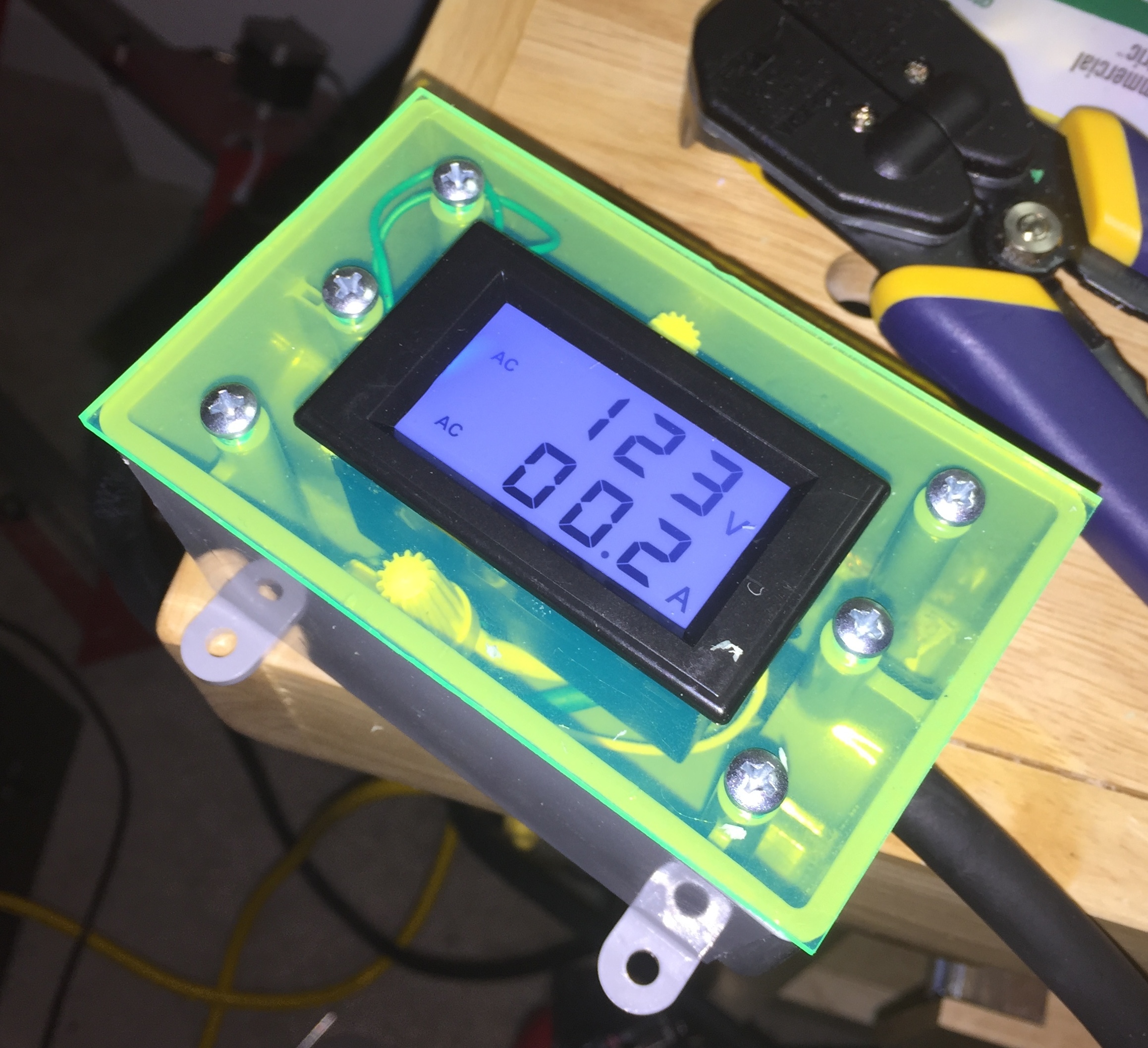 Nice work, looks great! Good idea bolting the rails to the aluminum bed directly, much sturdier. I’m curious to see how fast you can cut aluminum with that setup.