I do not believe that my X-Carve Pro 4x4 is homing properly. These numbers in the following screenshot do not seem correct to me. I have researched this extensively and have come to the conclusion (right or wrong) that my XY zero points are set correctly at 1219.200 as verified in Machine Inspector. When I home the machine, none of the homing switches light up. I have to manually jog the machine left, forward, and up to activate the switches. I have verified that my Y1/Y2, X, Z cables are plugged in properly.
Does anyone have any suggestion on how to recalibrate or solve this issue? 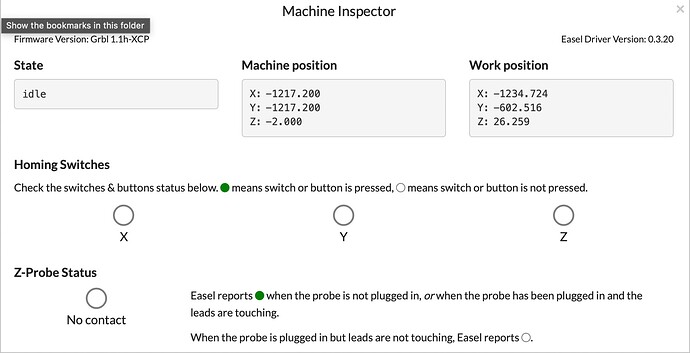 After manually forcing the machine home, here is what I get. 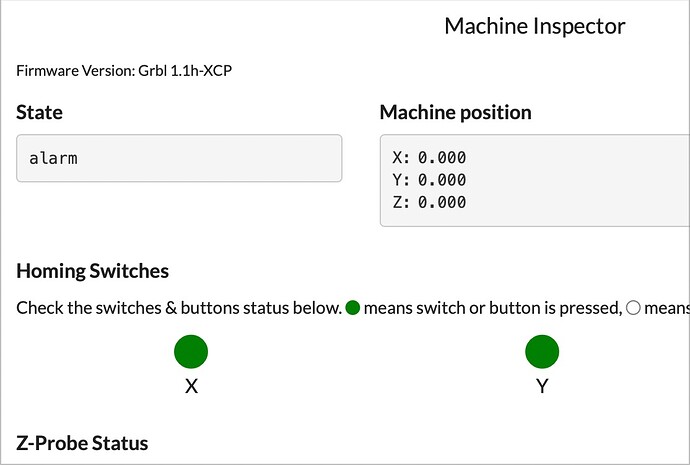 Thx in advance for any assistance…Greg

Does it move at all when you try to home?
Can you scroll down a bit more in machine inspector and share the rest of your grbl settings?

Thx, will do that a little later this afternoon!

Here are the current machine settings (checked and verified twice).

I have also been told by Inventables tech support they should be correct.

As seen in this screenshot my home position is not 0, 0, 0 as I would expect. Tech support also told me that these numbers are correct. Just curious if the community also agrees that they are correct.

grbl looks good, I was afraid that the one for homing might have been turned off.

IT really looks to me like the machine was in the front left when you powered on, then it homed to the rear right, and then you manually jogged it to the front left again… or something weird like that having to do with homing the wrong direction or moving in the opposite directions…

EDIT: One more thing, when you do try to home, what is the Alarm/error number showing? you first screenshot showed Alarm status. Is it alarm #9?

IF It is Alarm 9, then it makes more sense… and your machine has moved MORE than the allowed distances (1217.2mm) in both X and Y without triggering the limit switch)
Most Likely, either they are out of place and not being pressed, or they are defective, or defective wiring (press by hand and see if that screen turns green if it doesn’t then ?)

Seth,
1. Yes, front left corner.
2. Yes, correct direction. No re-wiring necessary.
It has been about three weeks since setup. I do think it was front left when powered up the first time. I do not recall if it homed to the rear first. It seemed ok to me but I was a complete newb then and now. I have learned a lot the last few weeks but have a long ways to go.

I will have to try to recreate the alarm as I have not seen/noticed it since changing $1=0 to $1=255.
I also think it is moving to far as it seems to growl a little louder than I think it should.

I have tried to recreate the alarm and so far I cannot.

Screenshot after homing. No switches are active.

Screenshot after another 100mm move x left, y forward/front, z up. Switches activate and bump the hard stops on all three axis.

Ok, i think you’ve confirmed enough to indicate that in most likelihood the config.h (home config) is not setup to zero out after homing. (Likely it was corrupt when initially loaded) What would need to be done is flash a fresh version of the grbl V1.1h to the cnc controller. which requires using the Arduino IDE software.
AFTER modifying the default config.h file

Inventables support can do this via remote login. I would call and tell them what happens and (you can include this conversation if you like, but it probably doesn’t really mean much to their process) They can have you give them remote access and do the grbl flash with you right there…

This line should have been omitted from your grbl config.h file, but apparently was not 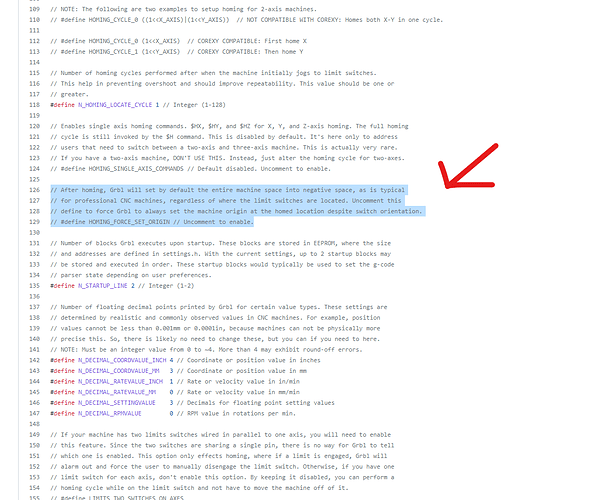 ORRR flash the firmware yourself in Easel…I was looking for this when iI typed that prior part out about getting support to do it for you… but found it after… here’s how:

@SethCNC
Wow, sounds complicated, I am glad that Inventables should be able remotely fix this. A few weeks ago I talked with tech support (about another issue) and he hinted that a firmware update maybe needed.

I just saw your next reply as I was typing. I will read and probably give it a go.

Thanks for all your effort and help!..Greg

@SethCNC So Easel will automatically push/upload a fresh copy of the firmware to the controller without having to edit any of the lines of code you mentioned previously?
Thx…Greg

I presume so, or they wouldn’t have it labeled for the XCP and only assessable when using a XCP profile… It should be setup 100% correctly for the XCP which requires that homing config file is setup right

Hi Greg,
The values reported are correct, Easel is just displaying what we request from GRBL. If you’re still having issues with your homing, please reach out to help@inventables.com for more support.