My X-carve spindle has started acting weird on me. Checked with Inventables and Sam told me it was probably my spindle as they have had an inherent problem with the 300W spindle. It has been corrected but the new spindle will not be in for several more weeks. She suggested I go with the DeWalt 611 router instead as they have a mount just for that unit. The only problem I see is DeWalt doesn’t seem to have a 1/8" collet for that machine and all of my router bits are 1/8" shank. Does anyone know where I can acquire a 1/8" collet for the DeWalt 611 router? If you use this router are you using the 1/8" bits from Inventables or have you purchased 1/4" shank bits?

You can order collets here for the 611

Also cheaper adapter which I’m using with no problems is;

Thanks guys for the info. I ordered the 611 router from Amazon and a 1/8" collet from the place Allen recommended. FYI, Inventables is refunding me the price of the spindle and is also sending me the router mounting plate for the 611. You just can’t complain about these folks as far as customer service goes.

I have the 611 and the mount all ready to install, I am just waiting on the 4 and 6 mm collets to arrive before I switch the stock spindle out.

My 300w spindle is still sorta working, but the bearing is almost shot and the runout is increasing daily. It is making some very scary sounds when it is running. I expect it to fail completely pretty soon, so I hope my collets arrive before that happens.

I did not think to ask Inventables for the new mount or spindle refund, I just assumed the 300w spindle had a very limited life expectancy.

I initiated the contact with Inventables and they informed me of the problem with the spindle and offered the refund and offered the new mount as well. Guess they just like old people?

Allen, how did you power your 611? Do you just use the ac cord provided and plug it in or did you hook it in through the X-Carve some way?
James

I have not connected it yet, but I plan to just attached the 611’s AC power cable to the outside of the drag chain with zip ties and then plug the 611 into the AC outlet I have wired into my emergency stop switch.

So all the power supply is going to do is power the controller and motors.

I hooked mine up with a solid state relay so the controller can turn the router on and off.

Will the low voltage logic from the Grbl drive the relay?

you can use the 24v spindle out to drive the relay.

If you get the right relay it will.
Inventible’s will work fine.
The one I used can be controlled by 3-32V DC and will switch 24-380V AC and it works fine. I actual wired the relay to control a outlet so It switches on both the router and a shop vac.

It won’t do speed control so I always leave RPM at max in the software and just set it manual on the 611.

I have the 24v driving a relay and then going to an outlet so I didn’t have to cut the Dewalt power cord. 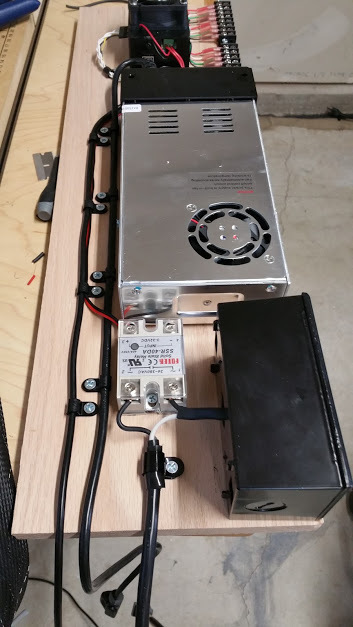 Did someone said OLD. I’m 60 years young. When you start using that word, it sticks on you James.

Dallas, can you provide more photo’s so I can get a better idea of your layout?