Zach sent me this “cool” thermal image of an X-Carve. I was not there, but I heard this was about 40 minutes into a job. I think it interesting to see a little heat in the cut. 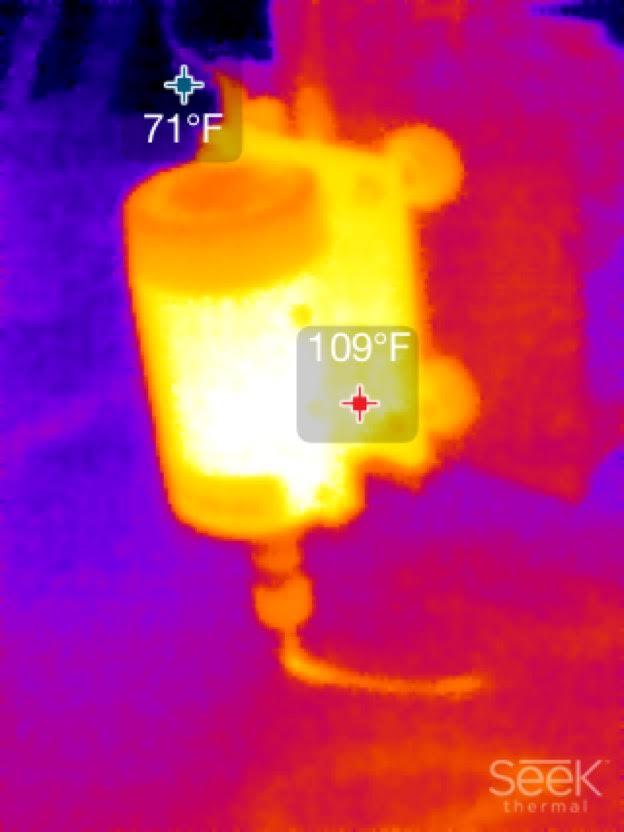 Awesome. I think it also would’ve been cool to see the heat and heat dissipation on an aluminum cut.

thats interesting. what is the operating temp recommendations? should cooling solutions be sought?

That is a self cooling motor and is running well below its limits. There is no need to do additional cooling. Just do not block the top or bottom of the motor.

A 109*F surface temp is actually quite a bit lower than I would have expected for a motor running full-tilt like that. Seems as though whatever internal cooling system the motor has is doing a pretty good job.

edit: and Bart beat me to the punch.

edited edit: @BartDring, is that a/the machine being demo’d at Maker Faire?

I sent this to Zach the other day while cutting some Baltic Birch plywood as a test for something I’m going to be cutting in aluminum. I’ll send the thermal images once I get that going. I need to get a dust shoe on the machine before that though.

Notice the Y axis stepper cable is hotter than the others (not by much and just “hotter” not hot ^^)
Sorry for the bad framing, shaking and bluriness, it’s all manual focus and it gets touchy at close range, and I didn’t expect to share it.

You can see how big of an issue emissivity is with these thermal cameras. The X-Carve logo looks massively different than the extrusion it is mounted too.

Can you tell us more about the camera and how it is used? I did a little research on the Seek camaera.

I use a [Thermapp][1] for android and I usually ignore anything remotely reflective when looking at temps, or I just spray them black if I really need to, I haven’t tried spraying an endmill yet ^^ .

The camera itself has manual focus with swappable germanium lenses, it has a 384x288px sensor (non-interpolated ^^), it’s made out of machined aluminium and can clamp on an android smartphone/tablet and/or mount to a standard tripod, it uses USB OTG to communicate with android.
There is an official app for it which has most of the features you expect from that kind of camera, measurement, still capture, video (9fps soft limit for legal reasons).
An SDK is also available to access the hardware from a custom android app.
[1]: http://therm-app.com/

I usually use it to debug circuits but it has a lot of “I wonder what that looks like in thermal?” potential so anything goes in the end. (3D printers are fun to look at amongst others)

Do you know how it compares to the Seek Camera

Edit: Looks like the forum acted up and chewed everything I typed and just went with what I had typed half an hour ago… fantastic. And I can’t recover it because it’s “fancy dynamic JS” with the S not standing for script…

Thermapp is pricier, heavier and larger, it has better resolution and looks to be more sensitive with less noise (almost no filtering of it in camera as well), the rated temp range of the TA seems conservative compared to what I’ve seen, I hypothesised that it was the range within which the readings are accurate to a certain degree, the Seek is rated with a much wider range but I can’t tell how it relates in terms of accuracy. The TA doesn’t use a shutter so doesn’t lockup like the Seek, it has a tripod mounting hole, it can be operated from as far as 1.5m using a longer cable (didn’t test further) I guess the Seek can be used that way as well.
The lens is removable and focusable, it’s possible to get close enough to see a 4cm wide area sharply with the stock lens (13mm), I probably didn’t mention or forgot a LOT but I’m a little disheartened by the loss of a perfectly good post.

Oh and Thermapp has a free SDK which pretty much means you can do whatever with it (raw capture, non-linear gradients, overlays etc…)

The ThermApp does look like a pretty sweet piece of kit. I’m kinda surprised they don’t have a fixed focus lens on it, or at least an option for one. I have a FLIR E4 that has some slight aftermarket stuff done to it. It takes pretty nice pictures, and seems to have a wider temp range than the ThermApp. It does have the calibration shutter, since it is a thermography device, and regularly calibrating the meter tends to prevent measurement creep.
It can also be used as a webcam in UVC mode, which I’ll end up doing tomorrow for my next batch of cuts. 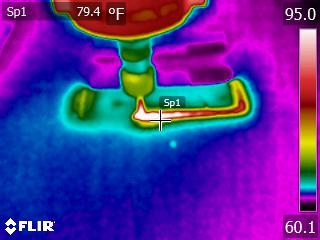