According to care support I have a problem with my controller, but I don’t think that’s the case as everything works fine in easel.

What post processor are you using? Perhaps your G-Code is incorrect for the Grbl version you’re using.

I’m no expert by any means, but I would try this common sense step. Type anyone of the Z up and down Z axis commands into the UGS command box and run it, if it doesn’t move it then it’s most likely the wrong G-Code if your motor is working in Easel.

We have discussed this a few times. Your machine is fine, If you watch the belt on your z motor you will see it moving like crazy while it is doing the photo. The problem is that it is only moving a millimeter or less up and down due to the bit you are using. If you use a vbit with less taper (like a 30 degree) you will get more Z movement. (meaning the bit will carve deeper)

Get a 30 deg bit, you will see a difference.

Here is a video I just shot. Not much has changed, I received my 1.1 mm bits today and had to try one. You see the results!

If you want to carve photos, why aren’t you using PhotoVcarve? It’s designed for that purpose. It processes the photo differently. A friend on another forum uses it and likes the results.

Again, if while you are carving use your camera to video the top of the Z axis focus on the belt lets see if it is moving I bet it is. You said you told the program to carve a shallow cut and it looks like it did just what you asked.

I go over AllenMassey’s all posts about Photo Carve. It is very clear. The key points are Vbit 60 degrees, either start carving on painted surface or spray/stain after carving. Light sand, when you satisfied on picture look, put very thin shellac on it, you’re done. It is not machine, it is the method carving and finishing.

That’s what I am using!

I just competed a test with that demo photo and the 30 deg bit, I will post the full video in a bit but here is what it looked like after a bit of stain 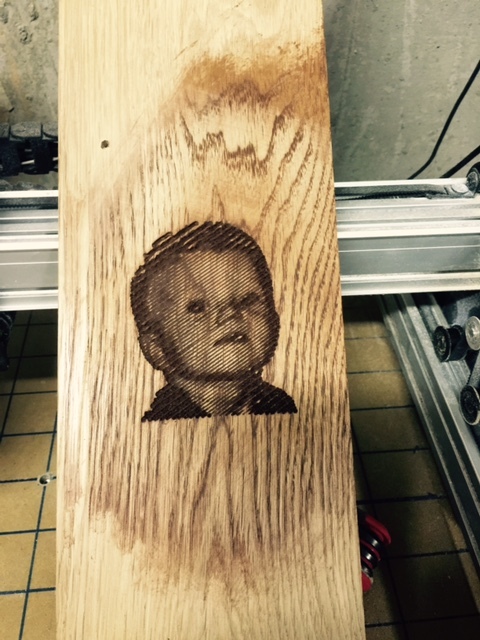 I had a 30 Degree Vbit loaded in the Collet. You say you used a 30 Degree bit above, but in your video you say you are using a 1.1 mm ball nose. That is not the same thing

Before I could send the gcode to the Xcarve I had to send the G20 command to put the Grbl in inch mode. You must do this, since Photovcarve is not setting any units in the TAP file for some reason.

I start off showing it being carved (I show how the Z drive belt is moving), then what it looks like after a light sanding and a bit of stain. Then a few pictures of it

I used Photovcarve free trial with the demo picture of the small child.

Here are the cutting parameters I used

If you use the same bit and the same cutting parameters your machine will do the same exact thing.

That’s what I’m talking about. It is not science project, it is the method. I think he is trying to see picture on the wood immidiately after finish carving. In my opinion, I wouldn’t even try. Why should I stress my equipment for half tone picture. Thanks Allen. You made it crystal clear.

Allen Massey, I see your ‘z’ axis moving very well, maybe I have been just cutting at too shallow of a depth? I will try tomorrow setting mine at .1 inch like yours and see the outcome. That’s the only difference I can see at the moment. I will also use my 1.1mm end mill as I don’t have a 30 degree v bit as yet, they are on order! Thanks again, will let you know the outcome.

Before I could send the gcode to the Xcarve I had to send the G20 command to put the Grbl in inch mode. You must do this, since Photovcarve is not setting any units in the TAP file for some reason.

When I bought V-Carve, I modified the Gcode-inch post processor to include the G20 and other commands I wanted to include in the header and footer, renamed it and placed it in the My_PostP folder so it’s the only post processor that shows when I’m ready to save a toolpath.

If you set the startup block to $N0=G20 and the grbl setting $13=1, then it does not need the G20 in the file. It will set grbl to inches every time connecting to the com port. At least that’s how it works when using PicSender.

Allen, as I’ve said, my 30 degree V bits are on order, in the mean time I tried carving with my end mill bits using your .1 carving depth, all it did was break two of my bits. So no more of that until the 30 degree v bits arrive and then I will try again. Yes my ‘z’ axis was moving as you said.

James, I understand your frustration. I spend about 80% of my time being frustrated by how much I don’t understand or cannot figure out how to do. CNC work is new to a lot of us here and it sometimes takes a few failures to figure out what is happening.

I understood that you had ordered a 30 deg bit, I was just trying to save you some time (and a few bits) by saying that the 1.1 mm were not the same as the vbit.

I also did not want you to be spending a lot of time trying to figure out how to fix a machine that was not broken.

Thanks Allen, I was aware that the 1.1mm bit was not a v bit but an end mill bit. I was trying it as I saw a video with a person using a 3/64" end mill bit and the 1.1 was the closest thing to 3/64" that I could find. My only confusion right now is why everything works just fine in easel but doesn’t seem to with vcarve photo. If easel could do photo carving I wouldn’t bother with vcarve.

The results you are getting from PhotoVcarve are due to the settings and the bit. Imagine if you were trying to carve letters in Easel but only told it to cut them .001 inches deep. Of course the results would not be very good.

The same thing is happening in PhotoVcarve, except the depth control is not as obvious since it is calculating the depth based on the bit, the picture and the settings.

@AllenMassey would you be able to send him a file you know works so he can run that on his machine and demonstrate for sure his machine is fine?

I can, but he will need the same bit to run it with.