X-Carve...Z axis all whacked out

My X-Carve just started to act up. I left my last project and came back to find the unit just went real deep on one section of the project. It had never done that before. I was carving about .2" deep and in on section, it was about .75" deep. Head Scratcher.

Today, I went to set up another project and as I was setting my 0.0.0 , the z-axis just did its own thing. Everytime I hit the down arrow, the machine seemed to pick what direction it wanted to go in. It might be three consecutive down motions followed by two up. Completely random.

Everything else seems to be fine with the unit. The connections all look good.

Oh yea, I’ve had this X-Carve for about 4 years now, so its not due to a setup issue.

Classic sign of a loose/broken wire. Double and triple check all stepper motor wires. Vibration over time can cause things to get loose or break.

Oh yea, I’ve had this X-Carve for about 4 years now, so its not due to a setup issue.

Glad to see you finally joined he forum.

Sounds like EMI to me. What kind of grounding have you done. Any changes to your machine lately.

Just like @JustinBusby said, this is typical behavior when a wire is loose or shorted on the motors. Don’t just visually inspect the wire connections…disconnect, then reconnect.

Well, I have an update. I did some troubleshooting over the phone with the Inventables help line.

First off, great help from the experts.

First I checked the connections like everyone has suggested. No issues there.

We swapped the X and Z axis wires on the Gshield to see if the issue would show up on the X-axis…it did. So, it looks like the G Shield has gone bad.

Thank you for your help everyone.

Hi all,
I’m wondering if I have a similar issue. I just started experiencing the Z-axis not being accurate. It just started a couple weeks ago, and I too have had my X-carve for a few years. Here is a photo of the Z-axis not going level with the other letters. The ‘E’ is higher. It has been also missing letters entirely. Would love some help on this!
Thank you! 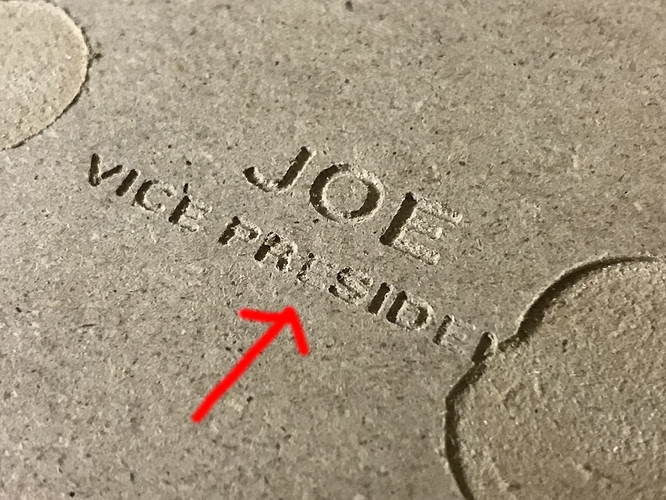 ***UPDATE
So I followed the instructions posted above by examining and tightening all bolts and connections from axis rod all the way to the X-Controller. I did this primarily all at the same time, so I’m unable to pinpoint exactly which of them corrected the issue, however, I believe it to have been the hex nuts inside the stepper motor belt spindles which ‘moved’ the most when tightened. This would make sense as the primary line to the axis rod.
I have performed two cutting tests and so far so good. I’ll continue to test and post if anything else occurs. I would also imagine this will correct some of the subtle path edging that I’ve been noticing in my larger layer cuts which I’m excited about as well.

Just today I fired my machine back up after having been in storage for about six months since moving. My Z is doing the exact same thing. I thought maybe the v wheels were too tight or the lead screw was gunky but to no avail.

I’m in a similar situation I have a CNC4Newbies z slider. However, I have gone over everything mentioned in above, even swapped the x and z axis cables to see if it might show up on the x or resolve itself. It’s cutting really deep like OP had going on, but no loose or broken wires, and reconnected everything. I have it cutting approx 3/4 of an inch deep of material and it wants to cut a full inch. It also dives a bit to deep for the first cut but will do all the remaining steps down just fine. Everything was great yesterday but I noticed today that when I used the z probe it wouldn’t raise itself the 1mm distance I selected so I could slide out the probe. It would essentially just touch the probe, sound like it’s pulling back but pretty much just stay right on top of it. After that started happening the above became the new norm. I’ve adjusted my $102, rerun the machine setup several times (and then reset $102 due to my CNC4NEWBIES z slider), I even wiped my browsers cache in case there was conflicting info floating in there. The kicker though is when I reran the machine setup and did the probe test in there, it worked just fine and unlike the OP’s jog issue, mine will home and Jog perfectly.

Hey Phil, I have my Z $102 at 53.333 and it seems to be jogging perfectly. It was all working great yesterday with that making nice cuts, the only thing I noticed differently today was the easel update for the feed override. Of course, it may have been there yesterday and I was just oblivious

hi, brand new here, but this seems like the correct place to go with this question. I’m just getting my x carve going, its an older one from like 2 years ago but I just recently set it up, and I upgraded the spindle to the dewalt, I’m running the machine through vcarve pro into universal g code sender. went through every calibration step I could find from tensioning the v wheels and belts to calibrating the right number of steps in universal gcode sender and basically thought I had it running perfectly. then I thought I would put down a mdf spoilboard and get a 1" surfacing bit to plane out the spoilboard so I could have a work surface completely parallel to the tool, but this is what happened 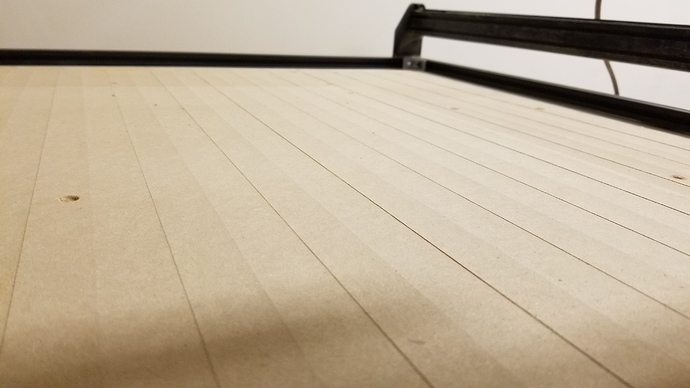 it basically perfectly went up and down about a light 16th on each pass, I’m going to check all the wiring like it says above, does anyone here have any other suggestion as to what else could be going on?

It’s hard to tell from the picture but it looks like a tramming issue to me. One side of the cut is deeper than the opposite side correct?

Not sure what you mean, each pass made an even cut, but at a slightly different height, alternating

Success! At least on mine it turned out to be something simple fortunately. THIS time at least. Loose screw on the coupler for the CNC4Newbies z slider. Since the coupler provided by CNC4Newbies has some slices/ribbing to give it a little flex it actually managed to loosen itself then twist the upper coupler half and then get stuck again! So there was this odd bit of give when it would spin causing my initial DOC to be off. I’ve swapped the provided bullet thread screws with loctite laced replacements so hopefully that’s the end of that.

correct, exactrly its super consistent but each time it turns around the height is a little different