Oh how funny. You were the person that originally introduced me to Chilipeppr.

Hey, just saw this! Here’s a photo of a PCB I designed as a “stress test” to see how fine the machine could go before it failed to produce a viable trace: 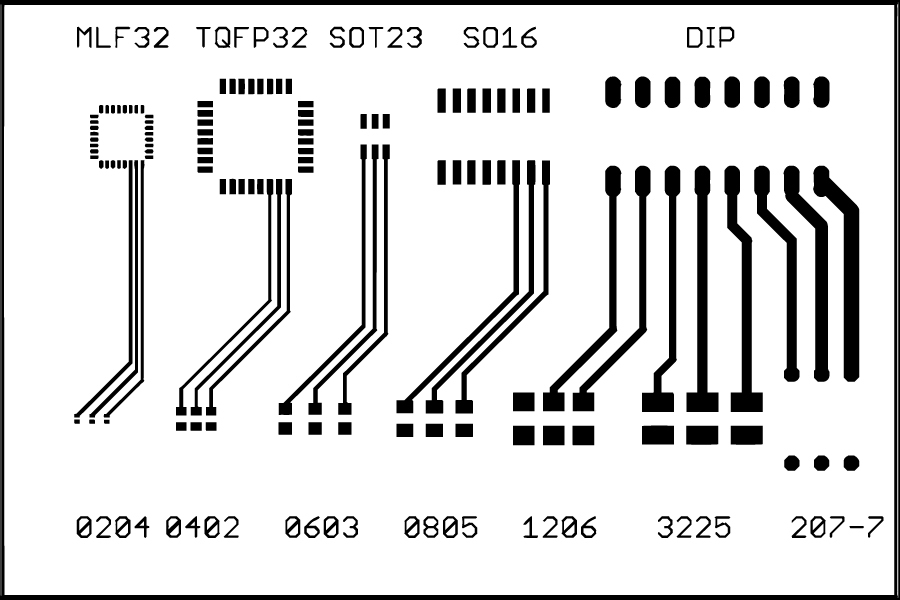 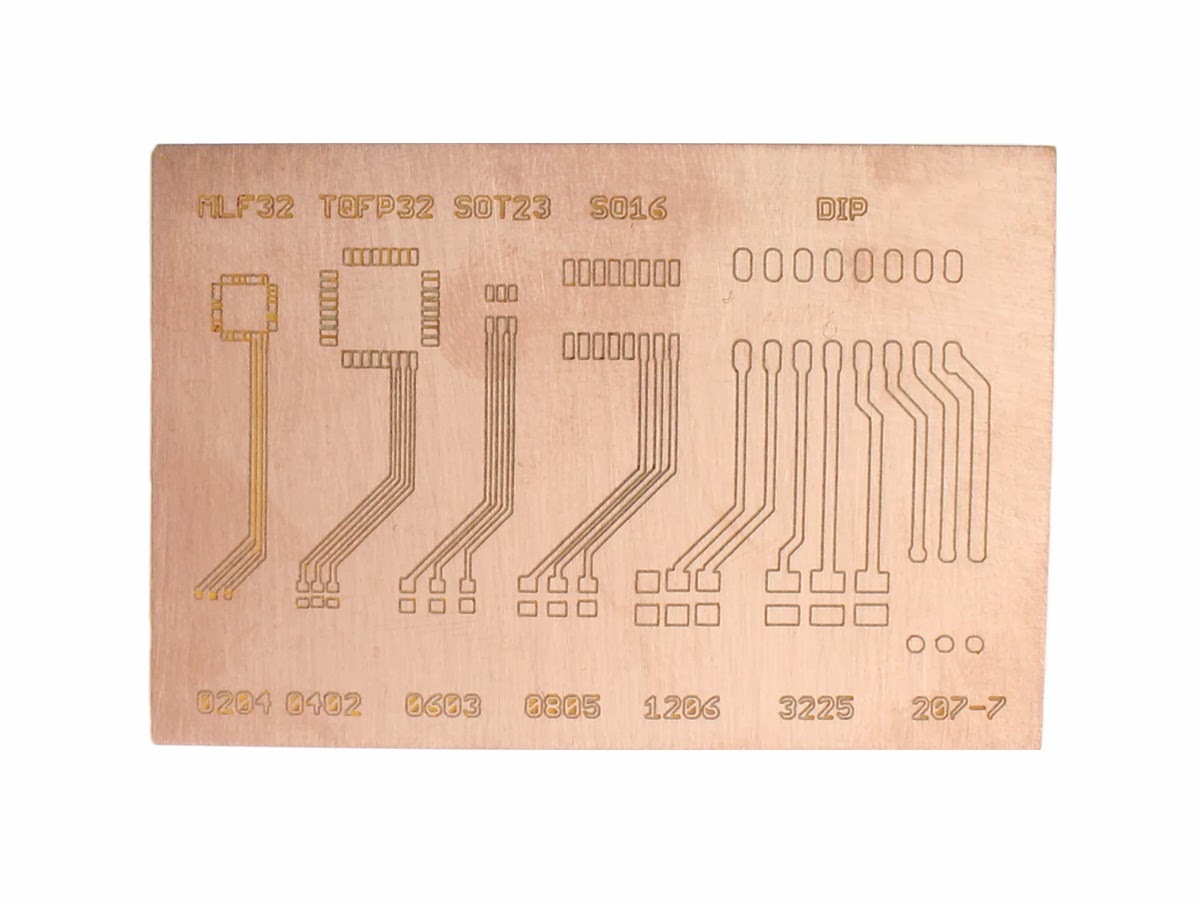 It did pretty good all the way down to 0402 & that tiny IC package size and then it gave up, which I can’t really blame the machine for because that’s hella small.

Here’s another board I did that’s more “human” scale: 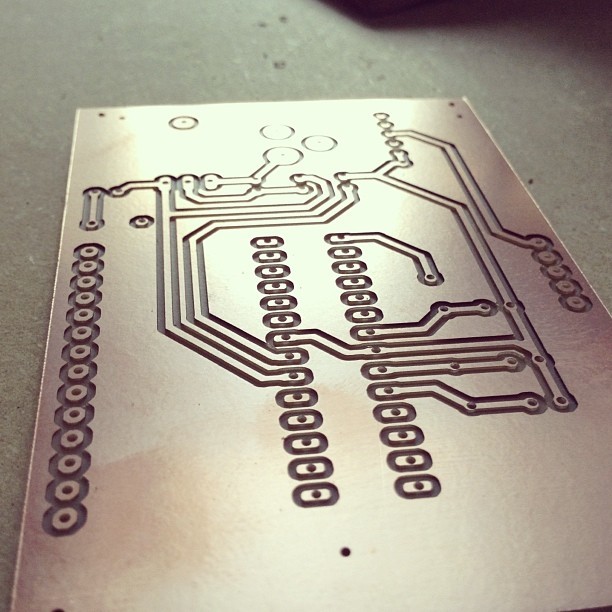 That last one is an ATMEGA 328-based Arduino clone

And that’s Shapeoko 2, right? I’ve seen those images before.

That’s awesome, @MichaelUna. I’ve got the Inventables PCB milling bit set on the way. Any tips? What did you use for the boards above?

Hi @MichaelUna, I wanted to check in again and let you know my university’s approved the funding of an X Carve for my startup, pending proof that it has the accuracy to machine smaller SMD packages like the ones in your test board. Since you already have the X Carve, PCB Stock, and the SMD package test files, would you have the time to run the test on your x-carve? Since the images above are of PCB that was milled by a shapeoko 2… If not, @JohnLedden has accepted the “Precise PCB Milling” bounty (or whatever it’s called) and could use that PCB design file for the test.

With no calibrations, leveling or any effort this is my first fine pitch attempt after finishing my build.

Left side turned out quite well. Right side lost some traces. I’m thinking its a leveling issue. However, I find this initial attempt at making a FT232 breakout board very positive. Also, I had to run the job twice because I didn’t zero the Z-axis well enough the first time, which I think contributed to the lost traces.

I only see improvements with some tuning.

That’s really fantastic for an “out of the box” run. Thanks a lot, bald. Are you using GRBL or TinyG? Did you run your board through Chilipeppr?

Awesome. So these results are with zero pcb warp compensation and just ran quick and dirty. Oh, and what size x carve?

My first attempt to cut traces looks exactly the same. I used a new ‘Solid Carbide Engraving Bit’ (Part #30499-01) from Inventables. Under a Microscope, I can see that the copper is not always removed properly, but rather pushed towards the borders. Also, the bit was damaged very soon (lost its sharp point to some extend).
In a second attempt, I used a cylindric carbide endmill for aluminium milling, What a difference! Very sharp edges now along the pockets, and copper is nicely cut out, no sanding needed!
My preliminary conclusion: The engraving bit might not be the optimal tool for cutting traces on PCBs. I have now ordered some 1/64" carbide endmill bits, suited for aluminium or even steel. Will tell you the results once they have arrived…
P.S: : I am impressed how precise the toolpath is followed in my X-Carve. It appears to be very little warping when the material is properly fixed.

Pretty sure the one he linked to is in that kit.

Yes, but why use a conical tool? With a cylindric end mill, the effect of ‘not perfectly flat’ surface is no problem. With the conical bit, I might loose some traces when Z-level varies. The copper layer is realy thin!

It seems that you would be better served by the surface-mapping feature of Chilipeppr for PCBs.

Yuuuuup. It seems like Chilipeppr should be the title page for the PCB milling 101 tutorial for cnc users.

Tony’s absolutely right, Chilipeppr is the way to go. I would love to see your results with the autolevel feature.

My PCB project is on hold until I get the new bits from drillman. In a week or two, I will try again with Chilipeppr and various types of bits!

Ok, sounds great. In addition to autoleveling, I might suggest reducing your spindle rpm (if possible) or increasing your feedrate (within reason). The copper being pushed out makes it seem to me that the feed rate might be too slow, or the spindle too fast, thus heating/melting the copper instead of cutting.

@MichaelUna, I’m still waiting for proof that the X-Carve is capable of fine PCB trace milling. Have you made any printed circuit boards in the last month with an X-Carve that you could take pictures of?