Hi,
Apologies if this is a common question. We have just purchased the 1000mm ‘Fully Loaded’ option and in the final throws of assembly. One thing that strikes me is that there is no obvious way to control the spindle speed of the DeWalt through the X-Controller. Have I missed something or is it generally accepted that the spindle is manually turned on and set to speed on the router before engaging the program?

That’s what i’ve been doing, generally leave it on number 1 with the exception of aluminium, then turn it up to 3.

The stock set up is very manual. Thats the design of the router not the controller. There is a relay you can get from amazon that you can use for on/off function. Or a SuperPID for the whole ball of wax.

Thanks, thats good to know. I’m relatively new to this so I wasn’t sure.

Thanks Curtis, do you have a link for the relay/SuperPID at all? Its not something I need to buy straight away but it would be good to have it in my back pocket when I fancy upgrading it.

An iot relay is the better deal in my opinion. It’s $20 and is a simple two wire hook up. Dozens of conversations about it around here. The PID will control rpm but It’s $160. And the set up is a bit more than two wires lol.

@JackMyers Here is the IOT Relay:

Why didn’t I think of that lol

You should look into a VFD
http://www.ebay.com/itm/like/261861602517?lpid=82&chn=ps&ul_noapp=true
This is what the pros use.
8000-24000 RPM
look around for them and you might find one cheap enough.
They are water cooled and you have to make sure it has an option for US power and not UK otherwise you would have to get a power converter.

Thanks for all the helpful advice guys, I dont think my notifications have been setup properly (or they are going stright in to my junk folder!) so apologies for not replying sooner. I got my first cut started last night and am really happy with the results. The IOT relay is something that I may consider in the future but to be honest, its really not that much of a fuss to turn the spindle on before setting the program go.

Hello all! This seems to be a very old thread, but I’ve just finished assembling my X-Carve and was wondering the same thing.

So if you have a DeWalt 611, do you generally “set it and forget it”? Meaning just put it at a number you like and then let the software set the travel speed for each particular material–MDF vs. hard maple vs. aluminum?

I hadn’t really thought about that for my first few carves. But after having a few more under my belt in some test material, I was wondering about what the veterans think about this.

I would appreciate any help you can all provide.

Thanks for your reply! I’m still a bit nervous about snapping off a bit. So I might keep it at 2-3 for a while until I get more practice.

I’m thinking that a faster spindle speed would lower the chance of some of the smaller bits breaking off since they’re more rapidly chewing away at material as they’re traveling in the x-y direction.

What do you think?

Or will me keeping the router at a higher speed just unnecessarily wear out the router sooner? This DeWalt 611 seems pretty hardy. I’m less convinced about these little 1/16 and 1/32 bits.

I’m thinking that a faster spindle speed would lower the chance of some of the smaller bits breaking off since they’re more rapidly chewing away at material as they’re traveling in the x-y direction.

I know it seems logical. But way wrong. Bits are designed to cut at a certain feed rate / rotation combo. Your goal should be to cut the proper sized “chip” from your material. The chip is what draws the heat away from the bit as it’s cutting. To fast and your just making dust, not drawing the heat away from your bit. It will not take long to dull it due to that heat. Then it will break anyway. You should search the web page of the manufacturer for their suggested “chip load” for that particular bit. Then search chip load and feeds and speed here on the forum. There are plenty of threads.

There’s also the route (ha!) I am currently going, since I haven’t wired up my SuperPID yet. I had already removed the Dewalt speed control (required if using another method of controlling it), so it’s running max, but in the interim, I use a router speed controller. Harbor Freight et al have them for about $30…just a dial to move the speed up and down. I’m not sure if it goes lower than the built-in one, but I can at least get it down to a non-scary speed.
The SuperPID really is the way to go, though, as you can go into Arduino and set min/max RPMs as well as control it with GCode

I say use one of these… 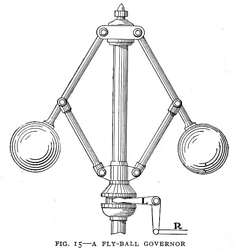 The more I think about it, a steampunk CNC machine would be pretty sweet. Put that thing next to a Rose Engine, and you’ll look like a mad scientist.