Xcarve carves the first half normally (50%) but when it is going to start the second half, it goes back !.5 inch, why?

I tested the carve carving just the second half part (erasing the first half) and it went fine, I note also that it looks xcarve makes a bigger effort to move itself, at least I think so, cause noise of the belts increase. 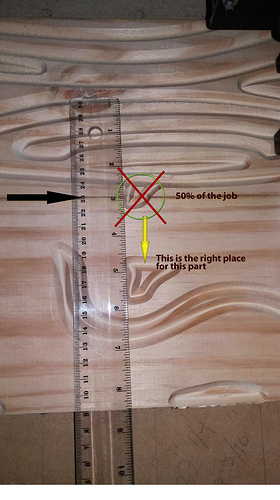 Robert, U know its curious, I noted it, After I cancelled the job, spindle went to the zero point but not the original, it went, also 1.5 inch up before the original started.

My God, how do I adjust potentiometers?

I really thank You guys for your help, besides, your fast help!, Thank God it is just a matter of tightening some screws.

Thank You so much Robert.

Is there a measurement of belt tightness? How do you measure it?

Arduino. why?. I updated it

Phil, it was not confused, but it was very problematic, everytime, I tried to change the potentiomenter, then the rail on x, and spindle of course, changes the route on X axis, Almost broke limit switches and structure. I guess the best way to do it is using the voltimeter, but finally the real problem was the screws, I tightened them and Voilá, problem solved.

Thank God,lol, the noise was horrible!