My Xcarve hass been running well for over a year. Suddenly, the most simple carves are wandering off path as shown in the photo. I flashed the arduino and cleaned/checked wiring. Still same results, even with the most simplistic drawings derived off easel.

I appreciate any thoughts you can share to resolve this 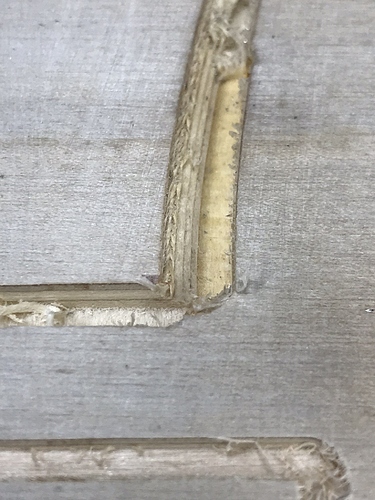 Thanks for the response Justin. I retensioned and checked my v wheels. I figured I would try a test cut that eliminates as much mechanical variables a possible. I made a single straight line in easel to cut all the way thru the wood. I took shallow cuts. Seems like the Y axis wants to take a small step, but it should remain un-changed thru this cut. 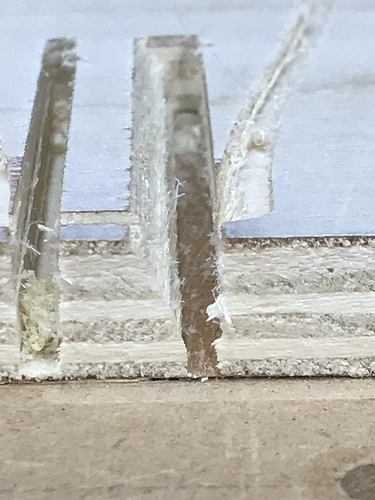 As Justin suggest it could very well be mechanical, pulley slipping or something like that.
Another possibility, though not often seen, is that the Y-drivers pick up noise and interpret those as step commands. Power wires / stepper motor wires close to stepper signal wires?

could it be the belt pulley slipping on the motor shaft?

Thanks so much guys for the responses, I truly appreciate it.

My initial thought was the pulley was loose, (I didn’t use loctite when I assembled the machine). Nevertheless, the pulleys are still firmly on the motor shafts.

My wiring is has always been encased inside braided jackets running inside the drag chain. I haven’t considered calibrating the pots, will look into that today- thanks Phil.

For a while, I have been considering the new xcontroller, but never had a solid reason to drop the cash for it, maybe I have a reason now. We will see.

just wondering … for you test cuts, how many passes did you make and how deep were they?

… and what happens when you cut in the other direction?

When I cut in the other direction, same issue. X axis tends to wander to toward the right of the machine.

loosened the belts, carriage moves nice and free. Adjusted the x axis pot. Adding more current decreased the stairstep problem quite a bit but not completely. Eventually I dialed in too much current and the motor stopped working. I hit the most extreme amount of current before the motor would stop, but still getting small bit of stairstep effect.