I wanted to get people’s opinions and pros and cons for stiffening up the y-Axis. I have narrowed it down to two styles I believe to work the best, a bracketed system on the original y-rails like what Phil did, 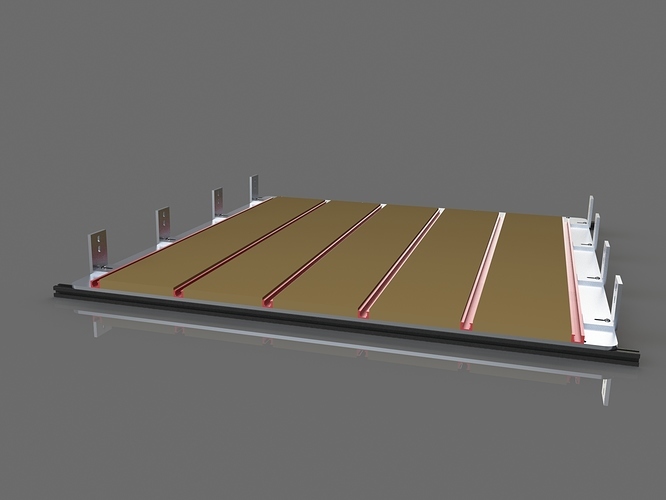 Or Replace the stock y-rails with the new makerslide extrusions and seconday braces like curtis has done. 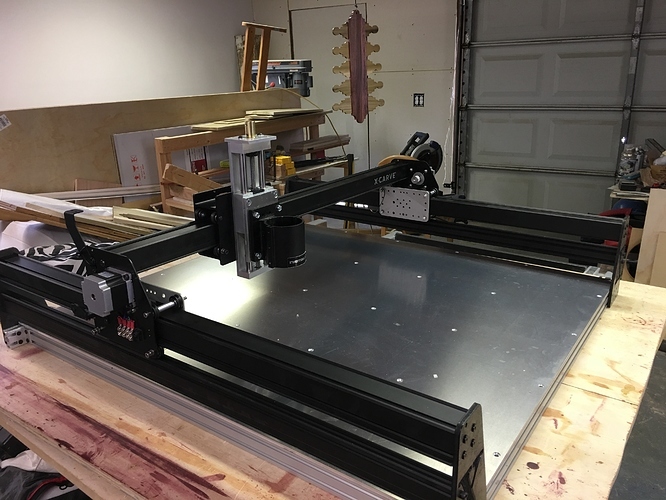 Personally I like the sytem curtis used, I think the double plated x-plates with the extra v wheels is a huge advantage over the single plate design. With that, the new x makerslide is obviously more rigid then than the stock (un-bracketed) Y-rail and paired with lower secondary y-brace should be pretty rigid, but how much stonger is it? The problem I have with this is that the new maker slide leaves little room for added support for future upgrades or stiffening.
Phils system on the other hand, utilizing the L brackets from the base to the y-rails seems to be a pretty hard system to beat. It is simple, effective, and has the ability to be modified, changed as needed. I would also guess that the L brackets offer more rigidity to the flex of the y-rail than the new makerslide alone. To me the down side to this is not having the duel x plate.

What do you guys think?

I looked at this earlier also. The issues as I see them are that, in Curtis’s setup, there isn’t full documentation yet and only a few photos, without the necessary details to fully duplicate. Whereas Phil’s design is extremely well documented, can easily be modified, allows for expansion (can we say 1500 mm y rails), and as you pointed out is very simple in concept. Just my opinion and observation. If Curtis documents with sufficient detail his modifications, then that would be another story, requiring very serious contemplation.

Where can you find the links to Curtis and Phil’s designs? I am looking to tackle strengthening the Y rails as well.

Would it be possible to simply buy additional makerslide end plates to use in place of the angle iron? https://www.inventables.com/technologies/makerslide-end-plate

It looks as though they would work and are already pre-drilled with the correct spacing to fit the Y extrusions for mounting. Has anyone done this before, or would it not work???

Curtis’s is here — Finally looking like an X-Carve again... well kind of – Titled " Finally looks like an x-carve again"… Both are in the x-carve forum under "upgrades.

They possibly could be used but in my opinion without the strength that the 90 degree angles gives you it wouldnt be much benifit, not nearly as much as having the angle in there anyway.

The old Y plates are an exact fit. Remember I have the 20X 40mm extrusion for my base frame.

The L Brackets of course would be stronger. I gave it a lot of thought. But in the end they would have gotten in the way of the wasteboard ive been planning. (Not sure how that’s gonna work out). I may end up going with them on the lower rail for racking support. Not sure how much good either would do with my set up. As far as documentation goes. (The mod isn’t completed yet in the photos). And most of my stuff is a straight forward steal from @PhilJohnson. The wide makerslide for the YRails it fairly simple. You have to cut new plates (so you’ll have 4old ones on hand). 75 mm M5 .8’s for the top wheels and 85 mm ones on the bottom wheels. Purchased from Albanycountryfasteners.com with the 6mm eccentric spacers from openbuilds on the outside of the plates. He axle set up looks like - 1 mm spacer, Vwheel, 33 mm of spacers (I used a 20,9,3,1 openbuilds.com) a VWheel,1mm spacer. The inside plate is from Inventables. And 2 new wide makerslides of course.

So I spent some time on this yesterday and think I have it figured out, at least a solid general concept of design. I had already redesigned my x-axis and the x axis side plates, they will be solid, no worries there. I am working on how to strengthen the Y-axis and tie that design into my new x-plates.
I am going to go with a design like Curtis’s and use the new makerslide as the Y rails and having doubled x plates for more v-wheels. (at this point I don’t see myself needing anything bigger then 1000mm) By doing this though I will be loosing ~40mm on the x axis because of the new design, and that is a problem for me. So I started working on fixing it. My plan for this is to extend the distance between the two Y-axis rails to compensate for the loss of movement in the x axis, problem solved right,.sounds simple enough…no.

By doing this means that my makerslide will be to short to reach the new x-plates, unless I go back and do some new design work on the already new x-plates, which I did and think that everything ties in nicely and will work.
The problem with this is that my x-plates with the new design will have to be cut out of 1" aluminum ( the x-plate itself won’t be that thick but the offsets from one surface to the other are), which isn’t a problem but finding the scrap material to do so is. I can’t afford clean stock for these as most of the material will be cut away anyway. So I might have to get real creative at work and make sure I can leave some scraps big enough to save for this project.

I will try and post some pics of my model later tonight, My assemblies are kind of a mess right now after all the modifications but should be pretty easy to get back in line.

PLEASE CRITICIZE, I did most of this fairly quickly yesterday and could have definitely overlooked some things, got ideas why something in my plan wont work or ways to improve them I would love to here it…

Would it be possible to use 40x40 linear rail instead of the new maker slide? Such as Open Builds http://openbuildspartstore.com/v-slot-40x40-linear-rail/
along with the Open Builds http://openbuildspartstore.com/openrail-linear-rail/ to create your own version of the new maker slide. It is available in sizes greater than 1000mm.

My plan was to get two more Xplates and use them instead of the little plate I have on the inside. Put some bolts and spacers in the top between the two of them. Then you can bolt the xrail to the inside plates.

I have this exact mod before the new rail came out. Worked pretty well but the bolt on rails are hard to get perfect.

Perhaps Inventables would be willing to offer the new makerslide in longer lengths.@zachkaplan

That would be awesome!

I’m also wondering, instead of using the X axis end plates with a second inside plate, separated by spacers, if you could use a pair of X Carriage extrusions, sans the Z Axis?

Where would you mount the X Axis makerslide to?

I have 1800 mm Y-axis and have a jog in one motor how did you over come this issue. I do have new X-controller but for some reason it jogs.I switched motors and Y-1 and Y -2 around but still have problem V-pully’s are as finger tight and still does same motor even if I change motors all connections are soldered cannot solve problem any help out there??

I would think it would not be too difficult to mount the X Axis makerslide to the new carriages.You might have to drill out some additional holes.

Interesting. Bringing the XAxis lower towards the Y axis rails could provide some additional rigidity. The holes would need to be precise. I’d hate to make a mistake at $40 a pop. I wonder how much range would be lost in the Z Axis without cutting new Yplates.

That I do not know.

I’m THINKING, if Inventables made the z axis extrusion ( gantry piece) available by itself…you could mount it on the bigger maker rail just like you do on the z-axis… add a plate to mount the z gantry and you already have the mounting for the motor…