I checked all of the other great resolutions and this does not seem to be covered. I am setting up my machine in Easel. My Y axis motors are only trembling when completely disconnected from their belts. If I kill power and I manually rotate each yaxis motor the gshield Y axis blinks. I tried turning up the pot on the Yaxis and it had no effect. (This seems to be the usual fix) I checked and it appears my gshield is seated ok (and everything else works)

I have other NEMA 17 motors that I could swap out, but they don’t have a drive shaft sticking out the back end.

Summary: X works fine and if I give my delrin nut a little exercise, z will be fine also. But both Y motors are not doing anything but jiggling when Easel tells them to jog. Anyone have any ideas?

Would moving the y axis wires to the x axis on the gshield be a problem?

This problem is usually caused by one of the Y-steppers being wired backwards.

I appreciate your reply. Both motors are not touching their belts and are free to turn whichever way. So if I wired them backwards then they will both turn, but one would run backwards. I hope I don’t have a bad gshield.

Make sure you check the wiring on the Y-Axis, two wires are swapped in the instructions, that way one runs one way and the second motor runs the opposite direction…so two wires need to be swapped for them to work properly.

When you get the end through the same hole on the left Y-Plate strip it as before. Now you’ll twist these wires with the left Y-Motor wires. Twist them as follows: red to white, blue to red, green to green, and black to black. Insert them into the terminal block one pair at a time. When you’re done your left Y-Plate should look like this: 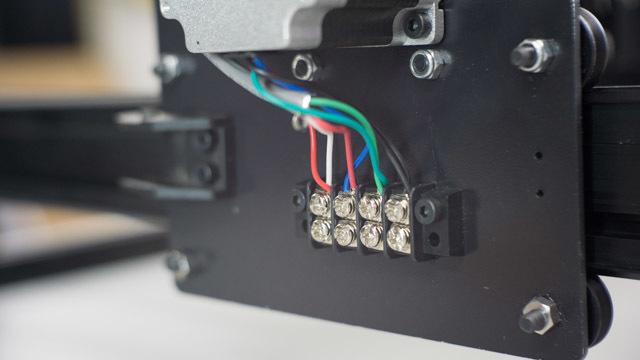