A little background… I do electromagnetic analysis, mostly radiators/antennas, also known as ‘apertures’. So a running joke for me is that I work for Aperture Sciences, the fictional company from the Valve computer games Portal and Portal 2. 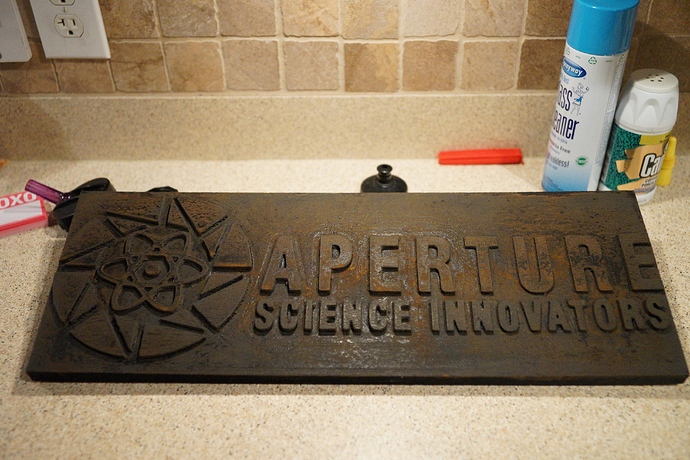 Carved 0.25" deep in 1" thick polypropylene foam, then finished with an iron paint and a Japanese brown acid etch treatment. (I think @BrianSaban might be using similar finishes from a post of his…). Just a bit under 24" long axis.

Plan to stick to goofy superficial projects like this while I dial in my tuning with the stock spindle then move on to more serious work after I upgrade to the DW 611.

Don’t think the image finished uploading before you posted

Yeah, too big. Downrezzed it some and tried again…

That’s awesome Richard!! Would love to try this.

Can you or @BrianSaban post some details on the paint and patina materials you are using please?

As a portal fan I approve.

So…finish on this isn’t great, but here’s what it is for what it’s worth. Note that this is on that pink foam 2ft square boards you can buy from HD for like $5, so that alters a step or two. Normal spraypaint in a rattlecan actually sort of tries to dissolve this stuff (which I used to slight advantage - what looks like a rusted-out pitted section in the background toward the bottom right was a place I left the primer thin on purpose so the next coat would dissolve in some). I’ll try to be clear which steps are for the type of finish and which were because of the base material.

The design itself was just a google search for one of the older-school logos from the 2nd game, imported into Inkscape, played around a little to widen some of the gaps etc. so it would carve with a 1/8th bit, carved all one depth. I actually did the 0.25" depth in 2 passes at 0.125" each an a travel rate of like 65…got a little ‘hair’ on the cuts but I think with foam that’s probably inevitable once the bit gunks up a bit.

Step 1: torch it. Well, heat gun at least - VERY quick passes, not too close, to burn/shrink down the ‘fuzzies’ in the foam at the carving edges. Test first on a fresh panel to get a feel for it, you can pretty quickly get this foam to outgas all its bubbles and go flat in a hurry if you overdo it. This stuff is so soft you really can’t ‘sand’ on it, it takes a permanent dimple from a fingernail. Then I just hand rubbed it a bit to try and carefully break off anything remaining that was too fragile - a soft toothbrush might’ve been acceptable but I didn’t have one handy, so pinky fingernail picking gingerly like at your own nose works too.

Step 2: prime. For this foam I tried Kilz, just slapped it on pretty heavy with a disposable brush (bristle, not foam) then went back and ‘drybrushed’ to get as much excess out of nooks and crannies as I could. That step would probably be skipped on another material like MDF or whatever, might use something to seal the MDF against moisture absorption or whatnot instead (shellac, whatever). Because Kilz is white I would’ve preferred not to use it, but learned from an earlier carve what happens when rattlecan paint hits the foam directly the hard way.

Step 3: Base color. Any old rattlecan of flat black. I have no idea what brand I used, been in the garage for decades. Light passes, different directions to get the vertical carved sides but not too heavily, never want it to look glossy wet as you go or it penetrates the primer - did do on purpose in a couple places for the melted-down pitted effect.

Step 4: Iron paint. The stuff I use is by Modern Masters, “Reactive Iron Paint”. Its a pretty dark grey-black and not terribly pleasant to work with. Stinks and it’s very ‘gritty’ - almost impossible to mix smooth, but the sort of sandy texture goes along with the rusting to follow. This gets brushed on somewhat thick again with another disposable bristle brush, then try to work out excess same as step 2, and tried to lay down somewhat uniform brush direction as a final combing of the face (the stuff just does not smooth out evenly…think of sand in snot and that’s about the texture). The instructions say do one coat, wait an hour, then do another, but as I already had a black basecoat I just did the one.

Step 5 is the reactivity. Important part here is the iron paint from step 4 should still be damp!! Probably many different reaction agents could be used - watered down muratic acid (like for pools), vinegar, heck probably even lemon juice would work. I’m lazy though and bought a premixed reaction agent that normally does a Japanese Brown verdigris on smooth finished iron if you put it on hot metal and let it dry almost immediately, then clearcoat. Not clearcoating lets the verdigris finish turn to rust pretty quickly which is what I was after anyway for this piece. So I just doused it good (spray bottle) and let it sit outside overnight (moderate temps low humidity, nice Texas fall weather starting here) to dry. The mix I used is from a company called Sculpt Noveau. (I also have some copper nitrate and other green/blue verdigris finishes from them to try on the bronze paints.)

Last step, clearcoat. The clearcoat I used is also from Sculpt Noveau and is their ‘matte’ clearcoat in a rattle-can - looking at the labeling and judging from the smell though…it’s just a spray lacquer of some sort. Again, this could likely dissolve into the foam if I didn’t already have the other gooped layers on it. A couple layers, quick passes, really just enough to hopefully stop further reaction (not that I’d mind) and ‘glue down’ the loose particulate rust finish against handling damage a bit.

It’s up on my office wall now at work. I’m a tad bummed no one has noticed yet so I can brag on it here…

Some links for the paint and finishes:

FYI I bought all these to refinish my new computer case build to look like aged metal; was intending to blend the iron and antique bronze paints together and hit it up to get hopefully a mixture of green, brown, tan, rust effect streaks on it. Haven’t had the guts yet since it’s a CaseLabs $500 case, but that’s fairly high on the project list for this fall/winter.

Thanks Richard for taking the time to explain it all.

I love the look and by the sounds of it, being accurate with the finish is also not necessary or even desirable. I must give this a try.

I think if you want something that looks more like ‘good’ machined metal, it might matter more. The Modern Masters stuff might or might not be sprayable or rollable but then how one gets it into carving recesses is beyond me. They do sell a reducer but don’t specifically say its for their reactive metal line so compatibility is still unknown in my mind, but I was thinking of trying it out. The bronze has either smaller particles or they don’t clump as badly; it looks like it would brush much smoother (and you could use a brown or desert tan sort of basecoat underneath to help hide where it doesn’t).

Rust is by nature pretty destructive of surfaces, so some sloppiness is entirely acceptable for this part (and it fits in with the decay of the game world it came from) and if the surface were harder to begin with (wood or whatnot) I could probably work the finish better by adding layers and buffing back as needed.

It looks better in person, someone finally noticed it and asked how I got a slab of metal to hang on my cubicle wall without screws…and if it wasn’t up there strongly was it a safety hazard? – not exactly the reaction I was hoping for.

I had to cop that it was foam to keep the cubicle police from getting wound up.

Foam boards at Home Depot? Did you use the insulating foam? I looked at those boards and decided they would not carve well (they just did not seem dense enough). If that is what you used, I was really wrong.

That looks really nice. Never would guess that it is made of foam.

The “pink stuff” is a lot denser and carves a lot better than the white Styrofoam sheets.
Home Depots only carry it in 2’x2’ squares.

Thanks, I will look for that.

This must be it! 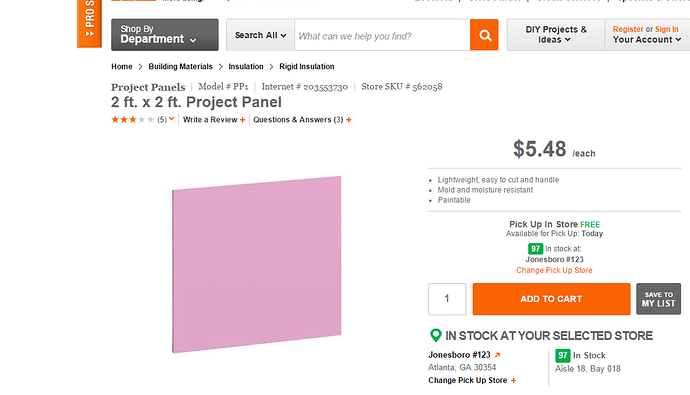 They do ‘hair’ a little on vertical edges, but that might be my bit and rates (I think I was spinning 14k rpm, 65in/min travel, 0.125in depth cuts, 0.125in dia straight ‘starter kit’ bit (2 flute?). The bottom of the cut was fairly clean, just slightly more porous than the exposed surface as they come out of the mold.

It does ‘bow’ a little and I didn’t use doublesided tape to help hold it down, just side clamps (this stuff presents so little load to the bit I just didn’t use good practice), so any wavering you see in the bottom face is probably because of it flexing a hair as I bumped it with the vacuum nozzle while cutting was going on. It’s also not obvious from the picture but the right third or so, except for the far right edge, was a bit ‘thinner’ than the rest (the “A” in innovators is the most obviously shallow, and the “U” in aperture above it), so the profile of the letters isn’t entirely flat, which is why I went for a pretty deep 0.25" cut depth…I didn’t try a flattening pass first because “lazy”.

Wow, that looks great! Thanks for such great directions, I think that I will try to put that technique to use this Halloween!

That looks just amazing!
Quick question about the iron paint, what amount of paint did you use for your sign?
I saw it is available in 6oz and 16oz containers.

I bought 16 oz of both the iron and the bronze, but that project could easily be finished with the smaller size. I used maybe 1 - 2 oz of it on that sign.

Have since then used the bronze on the computer case I originally purchased for and didn’t get quite the effect I wanted - more of a brown or ‘spent ammo’ bronze verdigris than the greens I was hoping for. There’s a hint of green here and there but not much… I still have over half of the bronze bottle left, too… Forgive crappy cellphone pic: 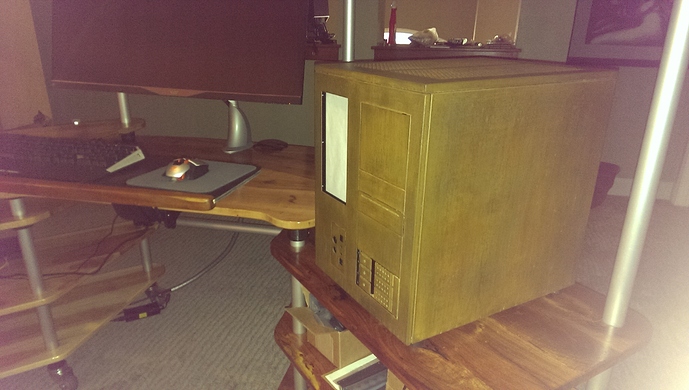 That’s a CaseLabs Mercury s8 so it’s pretty big…the white rectangle you see is paper taped up where a plexi window will be, while I work on making the mirroring arrangement to use a pico projector in rear-projection orientation internally as a ‘screen’ and line up to fill that space. Eventually I’ll have to probably both diffuse (sand) and use tint film on the window plexi since the projector is a laser-based one and I don’t want to blind myself letting TOO much thru the window. The screen on the PC will show CPU and temp and fan speed stats thru Rainmeter programming while the big curved screen visible to the left is my ‘real’ monitor.

My goal is to achieve similar result to the one on the picture below (I’m gonna use an MDF). 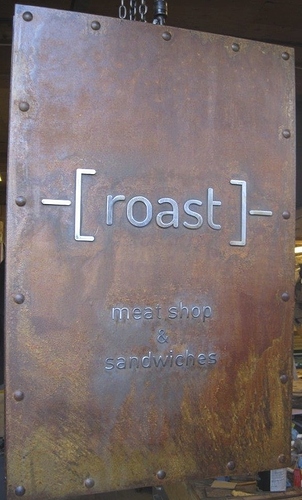 I didn’t order the activator, will give a try to a mix of hydrogen peroxide, salt and vinegar.