Your thoughts on what need schanging

So here’s my first full project for myself. I used the feeds and speed from g wizaed and this came out. My settings on my dewalt were set at 4 in the beginning and then bumped it up to 5.5 near the end. The end section is on the far right.

So what could I do differanlty to help eliminate the fuzz in the lettering. Is there a way to get a clean cut? 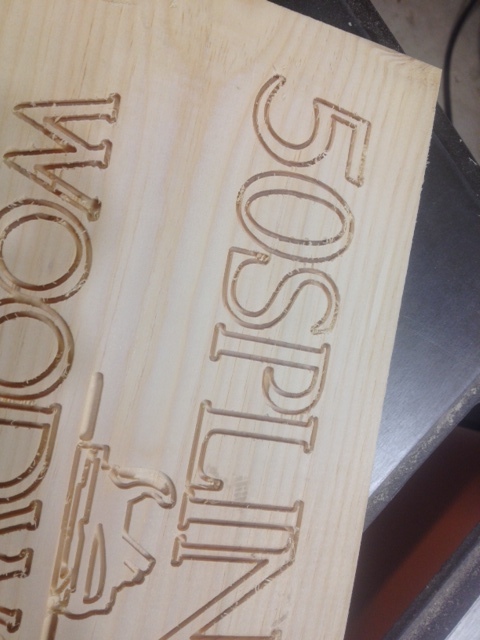 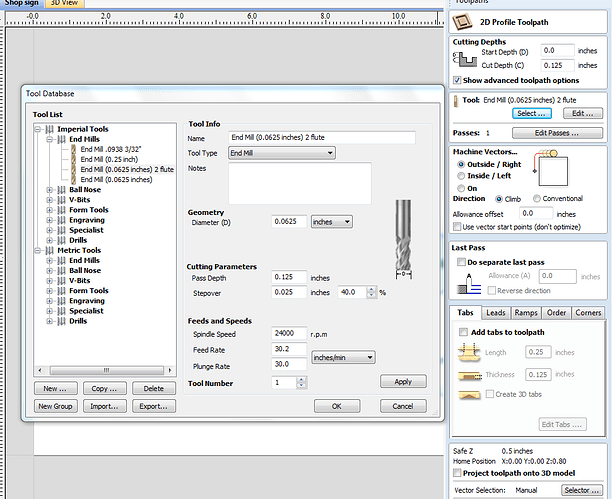 downcut bit fixed this issue for with mdf at least.

Your feeds and speeds won’t have too much effect on the fuzzy top edge. Like @AbearDesign mentioned a downcut bit would help, or even a straight flute bit.

Downcut bit will help a lot. Is that pine? The dewalt is set way too fast. I cut pine with the dewalt set between 1 and 2.

It is pine. Good to know pine is setting of 1-2. Downcut bit Guess I need to add that to the list.

on the note of speed… running it too fast will dull your bit which will make it worse. Unless you push your feed rate faster to keep the chip load.

I don’t always use a downcut bit, I sand the fuzzies off, only takes a few minutes on most things. Did you use a 1/16th inch endmill at 30 inches per minute as the image above shows? With a 0.125 pass depth?

That is what I run that combination at on pine.

K I’ll give that a shot and see what happens.

Much better. I did find that there was still a bit of chip out on the lettering but I think its a combo of font and pine.

The faster you have your router go, the sooner you’re going to have to change brushes. There’s also a point where your machine will not be able to move fast enough (accurately) to be able to keep up with the RPM’s of the spindle, and you’ll end up heating up your bit and trashing it. I try to keep it 1-2 for everything I can.

Chipout can happen from a dull bit, but also from a super-aggressive cut. Try to slow down your feed rate a little bit and see if that gives you a better finish.

Someone else recommended some little scotch-brite polishers on another thread, I picked some up on Amazon and they do a really good job taking off the little fibers. http://smile.amazon.com/gp/product/B00FUUHH10?psc=1&redirect=true&ref_=oh_aui_detailpage_o05_s00

Thats your upcut spiral bit, either go with a downcut or straight flute.

I don’t know the answer, so asking, but in the image of the settings, it’s set to “climb” for the direction. Will that make it worse, should it be set to conventional ?

There brand new bits so I must need to slow down the feed rate a tad more. By the way I used your pots tip and it worked great. Keep up the good work!!

Keeping the Dewalt at 1 or 2 is a good RPM for the work you were doing.

I have one of those el cheapo brass bristle brushes from harbor freight on my cnc bench just for cleaning up the “fuzzies”. works quite well most of the time.

This doesn’t mare up the work piece?

I use a brass brush on soft and hard wood to clean up the edges/fuzzies, It can tear up soft woods if you scrub really hard, but take it easy and it works fine.

Nice, I will have to give this a try!

Your feed rates are fine, an upcut bit tends to produce fuzzy edges. Usually a quick hit with sandpaper is all it takes to knock it off.