I’m pretty sure I already know the answer to my question but just seeking confirmation. I am having problems getting consistent depths at different points of the machine.

At first I thought it was the material because at first I had a had a sheet of 1x12 from Home Depot that was not flat (tried forcing flat as best as possible with clamps during cuts). I finally finished using up that piece and got a new piece that was flat as can be and still had issues.

So I finally had a chance to sit down and really test some things after reading many threads here. I clamped down some MDF and drew a sketch that had 3 circles of different depths (.100 .200 and .300) deep in each corner of the board. 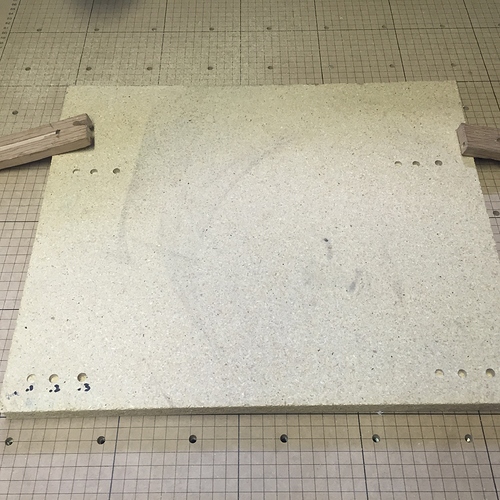 You can kind of see one lone black dot in the bottom left. That was home.

I took the spindle to the back right corner and zeroed the z onto a washer I had laying around and moved the spindle around the board and tried sliding the washer underneath at various spots and found that the wasteboard is definitely not flat. (Right side higher than left side. Right side is deep in the back, gets shallower, then deep again at the front. )

So the answer to my question I am pretty sure is to skim cut my board, right?

With that in mind, I am planning to do a few mods and in particular a new table (possible torsion box), dust shoe and y axis sitffening (x is done already). Since I am going to be doing those and possibly moving the spindle up and down to get the dust shoe fit just right, and the wasteboard may move or sit different on a new table and with supports securing it and the Y axis… I probably want to either A. Skim cut the board for now and then reskim it after doing those mods or B. Leave it as is until I finish the mods and then skim it?

Once again I am pretty sure I know the answers I will get but just seeking confirmation (I don’t want to skim off the nice Inventables grid lines =( but it seems necessary).

Is your wasteboard level? In relation to the spindle…not to the ground.

Sorry I accidentally posted before I was done typing the post. I edited it and think I addressed your question.

You could attack a sacrificial wasteboard on top of the nice one and level that one…that is what I did.

I made a video on how to do it, if you want something to think about. I also addressed a couple issues in the video, such as how to read the lines left by the large bit to determine if the spindle was truly square to the wasteboard. X-Carve Maintenance/Troubleshooting Videos - Add Your Own!

This has worked out well for me, even though I haven’t yet had the need to skim the 4 wasteboard pieces yet. If you need to do that, you probably want to screw them down (recess the screws!!) first, then when you’re done, make sure you mark the pieces as to where they go and their orientation.