I am using Easel with Arduino on a homebuilt CNC unit. So far I have had a lot of learning experiences (thats why I rolled my own) but also face a few problems. Mainly noise issues which I am in the process of dealing with.

My question is this, and I have tried to search for an answer withoutluck - can I input an offset value to the Z-axis?
Say I want a carve a total = -4mm but only do -2mm. Next carve I want to continue from -2mm to -4mm, same path to complete the job. Is this possible through Easel or is manually extend the bit height thus fooling Easel my only option?
Maybe there is a G-code command that cover this?

but if i’m right, you want to carve, a depth of 4mm in 2 pass
so Yes you can set a depht per pass at 2mm (in cut setings) 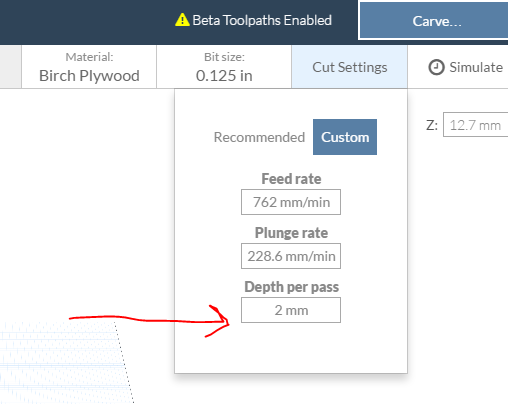 that’s what you wanted ?

@Rapahel:
No, that is not it

I want a 4mm deep, with shallow 0.1 or 0.2mm increments, carve but may want to do it as two jobs. Each depth change may be as little as 0.1mm (cutting alu) so to avoid a 2mm deep “air carve” before the last 2mm is cut. By setting an offset value to the Z-axis = -2 it would start at where it left of, slicing off 0.1mm per pass…

@Robert:
Adding it to Easel would suit me, but that might not warrant its existance

Easel is a no-cost, entry level interface which for me work just fine - and adding every conceavable feature out there would defeat its purpose. I get that.
At the moment I manually tweak the cut depth / depth per pass to achive this. Set cut per pass = 2.2 with a 2.4mm total depth = two passes of 0.2mm, readjust values and start again. Gets old real quick haha

I am on a Mac btw so I can not test Vectric products.

you can set your zero, and then, move to -2 set your “new” 0
but you will need to add 2mm to your safety height
like this it will not carve during aerial movement

Yes, I have used that workaround aswell

I wanted to know if there were any possibilities within Easel to set Z-offset so any previous milling could be accounted for including keeping safety height within set height. Would be less labour intensive and less likelihood of messing things up

As I understand it there is no Z-offset within Easel then. Fine, then I dont have to try locating it

Not sure I understand what you’re going for either. You can choose the overall depth of the cut in the design section of the screen, and the cut depth (pass depth) in the cut settings.

If you’re looking to make your first cut shallow to minimize fibers and such, I’d recommend starting with a shallow pass depth and letting it make a full cut, then cancelling and starting the job over again with the full pass depth. Using a sharp downcut bit (if wood) will usually minimize the fibers and reduce the amount of cleanup.

If you’re looking to make your final pass shallow just so it’s cleaner, just tweak your pass depth. For instance, if you want a 10mm pocket and want the final pass to be 0.5mm, make your pass depth 1.9mm instead of 2.0mm. That way it’ll make 5 full passes, then a final finishing pass.

I wanted to know if there is a Z-axis offset value that could be entered in Easel, to my knowledge there is none.

@RobertA_Rieke: I have done that workaround before and if the remaining passes are few then it is easy to do. The workload increase significantly when each pass is very shallow / quite a bit of depth yet to carve.

Overall depth of the cut is not an issue, nor is pass depth. I have those under control.
I´ll elaborate, example

Machine stop / halt ( or stopped by user) somewhere into the carve for whatever reason, say 1/4" into the material.
I now want to restart the carve, beginning where it stopped without running half the program before actually digging into any material. An offset function would take care of that. I know I can manually “cheat” Easel by shifting the end mill position relative to the collet, and adjust safety height accordingly. I know I also can manually enter pass depth = 1/4" to take up the slack, but then next pass would also be 1/4" which would would be way to aggressive.

An Z-offset would take care of the initial “slack”, continuing from a given depth with the much lesser, required pass depth, with a new recalculated safety height

Not that it helps with Easel, but Fusion360 has the capability to chain together operations so it knows what was previously carved and essentially the next operation doesn’t redo the first operation. For instance I’ve modeled some 1911 grips and have three chained operations with the first being roughing pocket clearing, then a finishing scallop operation for the profile and a final cut out pocket operation. Each operation is generated assuming that the one before it has been completed and it doesn’t recut what’s been cut.

Easel bring pretty basic, I doubt that it would have that capability. The only “for sure” way to trick it is to reset your Z zero position and set a much higher safety height under Machine -> Advanced.

You may also consider the two stage carve option where both bits are the same diameter. I don’t know if the logic behind those toolpaths subtracts from the Z or not but you can try it.

EDIT I did some quick checking and it does not subtract from the Z axis. You could export the Gcode, remove all of the code before the Z level you want then import the Gcode back which would skip the operations but would also have the initial zero position be the same.

Ah, gotcha. No way to do that in Easel without cheating the system, but it would be a nice addition.

Yeah it would, but I know that adding every bell & whistle would prevent Easel to be what its supposed to be - quick and easy. So I can relate with the R&D-team

Justin:
Fusion360 is installed but I have not had time to get familiar with it yet. Chaining operations would solve this this scenario. Also other CAM´s have ways to deal with this. I´ll look into the two-stage carve but if I have its grasped its logic it won’t help in this particular case.
Good tip on the edit of Gcode, deleting the carved portion of the job

Of course, when I have my machine all dialled in, design perfect and no interrupts occur it would render the need to offset Z entirely

Yes, this can be done. Let me describe two ways I have done it depending on the situation.

First of all, Easel doesn’t care where your cut is. It is all dependent upon the staring point, so your end depth will depend on that; not some setting in Easel.

Now, the way I do this with trays is to get my bit to a known height for the first cut. Starting with a flat and true piece of wood, I lower the bit until it is just about touching. Then I loosen the chuck and let the bit fall to rest on top of the work. I know this is true zero.

Next step is to make that cut. So say my stock is 1"and my cut is 1/4"; now I know I have 3/4 left. Since this is a pocket cut for a tray, and I typically work from center, I can set my bit at 3/4" using the same technique. Then I raise it to the starting point of my model before starting the rest of the carve. It works great.

Now, the other way is very similar, but better suited for when the starting point of my bit will not be cut to depth on the first cut. So starting with a flat and true piece of stock, I will zero my Z axis to a point not on the stock so it is a known value. So, I have 0 and I know my stock is 1", what then?

Well, I raise my bit 1.5", move it to the starting point, and drop down .5" so it now rests on the stock. Then, every cut after that is based off the same 0 point. I will zero the bit off to the side of the the stock, and then raise it by a known amount, move to center, and adjust Z accordingly.

Thank you all for your inputs, appreciated

My reasons are stated in first post, my system is not 95% reliable so it happen quite frequently that I need to restart a carve hence my question. I can cheat Easel but wanted to know if there was a software based solution available. There isnt, which is okay.
(My system is DIY so none of my issues reflect upon Inventables, system is Arduino/GRBL-based and Easel is used hence my post here)

All values of total depth is arbitrary, 2mm/4mm just given as an example.

Yes, I have done similar myself but can improve my workflow in regard to where I place my X/Y/Z zero. I have previously used a known X/Y position onto an uncarved area of the stock, but it then become difficult to cheat Easel since I can not reset Z below stock height. I should either make myself a Zero block or place the zero point outside stock perimeter at waste board zero.