Newbie here - still in the learning phase. I’ve managed to find creative work arounds for everything I’ve come up against so far, but this one still confuses me.

What triggers a raising of the z-axis in certain points of a cut out? For example, the machine runs the outline consistently but will (seemingly randomly) raise the bit on a specific area, preventing an entire cut through.

Is this the same reason that a seemingly consistent design - no visible variations in the cut line - will show up as small cut out spots in Easel until the depth of cut is adjusted past a certain point? Why would it do this if the cut line is solid and the depth uniform?

Any advice/links to explanations would be appreciated.

I can’t say why, but this is what I found frustrating about about Easel, it runs your toolpath all over the place for no reason and wastes time (I imagine). It is why I am trying to figure out Fusion 360 as it seems you can tell it what to cut when instead of putting all your blind trust in Easel. 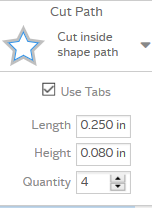 I’m seriously new to the CNC game, but I get this. One thing I already appreciate about Easel is that getting started is pretty straight forward and it is a good ‘playground/learn on your own’ system. I can see outgrowing it at some point though. I will say that it is also easy to make mistakes. I’ve already broken a couple of bits and even ruined a collet. Thankfully, I learned what I needed to learn and it shouldn’t happen again

Thank you Russell. About 30 minutes after I posted, my brain just clicked as to what that was and why it was happening. And thanks to your reply, I now also know the technical term for it and how to adjust it to my liking.

Thanks for not doing the ‘that’s a stupid question’ thing

People for the most part are nice on this forum and don’t overreact when someone ask a question, we were all newbies when we started.