I have some problems with my Z-axis and the spindle for the Dewalt 611.

Second, on one of my first carve attempts after completing the assembling of my X-carve, the Z-axis v-wheels actually fell off in the middle of the carve! Thought about using something like locktite to keep the nuts in place. But that seems to kind of defeat the purpose using the eccentric nuts to adjust the tension of the v-wheels against the Z-axis makerslide. So what to do?

Note/complaint AND solution: The three screws on the spindle mount that hold the Dewalt 611 are too short and the threads strip too easily. Solved that problem by replacing them with longer M3 screws (12 mm I think) and corresponding nylon nuts. This way the threads in the holes in the spindle mount aren’t necessary at all.

If you got tool-set from inventables the keys that come with it have rounded end on them so they allow you to insert them into socket at an slight angle about I would say 30 degrees, that is the only one I was able to use to adjust X wheels.
Do yourself a solid and replace Eccentric nuts with Eccentric spacers and use locktite on the nuts. Pretty much the only way I can keep them things in place and I believe most of the people around here went this direction.
Also have a look if you have play in berings inside x-carve wheels as we found out that the washer provided has not been correct size, search forums for correct size needed.

If you search the forums, you can find where people have redone their V-wheel setups using various parts. I replaced the standard bolts with hex head bolts on the X and Z axis, and on the X axis I also added nuts against the eccentric nuts to help lock them in place. And, of course, I used blue loc-tite on all of them. 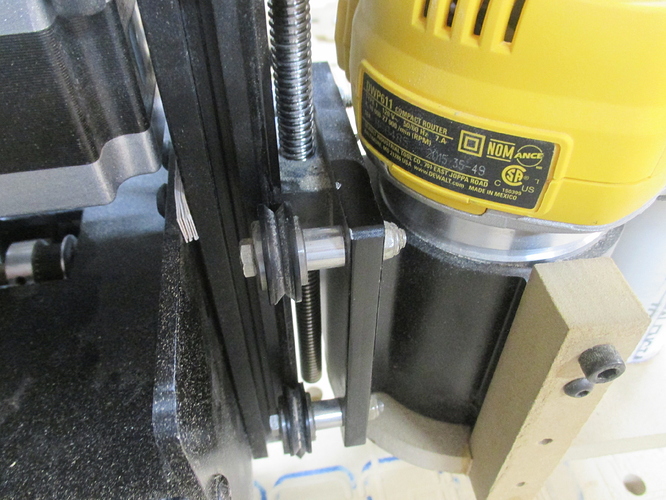 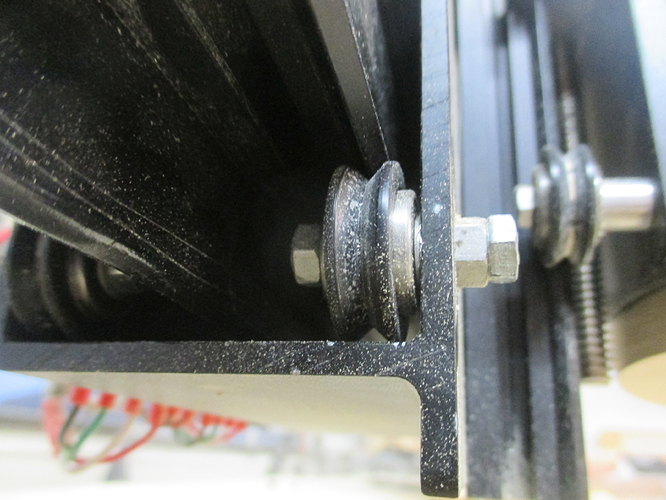 I cut down a hex wrench just for that purpose. Just take a little bit and it slips right in. I also replaced my eccentric nuts with Eccentric spacers and moved them to the inside. The Eccentric spacer is 6 mm I added a 3mm spacer (to replace the 9mm spacer) and it works great. Also 2 of my wheels had developed a clicking sound. I took them apart and found the 1mm spacers inside were actually 1.19mm. It wouldn’t let the bearings seat all the way. Replaced them with a 1mm and their good. I actually used the larger 1.19 spacer on the outside so my M5 nut wouldn’t bury inside the larger hole.

Just a curiosity, What is the speed dial you’re using on your Dewalt.?? Usually makes vibration if you’re on high speed.
I’ve been never used over 3 and have no vibration problems. Besides eats brushes very quickly on high speed. If make cents.

I had been using it set at 4. I will lower it as you suggest and see what happens.

I got the tool kit from Inventables. But the space between the x-carriage and the screws that hold the Z-axis spindle on is just not large enough to get the tool into the screw head. Thought about trying to cut the hex wrench but decided against it because I don’t have the right tools to cut it precisely and because I thought I might still need it intact for adjusting other parts of the machine.