I’ve just rebuilt my very early 500x500 model into a wide 750x500 one, with the new controller, and a misumi tslot bed. Went a breeze, and i rebuilt my enclosure around it to keep it clean !

Whilst rebuilding, I just noticed that the top plate holding the z motor is really warped. Probably explains the weird noise I was starting to get at the bottom range of the Z movement

Any thoughts, guys and gal’s ?? It wasn’t like this when I built it. 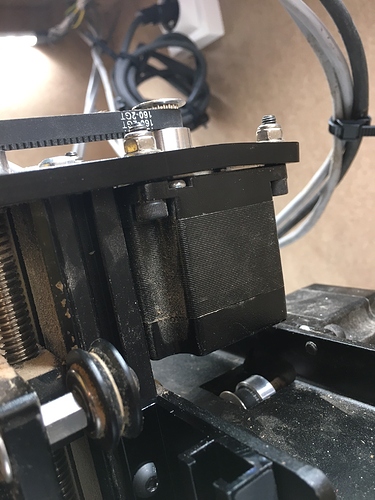 by the way, pics of the rebuilt and workspace !! Still work in progress, I still have to run the dust boot tube to the vacuum hidden in the cupboard, put the sound proofing in, and finish organizing the drawers… but it carves ! 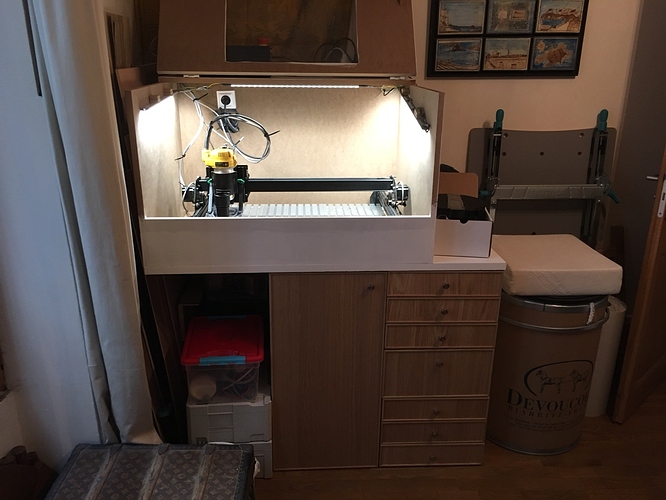 not only that but the only way force could be applied in that area is with the screws that tighten down the motor to the plate. this should have only been caused by not having the motor flush with the mount when tightening or something in the mount obstructing it from being flush before tightening.
either way when the mounting bolts were drawn down there was something holding the bracket up off of the motor and then force of the screws bent it.

on a positive note, that also means that this is not a problem. you can straighten the bracket or leave it bent. it is not a pressure point that should effect your machine.

you’re probably right, it must have been there from the start, and I didn’t notice it, so eager I must have been to play with my new toy !! I got mine around the same time as the old 2015 post you’ve unearthed, probably a bad batch ! I’ll signal it to the investable team if they have a plate lying around somewhere… a bitch to replace, but should help my squeaky noise.

thanks for the help

I would suggest straightening the plate as it maybe causing mis-alignment of the pulleys. The belt looks to be riding low on the pulley and that could reduce belt life.

When I ordered mine last summer, my first Z plate was bent as well. I had mine mounted upside down on my Z axis originally and even tightening the motor down didn’t straighten it out. Inventables replaced mine as well but that was within the first few months of purchasing.

on the 2015 x-carve the pulley is aligned with the set screw. just loosen the set screw and move the pulley up or down as needed to get the belt to run true in the middle.
My point was that this was not a pressure point on the machine, it is just a mounting bracket that secures the motor in place.

This should be straightened or the holes closest the makerslide should be shimmed to make sure the motor is flat relative to the mounting plate.

That is what I was referring to, the angle. It is like they are toed out.

Sorry sir, your correct. I Failed to mention i was expounding on the idea that @MarkA.Bachman mentioned earlier.

sure, robert… if i had to pay for the plate. Let’s see what the fine folks at inventable say about that ! if they feel it’s not a warranty included problem, ill look into it, but as I do mainly wood, i feel the linear z is a bit of overkill. I’d rather change my dewalt for a nice vfd