Is the Home Machine position consistent? Then is the jog function as well?
ideally id like to build referenced fences or other alignment rigs off of such, so I can square up and locate a part.
Mount a 90 deg fence, home machine, jog say 3" X, and 3" Y. and have that land in the corner of my “fence”.

HOWEVER I encourage you to check out OpenBuilds Control. At the bottom of the Position Datum display are buttons for Saving those Jig Positions. This is referred to a G28 (jig #1) and G30 (Jig #2) and you can actually save the position as an offset from home. So after saving it (using buttons in that same area) you would going forward simply home, then click the “Go to G28” and it’ll move into the saved position, no manual jogging. Then you can set X & Y zeros. Then move it into position to Probe Z (Or paper method) and set Z zero, then run the carve. It makes the setup quicker and less manual effort to remember the offset distance since it’s saved onto a chip inside the cnc controller. which remains saved until the user over writes it by saving a new jig position over the prior one. 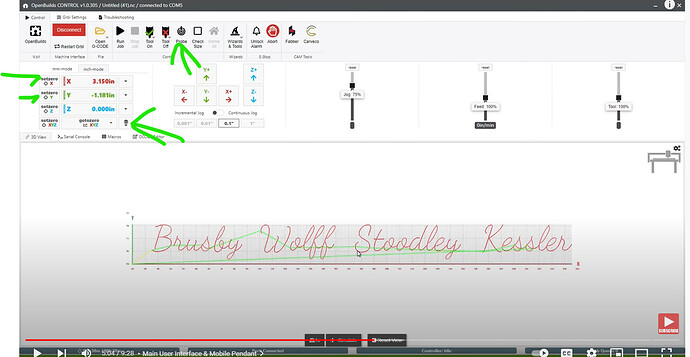 Hey Seth, that’s pretty much what I figured, thanks for the confirmation!

OpenBuilds, that’s exactly what I’m after. But I can’t get it to connect to my XCP, as I have the new firmware issue.

Ah, i think you can just go into device manger>Ports and edit the baud rate in there to 115,200… BUT im not positive thisll work.

yea i reached out to support, reluctant at first to provide a previous firmware, but then did, however it didn’t help. Openbuilds still wont see the XCP.

You dont happen to have easel open at the same time, do you?

Easel grabs the usb port and will not release it unless the easel tab is closed, then you can connect on openbuilds and reopen easel once openbuilds has control…

Not sure of this is the actual issue, but figured id explain it instead of the back and forth q&a…

If that isnt the issue, does the usb port show in openbuilds ?
If so what is displayed whe you try to connect?
If not then what is shown in device manager under the “ports” section? You may want to check the port properties and ensure its got the 115,200 baud rate and is set to a com port number 4 or higher… sometimes windows wants to rwserve 1-3 for peripheral devices and doesnt like it when the cnc is on one of those ones.

Nope Easel is closed
The port shows up, however gives same response to either firmware.
Im on a Mac, so dont have those settings 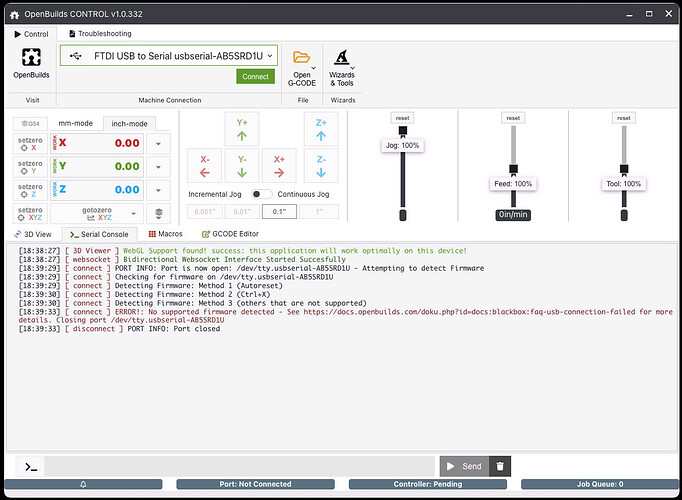 Ohhhh, fresh information… It’s a Mac… there are Mac’s with certain chipsets that simply don’t communicate well with usb devices. This may be one of those isntances. Unfortunately I’m not a Mac guy and don’t know more details than that. I would post this issue over to the OpenBuilds Control forum as well and they (Alex C) will probably have a good answer to either resolve or explain the cause and if there is not a work around, they’ll clarify that…

So switched to a windows machine, got her workin. had to set the port to 115200 in Windows Dev Manager.

Thanks for the assistive neuron smashing!

OpenBuilds is pretty sweet so far, thanks again for the help.

Bonus question, is there a way to implement their XYZ Probing puck in this configuration, notice it has some additional leads?

The XYZ Puck COULD be used with only 2 leads. the additional wires are for the LED to light up when the bit touches, more of a visual thing than something the CNC or software actually needs… I actually have a cheap XYZ block from Ebay that was like $40 with only 2 wires one on the block and the other goes right to the bit. Than setup as “other XYZ probe” in the openbuilds probe wizard

Id still be curious what they (openbuilds peeps) say to get a mac working with xcp. My subscription is up with easel pro so I’ve been exploring using fusion 360 for toolpath generation and would like to explore other controlling program options.

So the only Issue I’m aware of is that one of the more recent updates to the XCP firmware changed the baud rate from 115,200 (grbl standard) to 5,600, a much slower data transfer rate.
Because there is no record of changes we (users) don’t have an explanation as to why they did this. BUT at least a handful of XCP owners have contacted Inventables tech support to have them provide the older Firmware in order to put their machine back to 115,200 in order to use OpenBuilds, which only supports the 115,200 baud rate.

So long as your firmware is the one with 115,200 baud rate than it should work perfectly fine with OpenBuilds Control.

I just bought the XYZ probe from OpenBuilds, and as I was putting it together I noticed the extra wires. That was my first oops moment. The baud rate is now my second. Looks like there is no point in trying to figure out how to attach the probe since I can’t use OpenBuilds anyway. Bummer. Maybe they’ll change it back.

The extra wires are for a LED that only hooks up properly to the openbuilds black box.
The function of the xyz probe will still work though.
And if the baud rate is corrected you can use openbuilds control and that xyz probe. Personally i use the cheapest xyz i could get, about $40 on aliexpress