What bit would anyone recommend to do a full depth cut? and supplier do you recommend?. I have both the 1/8" and 1/4" Precision Collet. I would guess it would need to be a 2" cut length.

That would depend upon the diameter of the bit. As you get really deep it gets harder to clear out the cut material. I would go up spiral rather than straight or down spiral. Also, if the bit is thin, as you make the early cuts, you are putting a tremendous lever force on the bit between its tip and where it enters the collet. I had such a project and snapped bit after bit at the collet. If your design permits, you might consider doing it two sided. That would mean that you only have to cut half way through.

Are you saying you want to full depth cut in one pass?

I recently bought this bit but I still do multiple passes to get the cut. 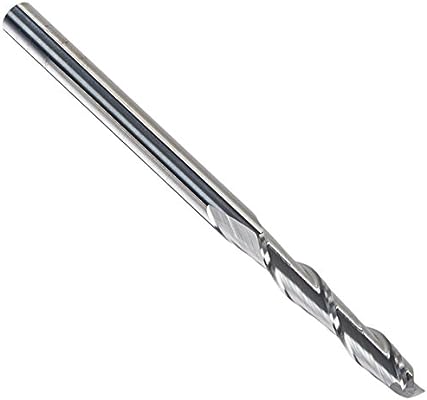 That’s the one I have and linked to. I just bought directly from Kodiak and not amazon.

Haha… I thought it was a different one. What was price shipped?

If you snapped those bits like that, sounds like you were running too aggressive on the DOC and IPM.

Plenty of bits out there for cutting that deep. Tools today is where I’d start.

Bit was $18, free shipping because I bought a few other bits with it.

They sell all of their bits on Amazon usually at around a 30% premium. I’ve spent more with them on bits than I’m willing to admit.

Good to know! Typically I see prices are about the same once shipping is included but I will order from them if its lower.

The bit was a 1/8" shank, 3/4" length of cut and a 2mm cutting diameter. It worked well through most of the material (white oak) but any grain variation and pop!. Since then I have moved to using a 3/32" cutting diameter (2.4mm) carbide straight double flute. It can’t quite cut all the way through the material but the design is symmetric so you can use the same tool path after you flip it provided you keep registration by using locator pins.

Another thing you can do with with extremely thin bits is to make fewer and deeper passes moving much more slowly. To do that, you have to really depend upon the bits material clearing abilities. If the flutes clog, it stops cutting and the forces will quickly build up.

nope
multiple passes, one pass would break the bit surely

Check out my “Fruit Bowl” project. You can see that I’m going for a thin cut like a scroll saw might make. I can use larger diameter bits, but it cuts into my finished project and turns my expensive material into expensive saw dust.

Some good options here thanks everyone!

One suggestion is something I learned the hard way. My goto bits are 1/4" downcut spirals which I’ll try to use whenever I can. I regularly cut seriously hard Aussie hardwoods and finally came up with a way to speed things up.

Irrespective of what you’ve got your stepover rate set at, the very first cut the tool makes, it needs to cut the full-width of the bit (even with ramping your cuts). Once this initial cut is made, subsequent cuts will then only need to cut material at whatever you’ve set as your stepover (i.e. if you’ve set it at 50%, the tool is only cutting 50% of its diameter or width).

If you make the job into two separate toolpaths however, you can save a lot of time.

First toolpath; using a moderately conservative feedrate and depth of cut. Make a cut down to the full depth, just a little wider than the bit. Second toolpath then completes the cut, using a far more aggressive feedrate and DOC (even if you’re “cutting air” for the first few passes). Doing the job in two stages like this, can reduce your overall cut times significantly. It also puts far less stress on your machine.

The actual feeds, speed and DOC’s you choose to use and will come with experience, but don’t be too conservative (within reason). A tool spinning needlessly without being able to cut can rapidly take the edge off it, and without being crazy, if you get things right, much of the heat generated in an aggressive cut can be carried away by the swarf (bits of metal, wood etc coming off the bit).