I bought some 2 color acrylic from Inventables and had trouble getting a quality laser etch.

I want to make some office signs for a small business and they have to look good. I bought three different colors and had the same problem with each. You can see in the image that the edge of the S is not perfect. When viewed in real life the real problem is the upper left flattening of the top curve of the S and both edges of the bit of the lower curve that is transitioning to the middle of the S. 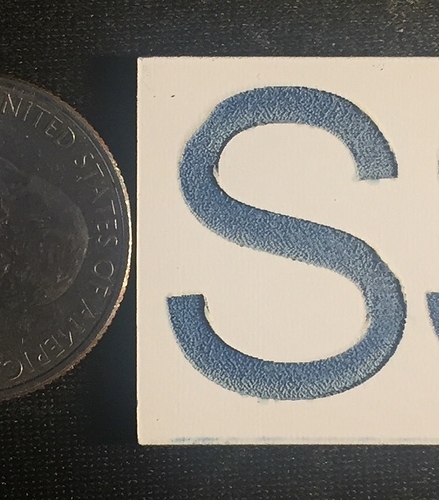 Here is a bigger letter on a different material. Issues in the same areas. 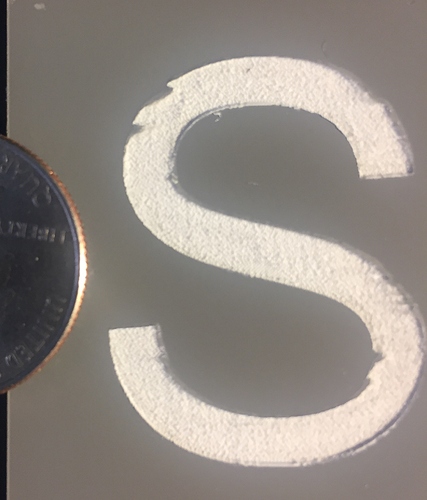 We tried a range of power and speed settings. We tried etching twice at lower power. We tried higher and lower DPI. Higher power seemed too much as the back would melt. Lower power left these weird artifacts around the same area that has problems in the one shown above. 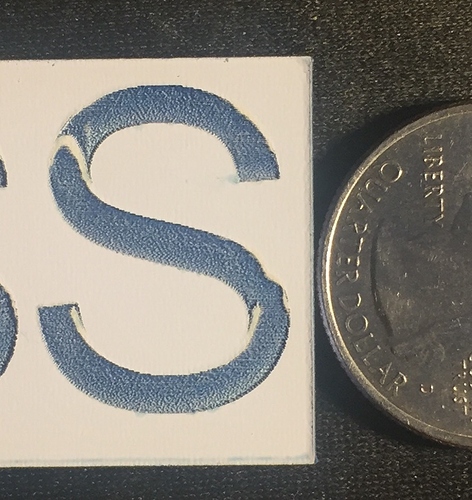 We tried both a 45 watt and 60 watt laser - same problem. We always left the protective plastic film on the top to avoid depositing ablated residue on the good areas of the part. We tried different fonts, same problem. We also tried rotating the letter 180 degrees in our software, problem happened in the same areas - the problem areas did not follow the rotation of the image.

We are out of ideas on what to try. The material says it is laserable, but we had no luck in two hours of experimentation. I’d enjoy any ideas the community might have.

What’s your ventilation like? Good airflow to remove vapors?

Yes, I believe the air flow is good. The laser is ducted and has internal fans. There is also an air stream pointed right on the laser focus area. In fact, I’ve been wondering if the airflow could be causing premature cooling; one idea I’ve had is to turn off the on laser air stream.

Hadn’t thought of over-cooling. You don’t need much airflow to keep vapors clear.