I’ve been reading and getting a lot of tips from here and it has been really helpful in getting a great X-carve experience! Thought I would contribute with something myself for once

I have seen some different ways to raise the Dewalt and still access the yellow locking button but I have not seen this one so I thought I would share it.

So I started off by removing the router from the mount and screwed an M4 countersunk screw all the way in the lower tapped hole on the inside of the mount. I inserted the screw from the inside so that I would have a larger surface pressing on the dewalt lock button. (I tried from the outside first but found that the smaller and sharper screw surface will damage the button)
A countersunk screw was chosen because it was the only one that would allow the router to slide back in 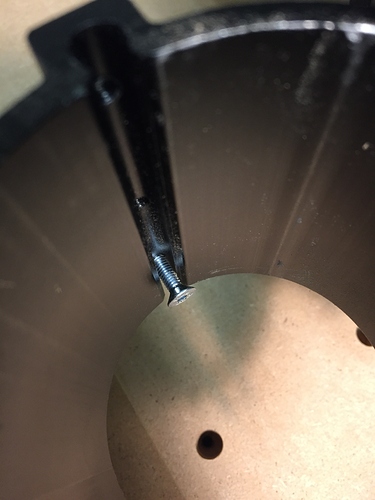 I then slid the router back into its place with the yellow button facing the screw holes on the side.
Take care to align the button just behind the screw head, the router should just be barely sticking out below the mount. Tighten the router mount again when everything is in position. 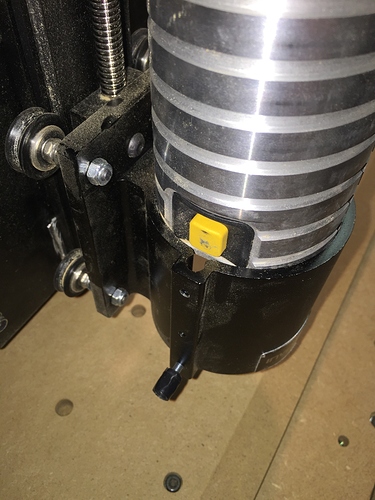 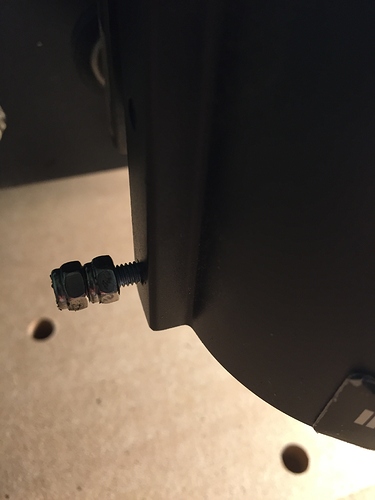 Now it’s done! Use your fingers to unscrew the screw all the way out again to release the lock. Now you have 2 definite positions where the spindle is either locked or unlocked and one hand free to do other things while changing tools.

I used some tape on the nuts for grip but will find or make a knob to replace it.

Also: Remember to unlock the spindle before you start carving! 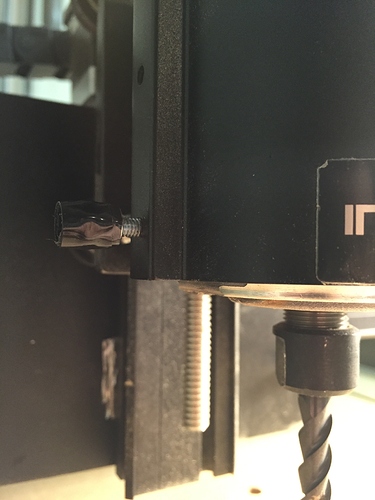 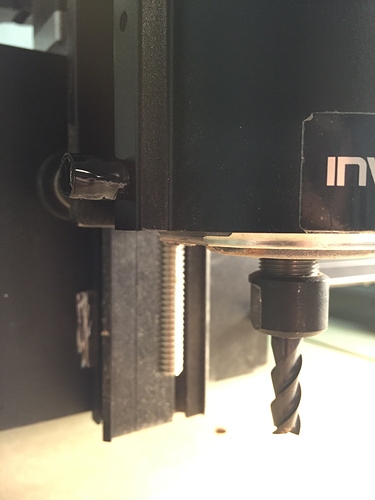 Sounds like a great idea until you forget to loosen the screw completely before power is applied. That will do some damage.

yep i will be afraid too to forget to unscrew the m4, but if you let the spindle go down a little more you will be able to push manualy on the yellow button

This is an excellent workaround! When I first got my Dewalt, after having used the stock spindle for a few months, it took a little while to get used to the juggling act that you have to do to hold the lock button and get the wrench lined up right. As others have said though, this is a little dangerous because you might forget to unlock the spindle before starting a carve. Perhaps, you could paint the screw threads with bright yellow or orange paint, so that it’s obvious whether it’s screwed in or out. I don’t know how long that would last though.

After a while using the spindle I figured out a good way to change bits pretty quickly. Everyone’s method is a little different, but mine was to get the wrench lined up on the nut first, then push the button while turning until the button “catches.”

Might remove the threads as suggested by Robert and then add a spring to the outside so the screw always allows the button to return to normal position.

I like the idea you have going here. I might do the same thing with a minor change or two. I’d go with how you have the flat head screw on the button, but I’d use a spring on the other side with an acorn nut or something similar to retain the spring. that way you won’t need to screw in anything, just using it as an extension to the button.

I have been using an allen head wrench/hex key to hit the button through the bottom hole. The two smaller keys I needed in order to assemble and adjust my X Carve fit through the M4 hole. I think they are 2.5MM and 3MM, but I don’t recall. I haven’t damaged the threads enough yet that I a screw won’t thread in, and it has been easy enough for me to push the button. The hex keys are long enough that I can use the short part of the “L” of the hex key and push with my palm. If the X Carve is on, the motors have enough holding force that the spindle doesn’t run away from me while pressing on the side with one hand and a wrench on the collet with the other.
If someone crafts a spring-loaded ‘button’ for this, I’d be game to try it.