Getting ready to pull the plug on buying a laser. Whatever I buy I want it to last me a while so a small laser is out of the question. Searching the marketplace I came across this 30 watt laser; 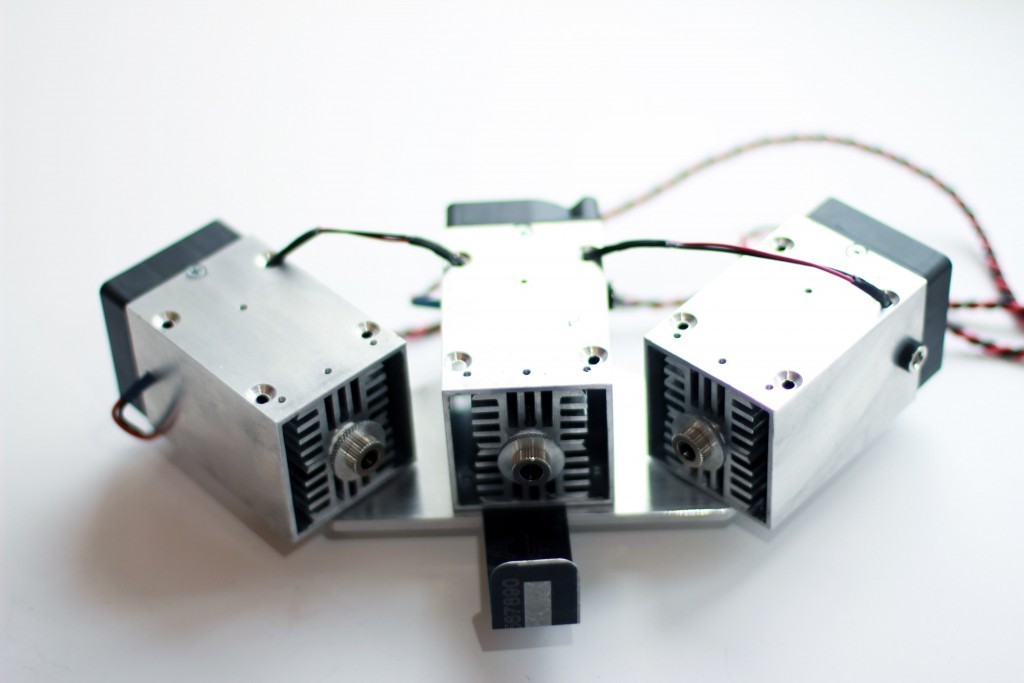 Should easily engrave/cut on leather, acrylic, fabric, plastic, plywood, wood, steel, stainless steel, glass, PVC, copper & brass. My only question on their setup is how long it would stay in focus. It looks very well made so maybe that wouldn’t be an issue. On the plus side I really like their design for the drivers, and I would think this laser system would last longer than a single beam laser, since each laser is only putting out 1/3rd the power (properly focused). Any thoughts?

I like the idea, but the convergence of the lasers would be my concern. Even though you see a one spot at the top, once it cuts through it will continue on that angle. Maybe not an issue for 3mm stock. On larger stock you may notice the difference (angles).

Now that I think about it, since the focus is at the top will the laser beams split as they go lower into the material? Does Endurance compensate for his somehow?

Cut some materials, but not steel. Etching with a marking solution would be your only option. And, I would steer clear of PVC.

While you control the power, 1/3 is only when you are using a 1/3 of the power (per laser) At full power it is full power for all three. Unless I’m missing something.

Does Endurance compensate for his somehow?

That’s a good question. I will research this and find out.

Is there a lens system that refracts the beams, so they all go straight down, or nearly so?

I use to build industrial cnc lasers and routers and this setup would be ok for engraving but cutting through materials will be sharp on top and blown out at the bottom.

In theory if they tried to rotate them horizontally and hit an industrial mirror to turn the beam vertically the two angled ones will still distort beyond the mirror if the focal point is at the mirror.

We used 200 watt slab lasers mounted at the back of the machine and then a mirror on the X and Y along with a focal lens on the Z axis to fine tune to all material self adjusting with a proxy sensor setup so the gantry wasn’t carrying alot of weight and go faster but it needed bellows on the X & Y for dust reduction and safety.

Dual diode setup in 2013 by the late Jeff Woodcock.

This is a dual 2.5W (5W) 445nm laser diode engraver me and my son built. The two beams intersect to the same focal point which makes the burning power very intense. The focal spot we are able to get is only .004"-.005" in diameter. This engraving was done with a .004" Pixel Resolution running at a feedrate of 225 inches per minute with 1/2 power on Birch Plywood. This CNC router is a 4 axis DC servo system using Gecko G320’s These two Laser Diodes are driven by an analog modulated driver which varies the power based on 8bit shading of the photo. The driver’s analog modulation voltage is varied by a US Digital MA3 shaft encoder timing belted to the 4th axis DC servo motor. We are able to change power levels of the laser diode by changing the steps in Motor Tuning within Mach3. The engraved image is 9" X 7.2" and took 1 hour, 35 minutes to complete. The image to Gcode program we prefer and use for this photo laser engraving process is PicEngrave Pro 4 Plus Laser. http://www.picengrave.com/ And yes, our Laser Shoe fume extraction setup is a small block Chevy thermostat housing. It’s small enough to be able see the progress of our engravings. We use it with our rotary spindle for dust extraction also. Works great!

The metal “engraving” they show seems somewhat misleading to me. Everything is coated so really they are only removing the coating, not etching the metal. I would be very skeptical of any diode laser an average joe can get a hold of being able to etch any metal, let alone steel.

What I like best about them is that they have advanced laser drivers with digital readouts, and they use an advanced TEC cooling system, which I was going to build myself for whatever laser I bought, but now I don’t have to. I spoke with someone there and they said they are working on a prism lens system for the two and three laser system. For my first laser system the two and three laser system is probably a bit too much for me, but I am certainly interested in their 10+ watt system, as well as the JTech 7 watt system.