In many threads on this forum, many fine artists have talked about 3D printing their own parts and modifications. I am curious as to what brand/model 3D printers people here are using.

One of @BartDring’s creations - an Ord Hadron.
Currently in need of some TLC so I can print a dust shoe.

I have an XYZprinter from Barnes &Noble ($350). It is Very basic. There are much better units available. I just got this one dirt cheap ($225 Xmas special). Currently it only runs PLA, but I hear there are individuals figuring out how to hack the machine. The filament is DRM protected, which is a pain, but that is one of the hacks being worked on.

My next machine will be a DIY build.

I started a DIY build, then shelved it when I saw the DaVinci 1.0A on sale for $399. Damn fine unit for what I do.

There is some good info at this thread

You can already buy ~90% of what you need to build a 3D printer from the Inventable's store.. Extrusions for the frame NEMA Motors (2 for Y, 1 for X, 1 for Z) GT2 belts Motor Brackets Bearings, couplers, pulleys. Arduino Power Supply Nuts, bolts.. etc All that's missing is some smooth rods, heat bead, ramps 1.4 board and some type of hot-end. The trick would be to build something BETTER then your standard i3 Prusa (google 'Folger Tech 2020 i3' to see an i3 built using Aluminum Extrusion a…

In the process of putting together my E3D BigBox

Modded MendelMax 2, mostly Kisslicer for slicing but I give Slic3r a shot now and again, Solidworks for design. Been wanting to try out Simplify3D but the $150 and the fact that Kiss just works right and fast makes me a little hesitant.

I will add: OnShape (and occasionally fusion360) for modeling and Simplify3D for slicing…

…and you can use the X-Carve to create an enclosure! 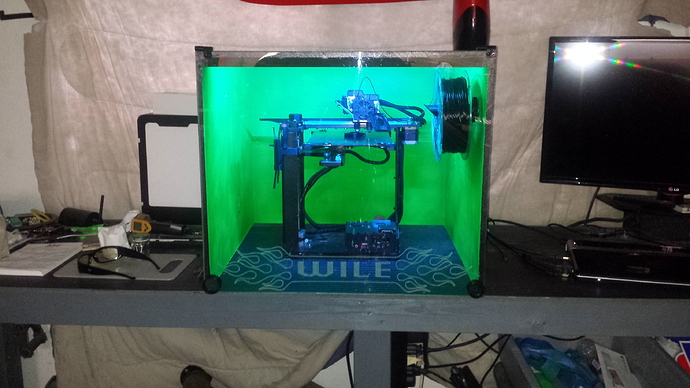 If your going to buy a 3D printer… don’t buy a closed system. Don’t buy from a company that forces you to use their filament or software.

An open source printer ~$300 (from parts, kit or pre-built) is capable of printing as good (if not better) then a $3000US Makerbot (Don’t buy Makerbot! Makerbot is evil)

There are TONS of options out there… just find something that has a heated bed (for ABS), extruder that can handle flexible filaments, a large print size, and can be easily accessed/repaired/modified.

Actually, I was leaning towards an XYZ Da Vinci All In One scanner/3D printer.

Pretty sure that the scanner is junk (I bought an Atlas scanner via Kickstarter), but the printer should be fine. As stated, just beware about the closed-ecosystem in terms of their filament. I’m fine with it as it works for me.

I would hope Inventables would add a 3D printer option similar to what the Piranha FX has. Is that option coming to X-Carve?