Yes I seen to remember some one talking about that problem on another forum. good to hear the 540 is OK would be a long wait for you to get it repaired.

I posted a question to the linuxcnc forums and someone confirmed your suspicion, any slaving of axes is not used for testing.
The G540 is a beast with the X-Carve. I can make the X and Y axis move at frightening speeds! Must get those stop switches sorted out before I break something…

I neglected to add captive nuts for the home switches when I assembled the X-Carve so I’m going pull things apart to do that this evening. (I don’t have any post assembly nuts in case anyone was wondering why I’m doing this.)
Plan is to insert 2 nuts into both the rear X MS and the left Y MS. Second nut is in case I decide to add limit switches as some future point.
Does the MS orientation on the Y axis make any difference in how the home switch stop screw contacts the home switch? As the moment, the single t-slot on the out side of the MS is at the top. I remember seeing something about making sure that this slot was upper most on the X axis but can’t find anything about it being necessary on the Y axis.
Hope that last paragraph makes sense.

Looking through the assembly instructions and a few users’ build photos, it seems that the single slot is at the top for the X axis and at the bottom for the Y axis. I have the Y axis upside down

Just as well I have to take the damn thing apart anyway!
I’m going to add a couple of captive nuts so I can add true limit switches as well. (see this thread Where to locate limit switches?)

Well removing/reversing the Y and X Makerslides wasn’t that bad at all. I’ve added two captive nuts so I can add a limit switch as some point. I was planning to remove the Y plate and X carriage so I could drill it for an additional microsiwtch but as my stepper motor wiring is soldered to plugs for the Gecko G540, it all got too hard. Perhaps when I pull it apart again to do the X axis stiffening mod.
A quick test under Linuxcnc shows that the home switches are now recognised.
No I’m ready to do some alignment and tuning. If I get the z axis plate machined tomorrow, I’ll soon be making sawdust!

No machining today, I decided to finish off the stand for X-Carve and do the machining tomorrow after I clean up the sawdust.
Frame is 90x35 MGP10 pine studs, the legs are 90x45. There’s another frame that will go at the bottom of the legs and have castors mounted on it. There will be a shelf on the bottom frame.
The torsion box top is what the frame/legs are sitting on, it’s a bit more visible ion the second shot. 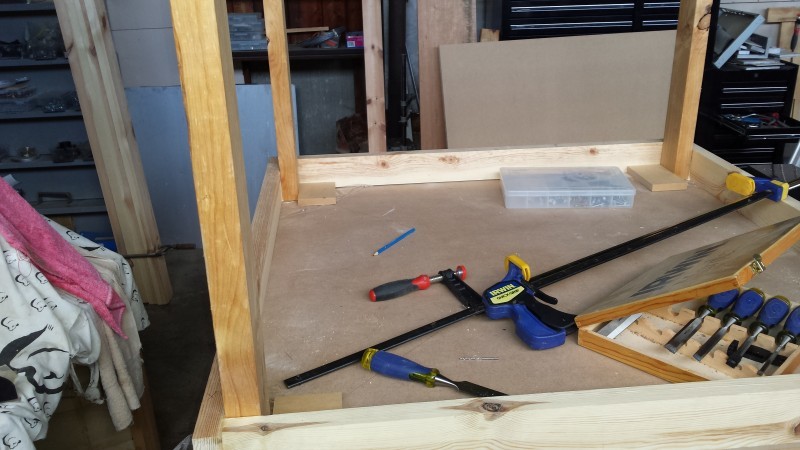 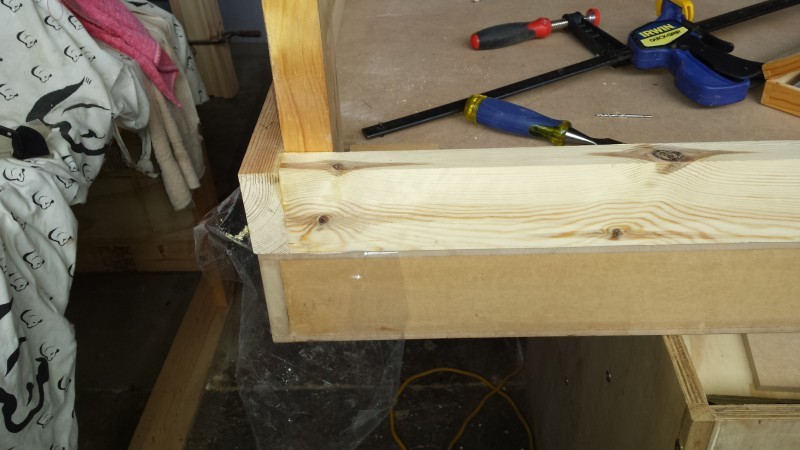 Here’s a shot of a finished bench for the 6040 CNC router. It also has a torsion box top. 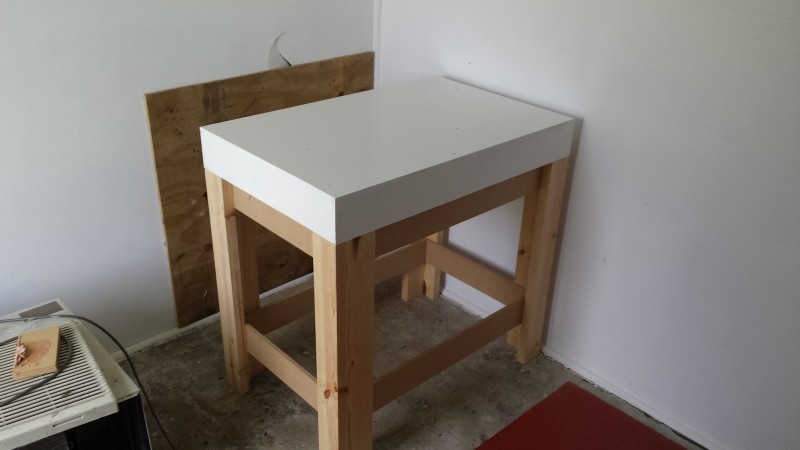 A couple more images of the finished bench. Castors added although I doubt I’ll be moving it around much.
I gave the stand and the base of the torsion box, a couple of coats of polyurethane. The top of the box is still the wax that I coated it with when making it (stops the glue from sticking). I don’t think it’s worth trying to remove this.
I still have to cut a shelf for the lower rail but I’ve had enough woodworking for now. 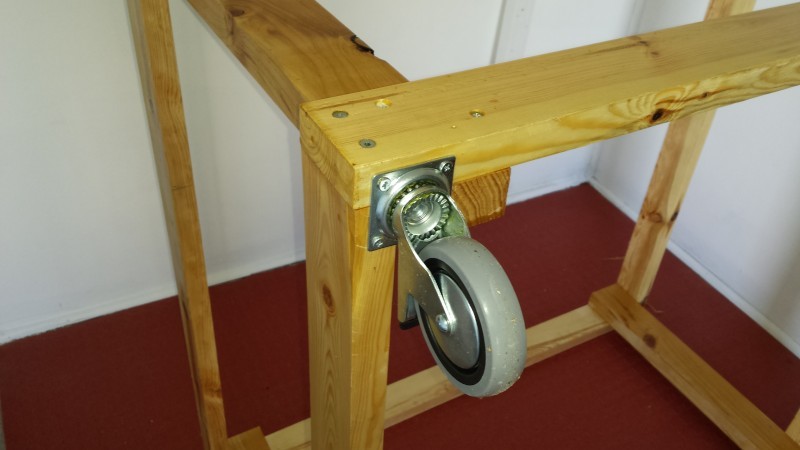 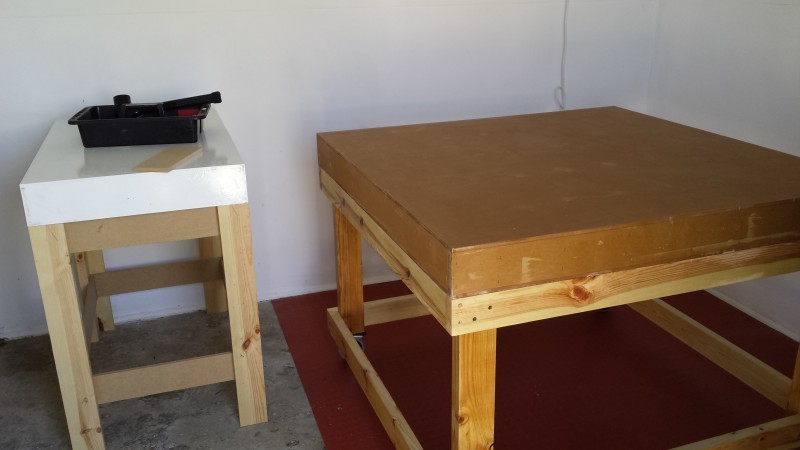 The router mount is almost finished. Plate is a standard wheel carriage plate from Inventables (25200-01), cut to length with slots milled for the bolts from the router mount. I still need to make a 3mm spacer to clear the screws that mount the plate to the delrin nut. Getting closer though.
Here’s the parts. 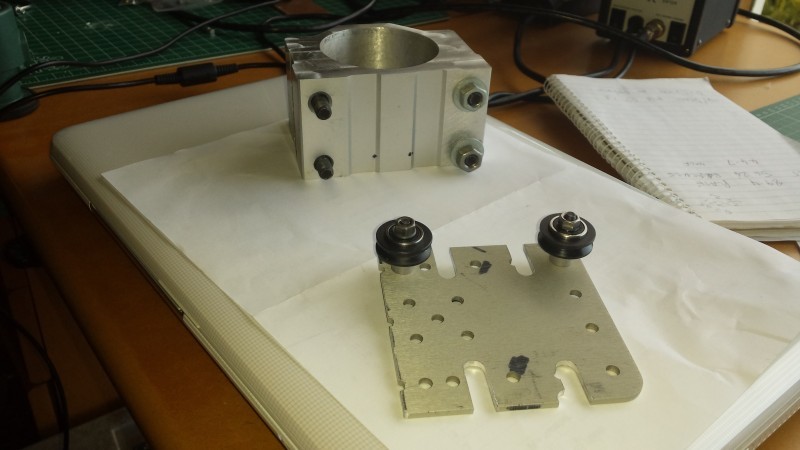 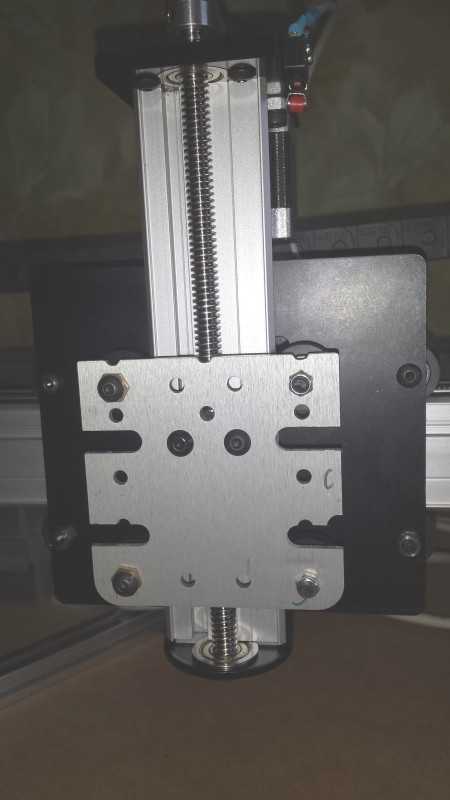 Here it is mounted. 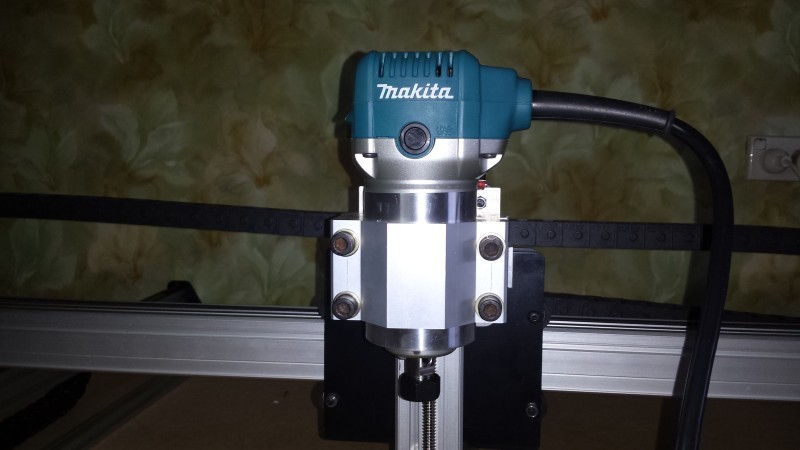 Success at last!
After some head scratching over the homing configuration for Linuxcnc, I managed to get some values that are accepted and was able to successfully perform a homing sequence - well partly successfully, the cheap micro-switch I used on the Z axis managed to fall apart (the actuator arm came off) and the carriage crushed the switch. A few minutes with a soldering iron fixed that.
I still need to sort out some acceptable feeds, which I’m happy to do now I can be sure it will stop when the home switches activate. There’s an annoying buzzing from the Y axis which sound like resonance rather than motor noise but that’s a job for tomorrow. I’ve also found the the plate I used for the Z axis is too short. If I enter in 65mm as the travel distance, the bit is too far from the table. I can put an actuator extension so the carriage can sit lower down but still activate the micro-switch at the top of the travel or make a new plate, another tomorrow job.

If it wasn’t so cold, I’d shout myself a beer. Have to settle for coffee instead - but with a chocolate biscuit. 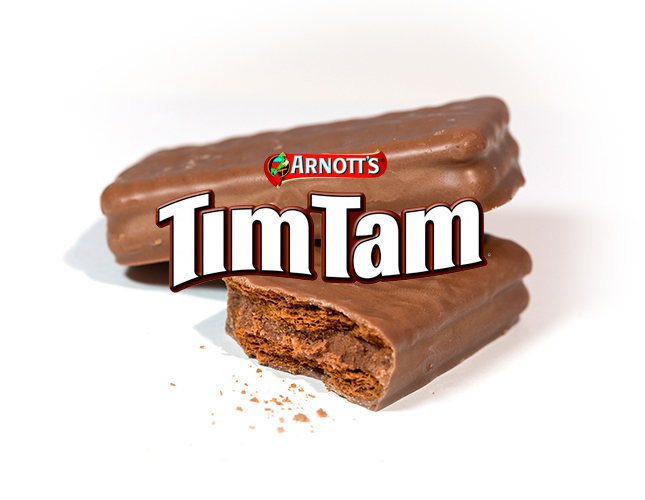 Too cold for beer? Does not compute

After spending what seemed like hours making the spoil board, it turned out it wasn’t too cold for a beer after all. Drilling, countersinking and threading 144 little holes, I deserved a treat!
I wish there was some tool to do this sort of boring work for you, say some sort of computer controlled routing device … 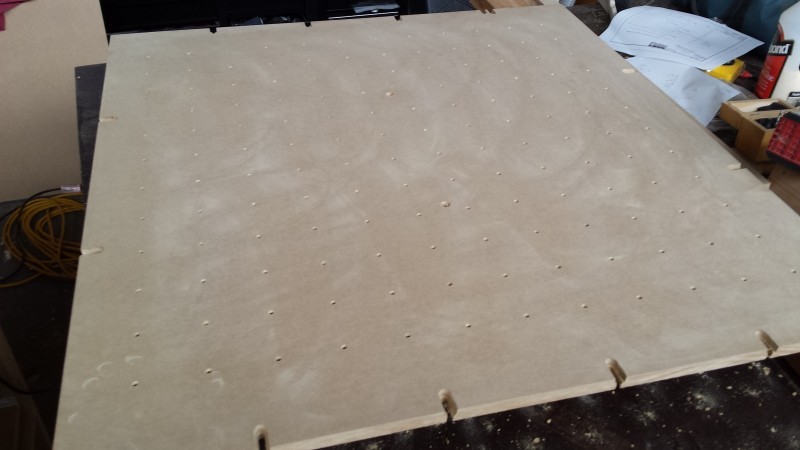 After a bit of tuning, here’s a video of rapid movement on the XYZ-Carve.

Disaster!
I’ve got the spoil board and extrusions assembled on the torsion box bench and I’m trying to align the X-Carve Y and X rails. The right hand Y carriage is about 1cm closer to the front plate than on the left side. After much tightening and loosening of allen screws, I put an engineers square on the Y plate to measure how square the Y plate was to the Makerslide and it isn’t - square that is!

This could happen if I had debris from the tapping of the makerslide caught between the plate and the end of the Makerslide but I was careful to de-burr the tapped holes and clean up afterwards.
Could it be that the two X axis makerslides are different lengths? I checked the other 4 pieces of Makerslide that were bought from the same supplier at the same time and found that the length varied by up to 1.5mm over 1 metre.
A bit more measuring showed that the right hand Y plate is not vertical to the table surface which could indicate that ends of the makerslide were not cut at 90°.(EDIT: Just checked the spare pieces and they are not cut at exactly 90°)

I’d love someone to tell me that it doesn’t matter if things are out of whack a little but I’m assuming that the accuracy of the finished product depends a lot of each part being accurate in itself.

I have a mill so I can machine the remaining makerslide to the correct length and make sure ends are square but that’s going to be a right pain.

I can see a disassembly video coming up

I should point out that the Makerslide I have did not come from the current Australian supplier, 3dtek. Mine came from an Indiegogo campaign about 2 years ago to produce Makerslide in Australia. Only one batch was made before the producer lost interest in it all.

My mill is quite small and getting it set up to handle a 1 metre length of stock will be a challenge so I’ve chosen the quick solution which is to buy some more MS.
For a while, I’ve wanted to build a rostock style 3d printer and the MS currently in the X-Carve will be fine for that as the squareness of the ends is not an issue.

Sounds like you have a solution, but I would think a good cut-off, radial arm, or ban saw with a good blade should be able to handle the ms aluminum, and make it truer, then what you have. To be honest I’d be surprised if Inventables supplier used anything besides a saw of some kind.

I have a metal cutting saw designed for aluminium but it’s not really suitable for taking a very small amount from each end of the MS. TOouse it properly, I’d have to shorten the MS by at least a few millimetres , which I’d prefer not to do.
The mill can be set up to shave off less than 1 mm to square up the ends - assuming I get it trammed/adjusted properly.
I have no doubt the supplier of the original MS used something like a mitre saw and the problem was with technique rather than equipment. Some of the extra MS I have, has one end cut perfectly but the other end is out of square.
I’m confident that the current supplier will provide a square cut product.